Between environmental concerns and crop management necessity, farmers can find a “sweet spot” for phosphorus applications where crops achieve optimum yields, according to Manitoba agronomists and researchers.

But finding it is the problem – there’s more to it than hitting the target level for this season’s crop needs, says John Heard, provincial soil fertility extension specialist with Manitoba Agriculture, Food and Rural Initiatives (MAFRI) at Carman.

Traditionally, phosphorus was the first yield-limiting nutrient on the eastern Prairies. Summer fallowing would meter out nitrogen when phosphorus levels were lacking. Farmers learned that the yield response to even a bit of phosphorus was very beneficial. But some soils, usually manured, contained enough phosphorus that yields only occasionally increased with the application of additional phosphorus fertilizer.

Phosphorus treatments seemed to be a well-managed non-issue for farming until about the end of the last century. Then along came better testing, abundant supplies of phosphorus-rich hog manure, spring runoff, algal blooms along beaches and major headlines. According to Heard, phosphorus just doesn’t behave the way we’d like. Research is underway to provide better answers to the big questions.

Researchers at the University of Manitoba (U of M) and Agriculture and Agri-Food Canada (AAFC) are leading studies to develop answers that agronomists such as Heard will use to give the specific advice needed for finding a ‘sweet spot’ in phosphorus application.

According to Don Flaten, soil scientist at the U of M, in recent soil testing, more than 55 percent of Manitoba fields were low in phosphorus. Levels of around 10 ppm were not uncommon in well-managed fields. “Producers and agronomists are seeing some of their most productive land decline in soil testing, specifically because crops like canola, soybeans and corn often remove more phosphorus than the farmer can put down with the seed,” he says. “It’s hard to put on all the phosphorus the canola will remove without potentially damaging the seedling, so most farmers apply a lot less.”

Flaten adds that many farmers growing soybeans are not applying any phosphorus at all. This combination means that in the oilseed phases of crop rotation in southern Manitoba, soil phosphorus levels are being drawn down.

In the past, farmers might add extra phosphate in their cereal years so that they had surplus phosphorus to balance out the deficit phosphorus in their canola and soybean years. Now, on most farms, that window of opportunity without canola or soybeans is only one year.

A third option that’s changed involves the use of manure as fertilizer. In the past, farmers who needed phosphorus could arrange to obtain manure from a nearby livestock producer who had excess manure. “The irony of this situation is, we have livestock farmers struggling with excess phosphorus in soils because we have new regulations, and we have crop producers who are concerned about low soil test phosphorus levels,” says Flaten. “We need to find a way to get these two groups of farmers to help each other out.”

Even that has become more difficult, he observes, with consolidation of livestock production resulting in fewer but larger livestock operations in many rural communities.

Applying the right amount of phosphorus to a field, or to seed, and based on a soil test, is not a straightforward proposition. The oilseeds that take out a lot of phosphorus also tend to be intolerant to large fresh doses of phosphorus, says Cynthia Grant, AAFC scientist at Brandon, Manitoba.

“Farmers tend to put low amounts of phosphorus with those crops, and put higher amounts in the cereal crops to prevent long-term depletion,” she notes. “That can be problematic because crops like flax or soybeans tend to feed from the bulk soil. Decent fertility levels in the bulk soil tend to increase the overall yield potential over time.”

Thus, if a spring soil test shows a high need for phosphorus in a given field, hitting the field with a matched application rate may be frustrating. “Putting more fertilizer on won’t necessarily solve that problem, once you’ve depleted the phosphorus that’s distributed in your bulk soil,” says Grant. “Crops like canola or wheat are very good at using fertilizer phosphorus; soybeans and flax with the same access will struggle to get the right amount.”

The traditional approach, says Heard, applied only enough phosphorus for good yield response in that season, with little consideration for future crops. “Levels for this were appropriate and closely matched the yields we achieved 20-30 years ago, but not now,” he notes. “Another fertilization approach is more commonly used in traditional corn/soybean growing areas. Determine the phosphorus level now, determine what level you want to maintain for maximum yield potential and use that difference – rather than the specific crop need for this year – as a starting place to get a healthy balance.”

Suppose that a soil test says the field has phosphorus at 5 ppm and you want to raise it to 15 ppm. Apply whatever you expect the current crop to remove and, above that, apply 20 pounds of phosphorus for each unit of increase you want to achieve above the current Olsen soil test level. (This is a general guideline based on research outside of Manitoba. Grant, Flaten and others are working on specific recommendations for Manitoba.)

However, that calculation (target ppm x 20 lb./ac) should be approached over two or more growing seasons. According to Flaten, less than 20 percent of the phosphorus applied to the field is taken up by the crop in the year of application.

If 150 lb. of P2O5 per acre was applied and 45 lb. was removed – such as by a 100-bushel-per-acre corn crop or a 50-bushel-per-acre canola crop – the remaining phosphorus would go into building soil test phosphorus. Theoretically, this would raise the soil level by about 5 ppm.

“People think phosphorus loss is permanent, that it is converted to insoluble forms and never used,” says Flaten.

John Heard grew up on the family farm in Ontario. Recently, on a trip home, he reviewed his father’s fertilizer and soil sampling experience. “When we took over the farm, both phosphorus and potash were quite depleted by renters growing hay and silage crops,” he says. “Dad carefully followed University of Guelph recommendations. The phosphorus built up slowly into the sweet spot over a number of years; he built up the potash more quickly over three or four years.

Heard now is focusing on this message at agronomy meetings. For a low test soil, gradually build phosphorus (and potash where necessary) levels by putting on more than the crop will remove until it reaches that sweet spot where yield isn’t restricted and field runoff isn’t contaminated. Once the soil test is within this working range, growers can focus on balancing phosphorus inputs and outputs during their crop rotation.

Those with very high soil phosphorus levels have the luxury – and responsibility – of using less than crop removal rates or only starter phosphorus rates in a soil drawdown strategy. 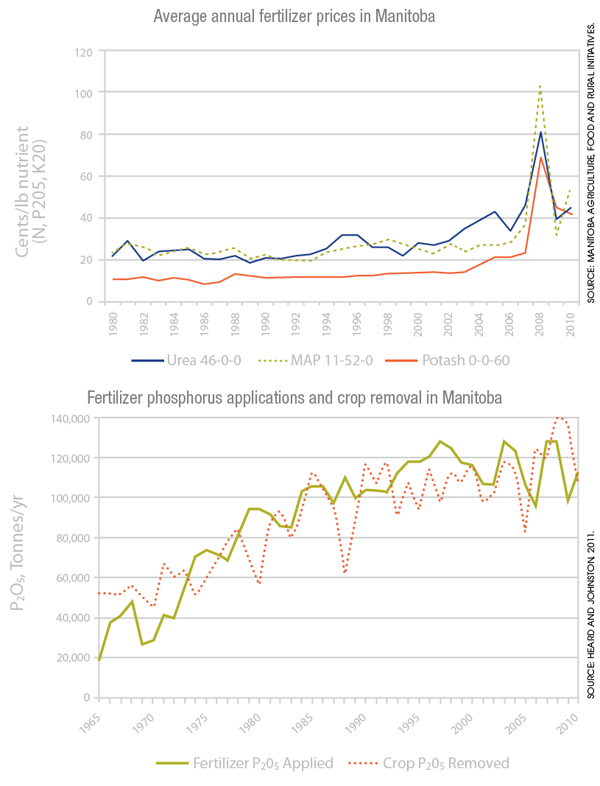 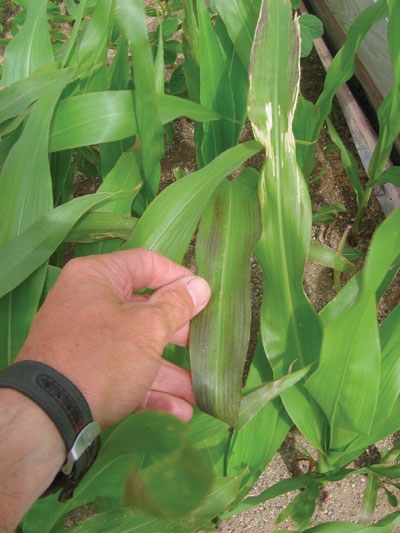 Phosphorus deficient corn showing early symptoms. There's more to it than hitting the target level for this season's crop needs.