Physiological leaf spots have been common in the Pacific Northwest of the United States for many years, and have been frequently identified on the northern Great Plains of the United States and Canada. Most frequently seen on winter wheat, the phenomenon can also been seen in other cereals. It is presumed to result from an unknown metabolic process and can reflect a genetic weakness in a plant.

“Physiological leaf spotting was a bit of an issue in 2012 in winter wheat but it can affect other cereals as well,” says Michael Harding, a research scientist in plant pathology with Alberta Agriculture and Rural Development (ARD).

“From what I’ve seen, there could be a genetic component to the susceptibility of a variety to physiological leaf spot. Some varieties may be more prone to it,” says plant pathologist Kelly Turkington at Agriculture and Agri-Food Canada (AAFC) at Lacombe, Alta.  “Some research has shown that chloride deficiency may also be a trigger for physiological leaf spots.”

Sun damage to the upper leaves may be a cause. Other stresses on the plant, such as cool, cloudy and wet conditions followed by sunny conditions, could be a trigger. Some cereal crops develop yellow flecking, and in some crops there is a brown spotting or reddish brown spotting.

“It is not always clear what the symptom is going to look like, but what we do know is that in most cases, there is an environmental component that triggers this. So if you look at the same variety in the same plot, either shaded or unshaded, you can see the radiant energy from the sun will trigger this physiological leaf spotting,” says Harding.

Don’t confuse with fungal diseases
To avoid unnecessary fungicide applications, Turkington advises growers and crop advisors to learn to recognize physiological leaf spotting and to differentiate from fungal diseases such as tan spots, scald and septoria spot diseases. Physiological leaf spots typically occur over the entire leaf, and in barley may be restricted to upper canopy leaves, whereas shaded leaves have no symptoms. Fungal leaf spots tend to have an irregular occurrence on the leaf, and fungal diseases are typically most severe in the lower crop canopy.

Physiological leaf spot symptoms start with tiny chlorotic spots. These spots can grow up to a quarter-inch in diameter. The early spots may have a halo around the edges, but mature spots usually have a distinct margin. Physiological leaf spots vary from round to oval in shape, and they may join together to leave an irregular appearance. Fungal disease spots, which tend to be moderate in size and can be oval or elliptical in shape, may have distinguishing features, as is the case with net blotch, septoria and tan spot.

Chlorotic yellowing of the leaves around the physiological leaf spot does not typically occur, in contrast to fungal disease lesions, which can have yellow areas immediately around the lesion.

Correcting physiological leaf spotting
While little can be done to prevent abiotic stresses that cause physiological leaf spotting, research in Montana has shown that in susceptible varieties of winter wheat, physiological leaf spotting can be corrected with chloride fertilizer. Engel summarized his results in a fertilizer factsheet titled Correcting Physiological Leaf Spot Damage in Redwin and Other Winter Wheat Cereals, and states that “control of physiologic leaf spot in Redwin and other susceptible cultivars is consistently achieved through application of chloride (Cl) containing fertilizers. Visual responses to Cl are particularly impressive in cultivars with considerable susceptibility (e.g., CDC Kestrel), or at sites where there has been considerable leaf spot damage. A summation of results, from 10 locations where Redwin winter wheat was grown, illustrates the relationship between soil Cl and leaf spot damage. At sites with soil Cl levels >10 lb/ac (0-24 in. depth), damage from physiologic leaf spot is minor. As soil Cl drops below a 10 lb/ac threshold level, leaf spot severity increases exponentially. Similar relationships are observed in other leaf spot susceptible cultivars, except the threshold levels for leaf spot damage differ slightly. For the most susceptible cultivar, CDC Kestrel, the threshold soil Cl level (0-24 in. depth) is approximately 20 lb/ac.”

Research in eastern Oregon also found a positive relationship between the application of Cl fertilizer and a decline in physiological leaf spot.

In Saskatchewan, a four-year study by Dr. Brian Fowler at the University of Saskatchewan found that additions of KCl fertilizer suppressed the leaf spot damage in all trials where symptoms were recorded. A summary report by the International Plant Nutrition Institute (IPNI) states that: “While the average grain yield response to KCl additions was only three per cent, sites which also had a higher incidence of root rot showed grain yield increases of up to 13 per cent. In addition, KCl applications were found to improve both kernel weight and grain protein yield, important quality characteristics for marketing of the crop. It is important to note that there was no interaction between KCl and cultivars, indicating that where responses to KCl were recorded they were found on all cultivars tested, regardless of their susceptibility to physiological leaf spot.

“Recommendations that farmers apply KCl to suppress leaf spotting and increase grain yield have been included in the Winter Wheat Production Manual published for winter wheat growers in the Northern Great Plains.”

Saskatchewan Ministry of Agriculture considers soils showing less than 30 lb/ac of Cl in the 0 to 24 in. depth to be deficient; 30 to 60 lb/ac with marginal Cl fertility and above 60 lb/ac to be adequate. These guidelines are based on criteria for winter wheat from North Dakota State University (NDSU), and are somewhat higher than the criteria noted above from Montana. At NDSU, the critical level of chloride is 40 lb/ac in the surface two feet of soil. If the soil test is less than 40 lb Cl/ac, fertilizing with five to 10 lb Cl/ac with or near the seed at planting should supply the winter wheat crop sufficiently for the year. 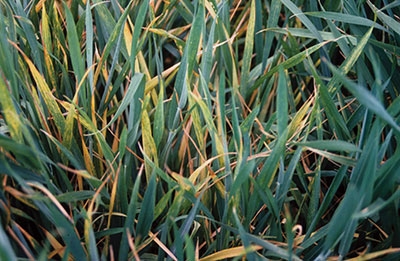 Chloride deficiency can be corrected using chloride fertilization. Physiological leaf spots have been common in the Pacific Northwest of the United States for many years.