News
Open-pollinated corn back on the market

In a small way, Ron and Linda Catt are giving Prairie ranchers an opportunity to grow corn the old-fashioned way: without hybrid vigour, but with the advantage of natural genetic diversity, if they want the choice. They have even developed their own corn brand and are selling retail to farmers.

For starters, they tried growing dwarf corn in 1999 as a cash crop with residue that would serve the cattle as a winter forage. “We looked around and thought, the land we’re cropping is fairly decent, and corn might be an ideal fit on this better land,” says Ron Catt. “We thought we’d grow corn for silage on that, and be able to run 30 to 50 more cows on the same land base.”

After a little experience with dwarf corn, they began looking for other corn options. They wanted an old-fashioned, open-pollinated corn that Mother Nature could pollinate, that could do well with a low rate of fertilizer and still produce a reasonable return – without risking the farm on the investment.

“We didn’t like the costs that were involved with other corn; they were fairly high,” says Catt. “We kept looking (for options), and that’s how we came up with open-pollinated corn.” They found a supplier in southern Ontario and planted their first bag of open-pollinated corn in 2001. Eventually, they wanted to be able to process about 50 acres of corn for silage.

Most cobs today are eight to 10 inches long. They are red, yellow, a mix with both colours, and sometimes orange. Catt Corn still is leafy, still grows seven to nine feet tall, and matures on 2150 to 2350 CHUs.

“We say it can do well on less fertilizer or manure because it has a more extensive root system than other corn,” says Catt. “Cattle tend to prefer it over other corn because it’s a little sweeter with a more tender stalk. We have a few dairy customers, who tell me their herds seem to have better health with it, too.”

Catt plants the corn crop in 30-inch rows with an average of 24,000 to 27,000 plants per acre, depending on the soil conditions and intended use. He puts on approximately 40 to 50 pounds of fertilizer, including some manure.

On the silage side, he hopes to harvest 12 tonnes to the acre. “I think 12 tonnes is a profitable crop when your inputs are not extremely high. Under the right conditions, it can do better than that,” he says.

Catt didn’t have a sheller in 2001 when they first became interested in open-pollinated corn, but they had long winter nights and curiosity about developing their own open-pollinated corn seed. “The first corn we actually shelled with our thumbs as we were sitting on the couch in front of the TV. We’ve come a long way since then. We have a proper sheller now,” says Catt.

By 2003, they were able to put 40 acres in the ground. They had a few acres in trials, too, to see if they could improve the performance. Today, they have a fanning mill for cleaning. They also have a picker, conveyors and other pieces needed for converting acres of standing corn into bags of dry seed.

“We grow about 90 acres of corn now,” says Catt. “Some is for grazing, some is for silage and some is for seed. Depending on how things are, we might pick 40 or 50 acres for seed.”

The seed business began, unexpectedly, after a few people asked them for a bit of seed. Ron and Linda spend about three weeks in the fall hand-sorting as the cobs first go into storage and dry-down. Around February, they hand-sort a second time as they feed the dry cobs into a sheller. Then, the kernels go through a cleaner and bags are filled. Samples of the corn seed are sent to a seed lab for professional germination testing.

The bags are weighed and piled on pallets, then placed in storage for spring delivery. The Catts collect orders through very limited advertising, trade shows and Internet contacts. “We try to group lots so that we can take a decent load in our cattle trailer and deliver it ourselves,” notes Ron Catt. “Customers appreciate that. They get to meet the person who’s produced the product, and we enjoy it as much as they do.”

The Catts sell their open-pollinated corn in 55-pound bags from their farm in south-central Manitoba, between Austin and Treherne. They have been selling it in Manitoba, and into Saskatchewan and Alberta for six years, and often deliver it themselves in early spring. Although most Catt Corn stays on the southern Prairies, they have sent shipments to the eastern border of Ontario, to northern Ontario and to Vancouver Island.

Online, they advertise Catt Corn as an early maturing “lower cost alternative for grazing and silage” that is seven to nine feet tall, leafy, with high nutrition and yield potential. It requires 2200 to 2350 corn heat units. Each bag contains about 100,000 kernels, enough to plant four acres of open-pollinated corn at $25 an acre. Conventional hybrids for an equal plant population retail at about $45 an acre.

Today, the Catts have met their original goal. They have increased the number of animals they can feed in winter, and they’ve added a whole new business as producers of open-pollinated corn seed. 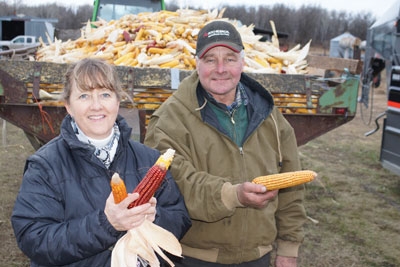 Ron and Linda Catt have developed their own corn brand and are selling retail to farmers. Prairie farmers have an opportunity to grow corn the old-fashioned way - with natural genetic diversity.