When the field is soft and the load is heavy, it would be nice to be able to replace the tires and wheel assemblies with a nice wide set of tracks. Some big farms are starting to do just that, with the help of new transferable track systems from two manufacturers.

In Ohio, J&M Manufacturing has introduced the Storm Tracker track system as a replacement option for the wheel assembly on J&M grain carts. Storm Tracker is 146 inches long, 42 inches high, and weighs 11,350 pounds. It has 36-inch-wide belts for maximum flotation and reduced wear. It uses 24 hubs and has four mid-roller bogies on pivots. A leveraged airbag provides automatic tension control for the belts. Load is distributed across 52.5 square feet (7560 square inches). The compaction rating is 7.78 pounds/square inch when carrying a 1050-bushel load of corn.

J&M’s track system keeps the belts on the ground and floats over uneven points. It has a large pivot shank, four pivoting mid-roller bogies and a leveraged air spring to reduce compaction and maintain maximum effective surface area over uneven terrain.

Storm Tracker has been developed for service under the J&M large-capacity gravity wagons. Transfers can be done in most farm shops or yards with the proper equipment in a couple of hours. Market price for Storm Tracker is approximately $69,000.

In Manitoba, Elmer’s Manufacturing has introduced Transfer Tracks with a 10-bolt hub interface. The system, which can serve under several makes of grain carts, air carts, liquid caddies and other implements, is available now through dealers in the United States and Western Canada.

“The market for these tracks is in two areas,” says Eric Braun, sales and marketing manager for Elmer’s Manufacturing. “The constant market is in the compaction problem areas such as northern Alberta and Montana, due to the soil types and weather. They are looking for better emergence in their wheel tracks after seeding.”

The second market is seasonal and occurs with wet conditions on the Prairies and Great Plains. For a few weeks every year, farmers need better flotation to get the crop in or get the crop off.

“We are confident we’ll be seeing tracks on seeding tools in Montana for seeding winter wheat or spring wheat, and on grain carts for the fall,” says Braun, who adds Elmer’s will have distributors in Montana and other northern US states for 2013. Market price for the Transfer Tracks is about $47,000.

Guenter Jochum and brother-in-law Tim Winter are early adopters of the Transfer Tracks system. They farm on Red River clay gumbo west of Winnipeg, Manitoba, near the village of St. Francis Xavier, growing at least seven different crops on about 7200 acres. They struggle with compaction and wet clay, especially in spring and sometimes at harvest.

“The duals of the air cart ran exactly in the caster wheel tracks of the disk drill,” says Jochum. “With the air cart full you would have four-inch ruts in the seeded field, and this was a problem. Compacted soil causes uneven emergence and makes for a rough field. Plus, trying to smooth over those tracks in one or two passes doesn’t always work.”

Their major tractors and combines already were equipped with tracks when they learned about the new option for carts.

“Our air carts and grain carts are only used seasonally, so we thought that a transfer system would be ideal,” says Jochum. “It seemed like putting our bigger equipment on tracks was the next logical step.”

The Transfer Tracks arrived in spring 2012. They installed the system under their 550-bushel Bourgault 6550ST air cart. They did the first changeover in less than two hours. On the soft clay field, the system accomplished what they wanted.

The belts under the cart smoothed out the two-inch indent from the caster wheels, leaving a smooth field finish.

For harvest, the partners transferred their track system to a non-Elmer’s 1000-bushel grain cart, without the 10-bolt hub. The fit was less than perfect, and after a few days of wear, they had to change bolts and reinforce the interface.

“We were very happy with the performance after we fixed it up, but we also had a very wet harvest,” says Jochum. “My guys really liked the way it (the cart with Transfer Tracks) rode across any sprayer ruts; there was no bouncing.”

Michalchuk discovered the track system was too long to replace and support the rear wheels for his 90-foot SeedMaster drill, or else he might have needed four sets.

“I had two 1500-gallon tanks on the fertilizer wagon and spindles were breaking off the duals because the weight was so far out. I took the tires off, changed over to 10-hole spindles, and put the tracks on,” says Michalchuk.

The tracks worked so well under the air cart and wagon that Michalchuk decided to put the third set under his 1000-bushel Elmer’s grain cart as a permanent installation. “Next year, I’m going to put on three anhydrous tanks because the track will carry that much weight without much trouble,” he notes.

Michalchuk measured compaction after seeding, in tire tracks and belt tracks. It confirmed what he expected, there was compaction of seed rows under the tires but not under the tracks.

“Tracks leave a ridge on either side of your seed row. We probed right where the seed was, and found no compaction. The track actually packs the hump between the 14-inch seed rows,” he notes.

The whole driving experience changes when towing a heavy cart on tracks. “They tow really nice on the highway, and on the field. With tires, you could see it bouncing and the crop was shorter in those areas. With the tracks, the field is smooth and so is the ride.” 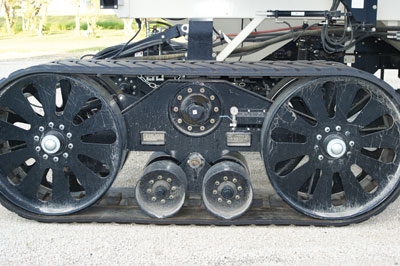 The Transfer Tracks system with its 10-bolt hub interface can serve under several makes of grain carts When the field is soft and the load is heavy - check out these new transferable track systems.