Foliar fungicides, in-crop nitrogen, plant growth regulators. Can using one or more of these practices ramp up Prairie wheat yields and profits? A major project is helping to answer that question for Alberta growers.

“The 10-year average yield for spring wheat in Alberta is about 47 bushels per acre. If we could use combinations of these advanced agronomic practices to bump up the provincial yield by even 25 per cent to 59 bushels per acre, that would be really exciting,” says Sheri Strydhorst, an agronomy research scientist with Alberta Agriculture and Forestry, and the lead researcher on this project.

The project involves two province-wide small plot experiments. Experiment 1 is testing 48 different combinations of the advanced agronomic practices on AC Foremost, a Canada Prairie Spring (CPS) wheat variety. The researchers are looking for positive and negative interactions between the practices, and evaluating how the different treatments affect wheat yields and profitability.

In addition, the project is linking to Wheat 150, a multi-year, multi-location strip trial. Wheat 150 is testing advanced agronomic practices similar to the practices used in Strydhorst’s small plot experiments. So her project is providing some replicated data and additional statistical analysis around the Wheat 150 results. By bringing together the data from both studies, the resulting information should be even more relevant to growers.

Three years, five sites, many treatments
The wheat project runs from 2014 to 2016 at five locations: an irrigated site and a dryland site near Lethbridge; an east central Alberta site at Killam; an Edmonton area site at Bon Accord; and a Peace Region site at Falher. The other researchers in the project are Doon Pauly and Robyne Bowness, both with Alberta Agriculture and Forestry, and Kabal Gill with the Smoky Applied Research and Demonstration Association.

“It’s a big, ambitious project, but it is also very exciting,” Strydhorst says. “At the end of the project, we’ll have 15 site years of data, which will be a huge, robust dataset.” That dataset should enable the researchers to determine which practices consistently boost wheat yields.

In Experiment 1 for the advanced practices, the in-crop nitrogen treatment is urea ammonium nitrate (UAN) applied just prior to growth stage BBCH 30 (end of tillering, just before stem elongation). “We apply nitrogen fertilizer at seeding, as producers would, and then prior to growth stage 30, we apply either 34 kg N/ha, or 68 kg N/ha, or 34 kg N/ha plus Agrotain. Agrotain is a urease inhibitor, so it helps prevent nitrogen loss,” Strydhorst says.

She adds, “To get the staging right, you need to pull out some plants, cut the stem [lengthwise], and look for the nodes and the heads moving up the base of the stem.”

In Experiment 2, the advanced treatment package is 34 kg N/ha plus Agrotain, the Manipulator application, and the dual fungicide application.

“For the 12 wheat varieties, we have different classes and different varieties within each class. Also, we’ve tried to capture some of the most popular varieties by acreage and some of the new genetics,” Strydhorst notes. The CPS varieties in the experiment are 5700PR, AC Foremost and AAC Penhold. The General Purpose wheats are KWS Sparrow and KWS Belvoir. The soft white is AC Andrew, and the hard reds are Harvest, CDC Go, Stettler, CDC Stanley, Thorsby and Coleman.

Fungicides show biggest benefit in 2014
For Experiment 1 in 2014, Strydhorst says, “The main finding was that the crop’s responses depend on moisture. Last year at our sites, we had growing season precipitation ranging from four inches at Falher to 16.8 inches at the irrigated site near Lethbridge. When we had good moisture, we tended to get better responses to the advanced practices.

“For example, with the in-crop applications of UAN, we saw up to 11 per cent yield increases when we had good moisture. When we had drought stress, we saw yield decreases because the nitrogen was burning the leaves.” Although applying extra nitrogen to a drought-stressed crop doesn’t make sense in a farming situation, Strydhorst explains that it does make sense for this research. “From a scientist’s perspective, we do that to understand where some of the cut-offs are, like how much drought stress can occur before you get serious impacts.”

The situation was similar with the PGR applications: in some cases a yield decrease occurred when a PGR was applied under drought conditions. Again, a grower would not apply a PGR in very dry conditions; PGRs are used to shorten and stiffen wheat stems to reduce the risk of lodging, and lodging would not be an issue in a drought-stressed crop. Strydhorst notes, “The label says do not use these products in drought conditions. The problem for growers is how to define drought stress. So in this study, we are measuring soil moisture before, during and after the plant growth regulator application. That way we know how dry the soil can be before you shouldn’t use a growth regulator.”

According to Strydhorst, the most exciting responses in 2014 were for the fungicide applications. “At our Lethbridge dryland site, we saw a 48 per cent yield increase with the dual fungicide applications. That site had excellent moisture and high disease pressure, [plus AC Foremost is a disease-susceptible cultivar]. And those are the conditions when you’ll see large responses to fungicides. We saw yield responses to the fungicides at four of the five sites; the exception was the drought-stressed site at Falher.”

The later fungicide timing resulted in the greatest yield benefits in 2014. “The later timing was never worse than the early timing. Sometimes the dual applications were better than the later timing, but not by a significant amount,” she says.

Strydhorst doesn’t think the difference in the yield response to the later versus the earlier fungicide is related to the different products. Although that aspect wasn’t part of the wheat project, the
researchers did include it in the barley project where they compared three different fungicides in early, late and dual applications. She notes, “It didn’t seem to matter which product we used as long as we used the late timing; that’s where we got the benefit.”

Strydhorst suspects the later timing resulted in a greater yield response because the disease pressure came later in the growing season. However, she still has to analyze the disease results from the leaf samples they collected in 2014 to confirm that possibility.

The 2014 results from Experiment 1 didn’t show any consistent synergies among the different practices. Data from 2015 and 2016 will enable the researchers to get a clearer picture of any positive or negative interactions from combining some or all of the practices.

Variations in varietal response
Strydhorst is fascinated by the 2014 results from Experiment 2. “I think one of the most interesting things coming out of this study is that some varieties respond to the advanced practices and some don’t. For example, 5700PR tended to have higher protein with the advanced management, but not all varieties did that. And CDC Go occasionally got taller with a plant growth regulator,” she says.

“Averaged over all the wheat varieties, we saw a 10 to 19 per cent yield increase in 2014 [with the advanced practices]. At our irrigated site – which is where you’ll see the best results from these agronomic inputs because moisture is not a limiting factor – AC Andrew, Stettler and Thorsby had no significant yield increase with the advanced practices.”

She notes, “That whole package – the UAN, growth regulator and dual fungicide – costs about $93 per acre to apply. If you’re not getting a yield response, then you’re definitely better to put that money in your pocket.”

However, she cautions, “I don’t want to say that those three varieties will never respond, because we just saw that once. That’s why we need the 15 site years of data. If we see that a variety doesn’t respond to these advanced agronomic practices time after time, then growers should save their money and use the inputs on varieties that do respond.”

Strip trial links
Linking the small plot data to the Wheat 150 strip trial data is complicated, particularly due to some treatment differences. For example, Wheat 150 is using variable rate nitrogen applications, not the set rates used in Strydhorst’s project. The project’s statistician is currently working on how to compare those two datasets. Another difference is that sometimes the fungicides were not applied in the Wheat 150 trials because of timing challenges.

Despite such analytical challenges, Strydhorst is very interested in going even further with linking the project’s small plot data to strip trial data.

In fact she’s hoping other Alberta wheat growers might be willing to share their strip trial data.

“We are looking for producers who have yield map data for their strip trials, even if they are not part of the Wheat 150 trial. So if you have done nitrogen or fungicides or PGRs in strip trials and you would be willing to share your data with me to link it with the small plot data, we would love to have that data.” For more information, contact Strydhorst at sheri.strydhorst@gov.ab.ca. 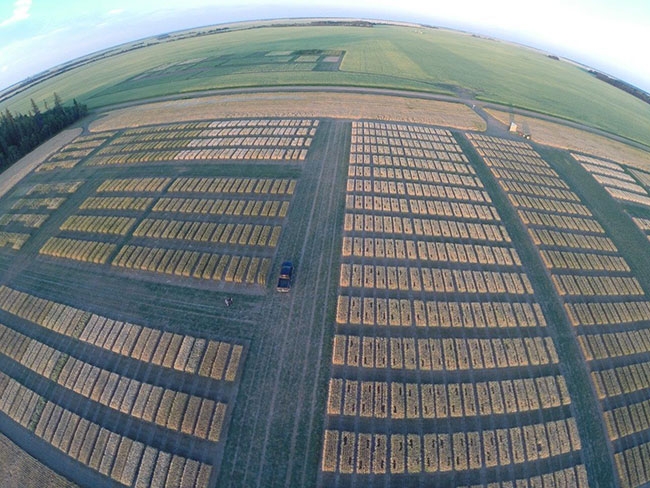 This Falher site is one of five sites in an Alberta project to test 48 different combinations of advanced agronomic practices on wheat. Foliar fungicides