The introduction of earlier maturing soybean varieties has allowed growers outside of the more traditional soybean growing area in Manitoba to successfully grow soybeans. Growers in southwestern Manitoba, southeastern Saskatchewan and increasingly more northwest areas in Saskatchewan are trying soybeans in rotation.

And, a large portion of the expanding soybean acreage in Western Canada is expected to include Roundup Ready (RR) or glyphosate-resistant (GR) soybean varieties.

According to Christian Willenborg, assistant professor in the department of plant sciences at the University of Saskatchewan, the most important requirement for growing soybeans is weed control. “Much like corn, soybeans do not tolerate the presence of weeds very well compared to crops like canola, wheat or oat. They respond very negatively to the presence of weeds, so very good weed control is required, which is why so many growers are interested in growing RR soybeans. However, many of these growers are also growing RR canola, which can volunteer and become a problem in RR soybean crops.”

Several chemical control trials under way are comparing pre-emergent treatments alone (Roundup WeatherMAX, Heat, Express SG, Focus, 2,4-D ester, Valtera), a combination of pre- and post-emergent treatments, and post-emergent treatments (Roundup WeatherMAX, Odyssey, Viper ADV, Basagran Forte, Cadet, Reflex, Solo, thifensulfuron) alone. The trials include chemistries currently used in Western Canada as well as some products that are so far only registered in Eastern Canada for soybeans, such as FirstRate (chloransulam-methyl) and FirstRate plus Express, as well as Reflex (registered in Manitoba).

The cultural control trials include three targeted seeding dates: early May, mid-May and early June. Seeding rates include 10, 20, 40, 80 and 160 plants/m2 (42,000, 83,000, 165,000, 330,000 and 660,000 seeds per acre). Where possible, soybeans were seeded in plots on land that had been planted to glyphosate-resistant canola in the past two years. Volunteer canola populations were supplemented to achieve a population of 40 plants/m2, though actual densities achieved approximated 20 plants m2 in 2014. In the trials, information including crop and weed counts, and biomass, thousand seed weight, yield and percentage of canola seed in harvested grain sample is being collected.

Preliminary results after only one year of the study are showing some promising options. “In the chemistry trial comparisons, we found some pre-emergent treatments alone did not always provide control long enough into the growing season to provide acceptable control because volunteer canola can flush at different times,” Willenborg explains. “Some post-emergent applications alone also did not provide enough control, as in some cases the growth stage of the volunteer canola was too advanced for acceptable control.

Although all the products provided good control, some of the trials showed a higher risk for crop damage due to the nature of some Saskatchewan soil conditions. “Some of the products, because of the soil texture, organic matter and in some cases excessively wet or dry conditions, may result in some products having too much of a residual or carryover effect,” Willenborg says.

The project continues for another two years, at which time more complete results and recommendations will be available.

Other management strategies
Growers should consider using chemistries with multiple modes of action when dealing with RR canola volunteers in RR soybeans. “This is not just about resistance management, it is also about emergence timing of volunteer canola and controlling multiple flushes of the volunteer population,” Willenborg says.

“It is also important to recognize volunteer canola control starts in the years prior to growing soybeans, or in the canola phase of the rotation. This starts with harvest management, including proper swath timing at 60 per cent colour change to minimize pod shatter and the spread of seeds. Make sure combine settings are set to minimize volunteer seed return or harvest losses to minimize additions of canola to the seedbank.”

At the University of Manitoba (U of M), graduate students are working with Rob Gulden, associate professor in the department of plant science, to study economic thresholds of volunteer canola in soybeans and seedbank management of volunteers. “In the first study, soybeans seeded with wide rows (30 inch) and narrow rows (7.5 to 10 inch) are being compared in terms of densities of volunteer canola,” Gulden explains. “Volunteer canola can be quite competitive with soybean and it is not a surprise that it likes to grow fast in the spring and over-tower the soybean crop. The preliminary action thresholds developed from this study, which were measured at five per cent yield loss, are two to three volunteer canola plants/m2 in narrow row plantings and about the same in wide rows.”

In field surveys, densities of volunteer canola were often much below the threshold, although there were patches where densities were above. In many cases the visual assessment looked worse because flowering canola is taller than soybean, but the actual thresholds weren’t necessarily an economic concern. However, growers should still be controlling canola volunteers much earlier.

“At higher volunteer canola densities, narrow row spacing always had lower yield losses than wide row spacing at the same soybean densities,” Gulden says. “A couple of the wide row trial sites had some unexpected results, so we are planning to continue the study for another year to refine the thresholds for both wide and narrow row spacing.”

The second U of M project is looking at seedbank management of volunteer canola right after harvest to drive down the seedbank. “Our results so far are showing that relatively early soil disturbance to some degree after harvest may be a good strategy, which is different than from what is being reported in Europe,” Gulden notes. “The disturbance can be as little as a pass with a harrow shortly after harvest, or a shallow tillage operation to encourage volunteer germination and emergence in the fall and decreased winter survival of the seedbank. Some of the treatments included planting a winter wheat crop into canola stubble, which had the same effect. Late tillage or disturbance did not work as well. We also have other projects looking at other alternatives underway.”

Willenborg adds while limiting tillage keeps volunteer canola near the surface, allowing it to be exposed to winter elements and seed predators such as birds, rodents and insects, tillage itself can induce dormancy and impede removal efforts, much like with cleavers. “Consider adding a cereal to the rotation, which allows for greater competition, and herbicides that provide good control of volunteer RR canola,” he says. “Soybeans don’t compete well, so enhancing row spacing and increasing seeding rates improves competition with volunteers. Managing fertility effectively and good integrated crop management practices including preseed and post-emergent herbicides that sets the soybean crop up to outcompete volunteers will be critical in the long-term management of growing RR soybeans and RR canola.” 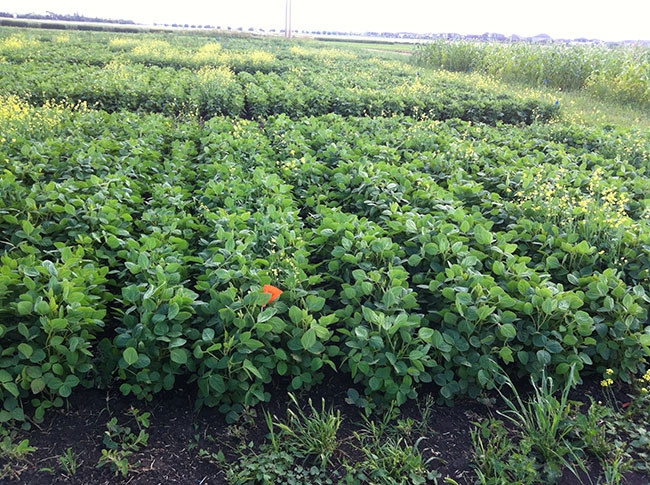 RR canola in RR soybean trials at the University of Saskatchewan in 2014. The introduction of earlier maturing soybean varieties has allowed growers outside of the more traditional soybean growing area in Manitoba to successfully grow soybeans.