In the 1930s, wind erosion had severe effects on soil quality across the southern Prairies. By the 1940s, adoption of strip farming and the use of the Noble blade cultivator reduced the frequency and severity of wind erosion. But wind erosion continued to be a problem into the 1980s. By the 1990s, the gradual adoption of direct seeding to leave a protective crop residue on the land surface had greatly diminished wind erosion problems across the Prairies.

Wind erosion events still occur occasionally when soils are left bare after harvest of row crops on irrigated land. However, fire is now the major culprit that leads to soil erosion. When fall conditions are warm with very little precipitation, dry residue on the soil surface becomes an excellent fuel source. The combination of wind and fire means hundreds or even thousands of acres can burn rapidly, leaving soil susceptible to wind and water erosion. When a fire does occur, organic matter recycling back to the soil is lost, valuable macro- and micronutrients are lost, and the protective cover on the soil surface is lost.

Wildfires in the fall or early spring are becoming increasingly common. A severe fire occurred west of Lethbridge, Alta., on Sept. 10, 2012, burning about 30,000 acres of annual crop and grassland, and even threatened the western side of the city.

When a wildfire occurs after mid-September, it is usually too late to seed a winter cereal crop to provide protective crop cover for soil. Normally, winter wheat needs to be established in the first two weeks of September to provide adequate protective cover. Often due to the time of a fall fire, it is too late and soil conditions are too dry, making it impractical to seed a winter cereal crop.

For smaller areas that are burned, spreading straw and/or application of high rates of manure can be used to quickly provide cover on soil to prevent wind erosion. However, this becomes less practical for large burn areas.

To reduce wind erosion potential after a fire, fields that have loam to clay loam (medium- to fine-textured) soils may need to be worked using cultivators with spikes to roughen the soil surface and bring up soil clods to the soil surface. The roughened soil surface is intended to reduce the potential for soil particles to roll and bounce along the soil surface to become airborne. This is a practice used for emergency wind erosion control. It is very important that land be worked at a 90-degree angle to the direction of prevailing winds. When spiking a field, leave alternate untilled strips, as these may need to be spiked when wetting-drying and freeze-thaw processes break down soil clods in the initially tilled strips.

For sandy soils, Lister shovels should be used, as spikes don’t produce durable soil clods; they will do a better job of ridging the soil and bring up firmer subsoil clods. Lister shovels should be mounted on the back gang of a heavy-duty cultivator and, ideally, be about 36 inches apart, penetrate to a depth of six to eight inches and create ridges that are 10 to 12 inches higher than the troughs.

Freeze-thaw and wetting-drying conditions over winter can result in breakdown of large soil clods created with tillage to roughen the soil surface. As soil clods degrade, the soils are left in a more vulnerable condition for wind erosion. Therefore, as soon as soil conditions permit in the spring, annual cropland should be worked and seeded as quickly as possible to establish cover on the soil.

Significant losses occur
When wind erosion does occur, the damage affects the physical, chemical and biological characteristics of soil:


Significant loss of fertile topsoil will result in crop yield loss. Considerable soil conservation and erosion research has been conducted by scientists at Agriculture and Agri-Food Canada’s Lethbridge Research Centre. A research trial conducted by Dr. Frank Larney on a Dark Brown dryland soil with topsoil stripped off at zero-, two-, four- and six-inch increments examined effects on subsequent wheat yield. In the first year after stripping, wheat yield declined by 40 per cent when two inches of topsoil was removed compared to the control treatment. In the second year after stripping, chemical fertilizers where used to examine restoring soil productivity. Results showed added fertilizer only partly remedied yield losses. Responses to N and P were more effective at moderate levels of erosion and less effective as the depth of stripped soil increased.

This study also compared the efficacy of livestock manures, crop residues, and combinations of straw and chemical fertilizer in restoring soil productivity. The overall best amendments were manures and alfalfa hay. Application of feedlot manure at a rate of 30 to 50 tons per acre, or an equivalent amount of hog or poultry manure, will go a long way to improve the physical condition of the soil and increase the nutrient levels of the soil. While this amount of manure may sound like a lot, most eroded soils are very deficient in nutrients. Livestock manure will help to improve both the physical quality and the fertility of the soil.

Reclaiming eroded soils is a very long, slow process. Soil sampling of each field is needed to determine soil nutrient levels, soil organic matter levels and chemical factors such as surface soil pH. After severe soil erosion events, soils have reduced nutrient levels and potential nutrient from soil release for crop growth is reduced. Therefore, higher rates of fertilizer are needed to offset the nutrient losses. Ideally, application of livestock manure is the most effective means of restoring soils to a reasonable production level, particularly on the more severely eroded areas. In areas with a higher level of stones on the soil surface where severe erosion occurred, stones should be removed.

A crop rotation plan should be developed, along with a well-developed fertilizer and manure management plan for each eroded field. In developing the crop rotation plan, consideration should be given to establish a forage crop, rather than annual crops, in more highly eroded fields. Establishing a permanent crop for four to five years will help build up the soil organic matter level and increase root material, root mass and root channels, all of which are very beneficial.

Immediately after harvest each fall, land managers may want to consider cultivating strips about 100 to 150 feet wide in a north-south direction every one-quarter mile, to serve as “fire guards,” so that in the event a wildfire does occur, the guards might help to reduce the rapid spread of fire. With very high velocity winds, burning embers can blow over a 150-foot fireguard, but guards might be effective to at least reduce that rapid spread of a wildfire and provide additional time to bring it under control. 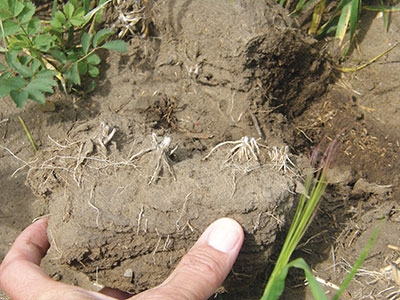 Close-up of exposed plants and roots. Note tops of stems were burned and roots are exposed showing soil loss. In the 1930s