By now, most Canadian farmers are familiar with Tier 4 regulations, the reasons behind them and the technology involved. For us here in North America, it all began in 1996, when the U.S. government passed laws forcing off-road heavy equipment makers to gradually reduce the pollutants and particulates in engine exhaust. These laws – starting with Tier 1 and phasing through stricter and stricter Tier 2, 3 and 4 regulations throughout the years – are aimed at helping to reduce smog and acid rain, as well as associated crop damage and respiratory problems. The U.S was following Europe’s lead, where heavy equipment manufacturers were already developing emissions-reduction technologies to meet legislative changes there.

Canada got on the Tier 4 bandwagon in 1999, when the federal government passed the Off-Road Compression-Ignition Engine Emission Regulations, which fall under the Canadian Environmental Protection Act. These standards were applicable to 2006-and-later diesel engines such as those found in agriculture and construction machinery.

“The standards, which are aligned with the U.S. Environmental Protection Agency (EPA) standards, were amended to include the EPA Tier 4 emission standards starting in 2012,” says Danny Kingsberry, a media relations officer at Environment Canada. “The upgrade to Tier 4 emissions standards for off-road diesel engines provides significant benefits in terms of improved air quality and reduced exposure to air pollutants and toxic substances.”

At this point, manufacturers already must meet Tier 4 Interim standards for some horsepower ranges, and must meet Tier 4 Final by Jan. 1, 2014, for equipment larger than 175 hp. They have an additional year to make sure equipment between 75 to 175 hp meets the regulations.

These are the two emissions-reduction systems being used:


Which technology is used generally depends on what is required of the engine and the process that the machine is intended for. CEGR is well suited to steady engine RPMs, where fairly constant exhaust temperatures aid in the reduction of particulate matter. SCR is better for engines that must meet variable demands. It provides ongoing fresh air to the engine, allowing it to run at peak performance through the full RPM range.

Tractor engines fall somewhere in between, with steady RPMs needed for jobs like spraying a uniform field but variable power demands required for other tasks. For that reason, and because the Tier 4 Final standards are so much stricter than Tier 3, some tractor manufacturers like John Deere will likely employ both CEGR and SCR for Tier 4 Final.

Roger Hoy, director at the Nebraska Tractor Test Lab (the officially designated tractor testing station for the United States), says, “Cummins has confirmed with me that they will use both.” He notes that full power can be achieved with either SCR or CEGR individually, but that CEGR uses a little more fuel.

AGCO is another company using both types of technology to meet Tier 4 Final requirements, but it is using its patented SCR with only a small amount of CEGR to ensure nitrogen oxides are reduced in the cylinder. “This combination provides our customers fuel economy benefits, lower fluid consumption (fuel and DEF), longer engine service intervals and longer engine life,” says Conor Bergin, AGCO’s product marketing manager for high-horsepower tractors.

Other tractor makers, including New Holland and Case IH, are using only SCR. Leo Bose, commercial product training manager with Case IH, says his company chose SCR over CEGR because carbon in recirculated exhaust can be deposited into engine oil, creating the possibility of wear. “Using our patented SCR system allows our high-horsepower tractors and combines to lengthen service intervals,” he says, adding that it also keeps things simpler in terms of overall design to use only one system.

Operation and maintenance
The development and physical cost of any new add-on technology such as SCR or CEGR is, of course, passed on to the customer. On the positive side, however – besides the benefit of cleaner air – there is good news in that no action is needed to manage Tier 4 technologies by the tractor operator during ongoing operation.

During ongoing CEGR operation, the DPF filter is automatically “regenerated” (the particulate matter in the filter is reduced to ash) in three ways. The emissions-reduction interface in the cab lets the operator know what’s occurring. Passive regeneration occurs during ongoing operation, and active regeneration occurs when sensors detect that particulate matter has accumulated to a certain level in the filter. Diesel fuel is injected into the exhaust to increase its temperature. Sensors also indicate when forced regeneration is required. The engine must sit idle while the engine control unit conducts a very high temperature cycle. The ash that remains is not combustible and must be cleaned out. However, regulations require that this situation occur only after at least 4,500 hours of engine use, and some manufacturers claim it need only be done once or twice in the lifetime of the tractor. Low-ash engine oil with a CJ-4 rating is a must. The only maintenance required with SCR systems is checking the DEF filter and refilling the DEF tank when needed.

Companies are touting Tier 4 tractors as the most fuel-efficient ever, but that has nothing to do with Tier 4 technologies. As Barry Nelson, John Deere’s media relations manager, agriculture and turf division, points out, Tier 4 emissions technologies consist of after-treatment exhaust systems. He says fuel efficiency gains have been made through things like electronic fuel injection, more efficient transmissions integrated with engine performance, and other cutting-edge electronic systems that adjust fuel usage according to many engine factors on a second-by-second basis. 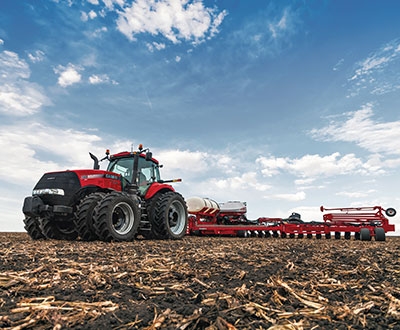