This past year, the report notes, most areas of the province received 150 to 200 per cent above the normal amount of precipitation on what was an already saturated landscape. Due to this record rainfall during the first half of the 2014 growing season, many areas have as much or more water on the landscape than in the fall of 2010.

Consecutive years of above normal precipitation have resulted in larger wetlands areas across the province remaining near full heading into the winter, and many creeks continue to flow at or near record levels for this time of year. The majority of the subsoil across the grain belt appears to remain fully charged, reducing the infiltration capacity of the landscape in the spring of 2015. 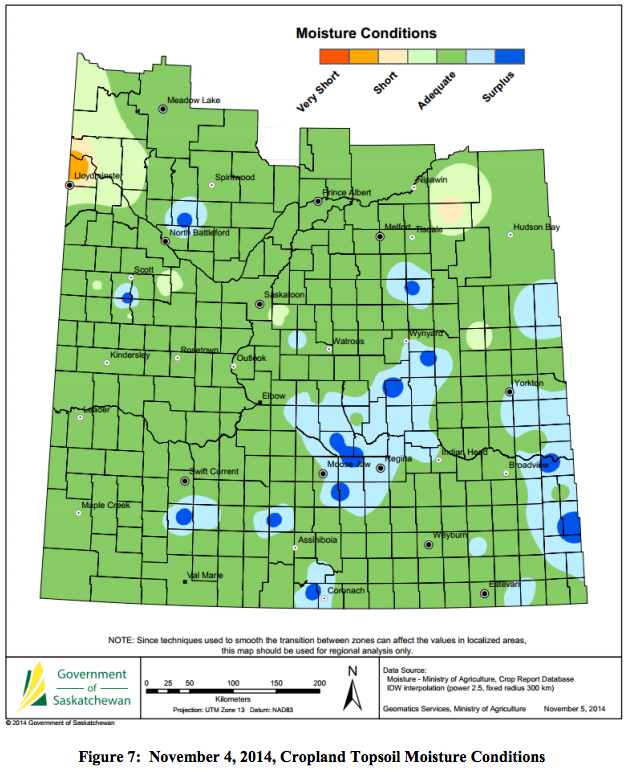 Depending on the amount of precipitation experienced over the winter, this could increase the risk of flooding in certain areas during the 2015 snowmelt. At this time, a near normal snowpack this winter could result in an above normal spring runoff.

Since 2011, the Government of Saskatchewan has provided more than $30 million to assist in the construction of 600 permanent works across the province. These mitigation efforts, such as the installation of permanent berms and culverts, will assist in protecting property in the event of future flooding.

Precipitation conditions will continue to be monitored by the Water Security Agency, and Spring Runoff Outlook reports will be issued beginning in February of 2015. The complete fall conditions report can be viewed at www.wsask.ca/fallconditions.