Study results show there is potential to direct plant-AM fungi symbiosis through breeding. 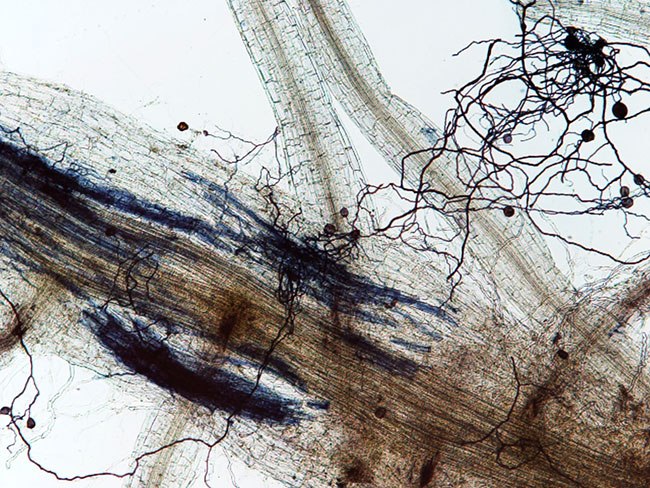 Part of a durum wheat root naturally colonized by an arbuscular mycorrhizal fungus. Some hyphae are seen radiating from the root surface, bearing several large spores of the fungus; others are within the root tissues. Photo courtesy of Walid Ellouz.

Arbuscular mycorrhiza (AM) are symbiotic relationships between plant roots and fungi. Research has only described a relatively small number of fungal species, but it is known that they can help crop plants extract nutrients from the soil and protect them from environmental stressors.

In 2018, researchers at Agriculture and Agri-Food Canada’s (AAFC) Swift Current Research Station in Saskatchewan published a study looking at interactions between durum wheat genotypes and AM fungal communities.

Because not much is known about how interactions between plants and soil micro-organisms work, it’s a happy accident when new wheat genotypes have beneficial relationships with AM fungi. The purpose of the study was to lay some foundations for future breeding projects that could deliberately take advantage of that compatibility.

“Growing wheat varieties with improved compatibility with beneficial soil micro-organisms can be a powerful way to manage soil micro-organisms and a good strategy to enhance soil nutrient use efficiency in agro-ecosystems,” explains Oualid (Walid) Ellouz, the publication’s first author.

Ron Knox, a plant pathologist and geneticist at Swift Current, was involved in the study’s big-picture planning. He says early on he was hoping to see whether it was feasible to combine durum genotypes with species of mycorrhizal fungi to promote crop growth.

But the question was naïve, he says, due to the complexity of soil flora and the difficulty of evaluating which relationships are beneficial to the crop.

“It’s a really difficult thing to measure,” Knox says. “There is a vast array of different interactions – you have these three-way interactions as environmental interactions are superimposed over two types of organisms coming together, and soils are variable and change from region to region, and those soils are exposed to different climates.” 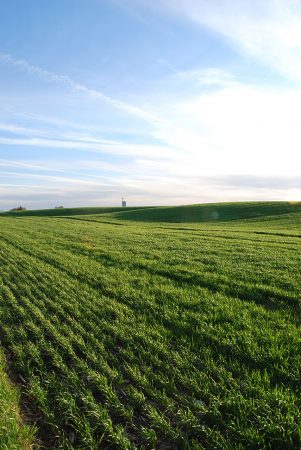 Study design and results
A field study comparing 32 genotypes of durum wheat was set up at two sites in Swift Current and Regina. The genotypes chosen included a set of five landraces that had been introduced to Canada before 1920, as well as cultivars developed at various times in the subsequent period, including six recent cultivars.

Knox says the team wanted to include wheat that was not exposed to modern farming practices, such as the use of inorganic fertilizers; most varieties are now selected and bred using these cultural practices. The study’s breadth of genotypes allowed them to evaluate whether there was a difference in how older and newer varieties performed.

In previous research, Ellouz adds, the team had found little evidence that landraces regulate AM symbiosis better than modern varieties. “Plant breeding had inconsistent effects on AM symbiosis, and cultivars with a range of AM symbiosis efficiencies from unimproved to inefficient have been developed,” he says.

The study found that durum wheat genetic selection seems to have a positive impact on plant-AM fungi symbiosis, Ellouz says.

But very different root- and soil-inhabiting AM fungal community structures were found at the two sites. Ellouz believes this is perhaps due to the use of summer fallow every other year in
Regina. “Climate, soil properties, and field management influence the composition of AM fungal communities,” he says.

“No matter the cause of variation in the AM fungal community from site to site, it appears that site characteristics had a stronger influence than plant genotype did.”

Knox says that the results of the study make it clear that there is potential to direct plant-AM fungi symbiosis through breeding, but this is still “way down the road.”

“There are a lot of questions that need to be answered before breeding can coincide with the microbiology research which would be needed to look at whether there is an increase in productivity,” he says.

Ellouz adds that researchers will first need to learn which alleles of which genes in wheat are involved in favourable relationships between wheat roots and fungal communities.

But it’s a worthy goal: this kind of symbiosis can lead to increased yields with lower inputs, which will reduce crop dependence on fertilizers and benefit producers’ bottom line.

“Wheat genes responsible for AM fungi compatibility need to become a breeding target to reduce crop dependence on fertilizer, environmental impacts of fertilization and farm input costs,” he says.