Some fungi such as Fusarium and Penicillium can infect the grain of corn, wheat and other cereals and may produce toxins under certain conditions. Preventing or minimizing the accumulation of these toxins is very important for ensuring food and feed safety and for maintaining the grain’s value in the marketplace. A recent study shows that ultraviolet (UV) light might offer another way to decrease fungi and fungal toxins in harvested cereals. 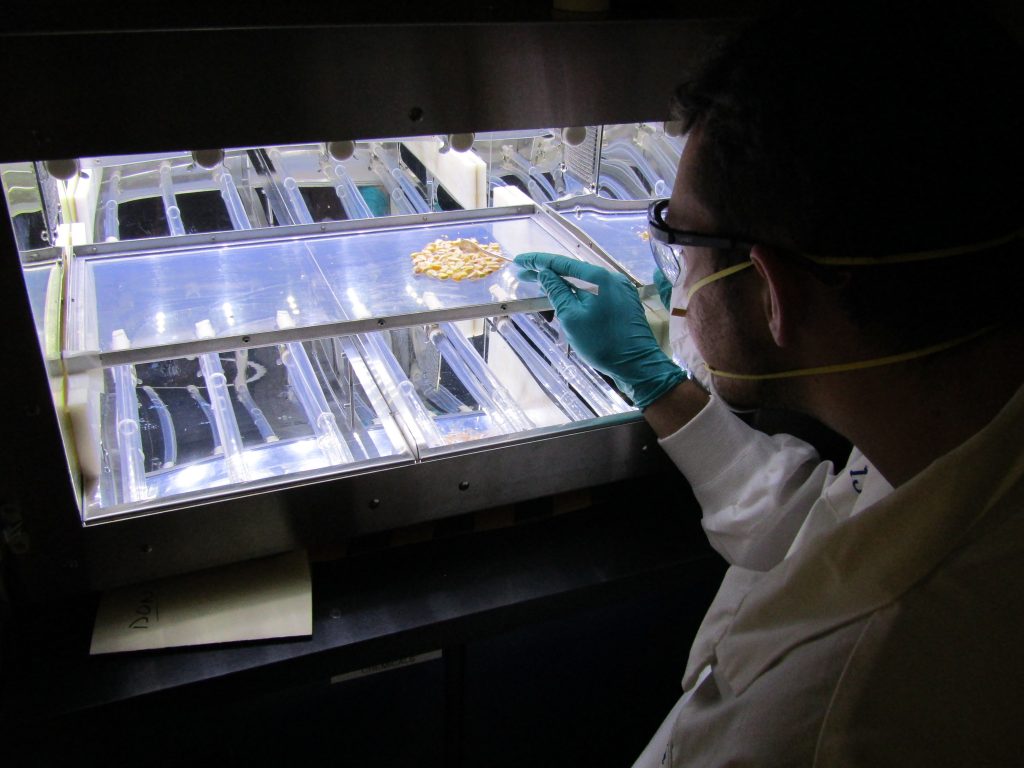 The researchers found that ultraviolet light could inactivate fungi and degrade toxins on corn and wheat kernels. Some fungi such as Fusarium and Penicillium can infect the grain of corn

“Ultraviolet light is already used in the food industry [to kill or suppress pathogens]. The main applications are for the treatment of drinks and beverages, food contact surfaces, food surfaces and the air in food processing facilities. It is also widely used for water treatment,” explains Tatiana Koutchma, a research scientist with Agriculture and Agri-Food Canada (AAFC) in Guelph, Ont.

UV light is classified by its wavelength into UV-A, the longest wavelengths, UV-B, medium wavelengths, and UV-C, the shortest of the three. Light in the UV-C range (200 to 280 nanometres) is used for treating microbes like fungi, bacteria and viruses.

In addition to wavelength, several other factors influence the effectiveness of the treatments. UV-C light has to reach a microbe to “inactivate” it – to make the microbe incapable of reproducing and causing disease – so the optical properties of the item to be treated are a key factor. For example, clear water is transparent to UV light so the light can easily reach any pathogens in the water. Juices and milk transmit less UV light so treating them requires a more specialized approach. UV light can easily reach pathogens adhering to a smooth surface like a stainless steel countertop, whereas an item with an uneven surface may shield some microbes from the light, especially if the light comes from only one direction. Other factors include the dosage of UV-C light and the microbe’s resistance to UV-C light.

Koutchma, an expert on innovative processing technologies, has been working on UV-C light uses in the food industry for a number of years, including work on toxin-producing fungi. Previous studies by Koutchma and others have shown that UV-C light is a simple, environmentally-friendly way to inactivate such fungi, resulting in lower toxin levels, and that it can directly degrade fungal toxins. Studies also show that UV-C treated foods tend to retain their nutritional, taste and aroma characteristics.

Koutchma is now leading a research effort to determine whether UV light could be an effective method for reducing fungi and fungal toxins on postharvest corn and wheat. “The objective is to explore the feasibility of UV treatment as a postharvest intervention for reducing Fusarium and Penicillium growth at different points of [the cereal value chain] because we don’t know where exactly it can be applied yet,” she says.

The first phase of this work focused on the treatment of corn kernels and wheat kernels. Koutchma and her research team have completed this phase and have submitted a related paper to a peer-reviewed journal. This study was funded by Grain Farmers of Ontario (GFO) and AAFC’s AgriInnovation Program under Growing Forward 2.

The study targeted Penicillium and Fusarium and the toxins deoxynivalenol (DON), zearalenone (ZEN) and ochratoxin A (OTA) because those fungi and toxins were the major concerns identified by GFO and AAFC. All three of these toxins, DON, ZEN and OTA, each have the potential to cause serious health impacts in humans and animals.

Various Fusarium species can infect grain and produce toxins. One of the most important is Fusarium graminearum, which causes Fusarium head blight in wheat and other small grains, and Gibberella ear rot in corn. Fusarium graminearum can produce several toxins, including DON and ZEN. Warm, moist conditions during flowering favour development of this fungus and the production of DON and ZEN.

In the study, Koutchma and her research team developed a methodology for using UV-C technology with corn and wheat kernels, including optimizing the exposure of the samples to the light, determining which dosage was most effective for reducing each of the fungi and each of the toxins, and figuring out how the sample’s characteristics influenced the effectiveness of the UV treatments.

They used a special UV-C unit with low-pressure mercury lamps for the treatments. These lamps are commonly used in the food processing and water treatment industries. The lamps are called monochromatic because they emit light at a single wavelength of 253.7 nanometres. The UV-C unit used in the study surrounded a UV-transparent shelf with UV-C light from all sides to provide 3-D treatment of the samples placed on the shelf.

First, the team applied the UV-C treatments to the two fungi growing on agar (a growth medium) and the three toxins on filter paper. Next, they applied the treatments to corn kernels and wheat kernels that had been spiked with the fungi and the toxins.

For the fungi on agar, UV-C light reduced fungal spore counts by 90 to 100 per cent. For the toxins on filter paper, the treatments lowered toxin levels by 70 to 95 per cent.

For the kernels, the treatments reduced the fungi and the toxins, but did not eliminate them completely. For example, fungal growth of Fusarium and Penicillium on the corn kernels was reduced by 50 to 75 per cent. The toxins on the corn kernels were reduced by 15 to 50 per cent. The study’s results also suggest UV-C might be more effective at other points in the cereal value chain than the kernels.

The UV-C treatments were more effective for inactivating Penicillium than Fusarium. The treatments didn’t have any adverse effects on the grain’s crude protein content, moisture content, colour or germination.

Based on the results from this initial phase, Koutchma would like to follow up on several possibilities in a second phase. For instance, she suspects it might be possible to improve the efficacy of the treatment of the kernels if the samples are rotated or moved past the UV-C source, rather than just sitting still on the shelf.

As well, she wonders if some other UV-C light source might be more effective. “The doses we determined for the kernels are higher than for water treatment. So in the future, we would like to compare different types of UV sources. For instance, instead of using low-pressure mercury lamps, maybe for some applications medium-pressure mercury lamps would be more effective because their intensity is higher, so the treatment time would be shorter, and they have a polychromatic spectrum.” A polychromatic spectrum would allow users to adjust the lamp’s wavelengths to suit the specific characteristics of the item to be treated.

Koutchma would also like to explore where along the cereal storage/handling/processing chain that UV-C light treatments would be most useful for growers and processors. She notes, “The cost of the technology is quite affordable. But we need to have more discussions with the grain producers on this and look at our results and consider how they could be applied.”