Researchers at the University of Guelph are looking at the connection between soil biodiversity and soil health using new research, along with data collected from a long-term cover crop trial dating back to 2008.

“We are looking specifically at soil health,” explains research lead Kari Dunfield, an associate professor at the University of Guelph and a Canada research chair in environmental microbiology of agro-ecosystems.

Attention to soil health has increased in recent years as producers look for ways to decrease inputs and increase quality and yields.
“
We’re talking about soil health a lot in agriculture, and farmers often ask me ‘Is my soil healthy?’ ‘What can I do to keep my soil healthy?’ ” Dunfield says. “However, it’s hard to measure that so what we need to do is measure indicators. If there’s less erosion or more fertility, can we say that’s a healthy soil?”

And, while the researchers know soil microbes are important, they don’t know if greater soil diversity is actually healthier.

“Healthy soil does better under certain conditions like drought and disease pressures, but the science linking soil health to soil microbes is not there,” Dunfield says. “We don’t know if a more diverse soil is a healthier soil.”

So, the researchers are looking at that in conjunction with research Laura van Eerd, an associate professor at the University of Guelph who specializes in nitrogen fertility and cover crops, is doing in Ridgetown involving the impact cover crops have on soil health.

“In Ontario, we are not entirely clear what cover crops are actually doing for the system,” Dunfield says. “They might help with erosion but we don’t see a huge spike in microorganisms. We’re adding on to Laura’s research and looking at the bacterial and fungal community of those systems.”

The project
Funded by the Ontario Ministry of Agriculture, Food and Rural Affairs (OMAFRA), the project began in 2015 and involves planting rotation vegetable crops at Ridgetown during the growing season. “The cash crop this year is tomatoes,” Dunfield says. “At the end of the year, we’ll put in five cover crops.”

Then, five or six times throughout the year, the researchers take soil from the system and graduate student John Drummelsmith extracts the DNA to look at the soil bacterial and fungal communities and quantify them. This data, Dunfield says, will tell them if fungal and bacterial communities are going up or down depending on the cover crop.

“Some people suggest in healthy bacterial-fungal ratios, fungi should be higher,” she says. “We’re going to look at that using DNA, next generation sequencing. This tells us what bacteria and fungi are there.”

Or, in other words, what the diversity of the system is. Because of van Eerd’s project, Dunfield and Drummelsmith have yield and soil measurements as well, so they will be able to see if the communities are shifting and if there is indeed a link to the soil.

“So we can say yes, more soil diversity is related to cropping systems that produce higher yields,” Dunfield says.

Preliminary findings
Dunfield and her team began sampling in October 2015. This year, they took samples in May, June and August and plan to take a couple more this fall. Early findings show there is indeed some difference in microbial communities under different cover crops.

She points out the cash crop had already been harvested for the October 2015 sampling event. More recent sampling should answer the question, “Do we see the same changes when the cash crop is there or is it transient with crop gone?”

More research to come
The researchers recently received additional funding from the Grain Farmers of Ontario to expand the project to more than one site.

“We started in one soil system and this will allow us to expand into other systems to see if we find the same results,” Dunfield says. “We are planning, in next field season, to expand to multiple field sites to expand the analysis.”

For sustainability
Research into soil biodiversity and health is vital as the agriculture sector works to create agriculture systems that are sustainable by maintaining yields with the least inputs and that also help the environment. The ever-increasing demand on Ontario’s agricultural sector to provide plant biomass in the form of crops for food, animal grain and even biofuels makes this challenging, but producers are interested in trying cover crops and changing microbial communities in soil.

The researchers believe information on soil biodiversity will show the importance of selected management options such as cover crops, reduced tillage and crop rotations in improving soil health and in sustaining crop productivity.

“We understand this is a farm and people need to maintain their yield,”

Dunfield says. “We’re looking for the most sustainable, environmentally ultimate good to achieve that.

“But, right now, there is no tool to measure biological indicators,” she adds. “No one knows what part of biology is important. We need a good way to measure biology in soil and determine what we need there to have healthy soil. We need the research and data to show if a farmer grows this cover crop, this is what it does to the soil.” 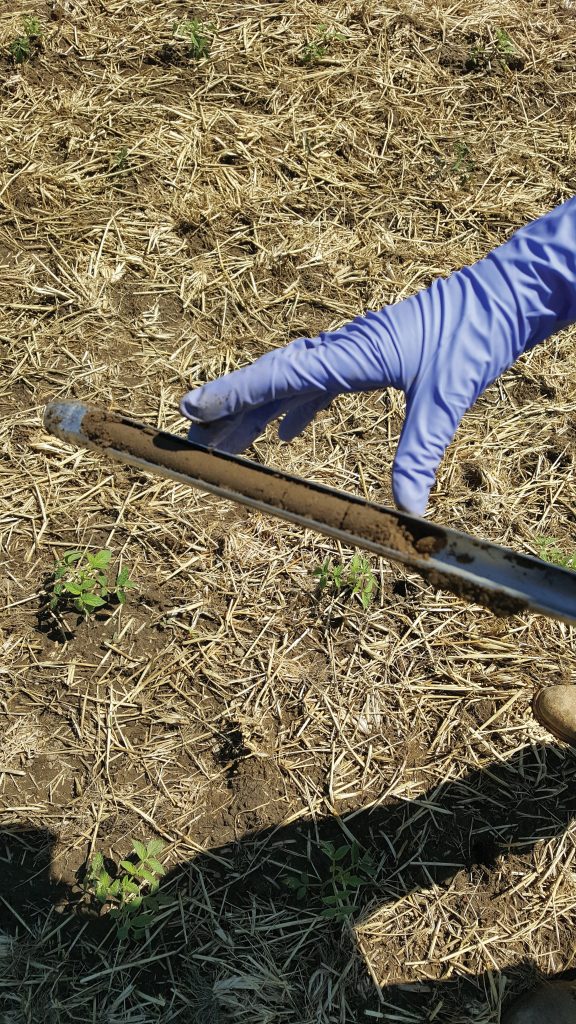 A soil sample from which researchers will look at the soil bacterial and fungal communities and quantify them as part of a study at the University of Guelph looking at the connection between soil biodiversity and soil health.