The wheat stem sawfly (WSS) Cephus cinctus Norton (Hymenoptera: Cephidae) is an economically destructive insect pest of wheat in the northern Great Plains. A significant resurgence in the southern Prairies of Canada caused substantial economic losses from 1999 through 2007. It continues to be a major economic pest in states adjoining the Canadian Prairies, and has become problematic in other wheat growing states, such as Colorado and Nebraska.

Solid stem wheat cultivar selection is critical to the integrated management of WSS, but adoption of these cultivars has so far been low, which compounds losses at harvest.

A study was conducted from 2001-2005 in southern Alberta and Saskatchewan to establish the range of susceptibility of hollow stem wheat varieties representing the major spring wheat classes, to characterize resistance levels in solid stem germplasm derived from traditional and novel genetic backgrounds, and to determine the impact of host plant on WSS population dynamics.

The solid stem varieties of wheat were generally superior at reducing damage and fitness response of WSS. However some varieties, such as McKenzie and the Canada Western Amber Durum cultivars AC Navigator and AC Avonlea, provided improved efficacy over the other hollow stem cultivars. The novel germplasm Golden Ball and the derivative G9608B1-L-12J11BF02 were the most consistent at reducing damage, fitness and fecundity of WSS across an array of environments.

The challenge will be to maintain this level of efficacy as the Canada Western Red Spring phenotype is reintroduced into the germplasm. Variability in fitness response suggests that stem type alone was only a partial solution to reduce female fecundity, and illustrates why multiple integrated strategies over the long term are needed to reduce populations to manageable levels.

In summary, solid stem cultivars are highly effective but prone to inconsistent performance, and should therefore be integrated into a holistic strategy for WSS that includes agronomics and biocontrol.

*Editor’s note: This article is based on the Canadian Journal of Plant Science Best Agronomy Article for 2014. The Journal articles are open source to the public and the complete articles can be downloaded at pubs.aic.ca/journal/cjps. 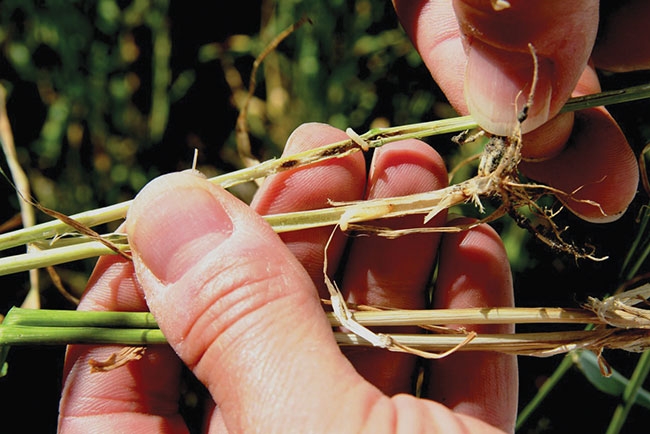