Researchers in the United States are looking at the relationship between plants and soil and how this relationship might be used for weed control. And they are solving the mystery like any good investigators would, using DNA fingerprinting.

Tony Yannarell, assistant professor of microbial ecology with the Department of Natural Resources and Environmental Sciences at the University of Illinois (U of I), and grad student, Yi Lou, extracted the microbial DNA from soil collected for 10 home and away trials using two agricultural weeds – the common sunflower, Helianthus annuus L., and giant ragweed, Ambrosia trifida L. This gave them a pool of DNA from all of the micro-organisms in the soil and allowed them to create fingerprints of each soil community.
The trials took place independently at agricultural research facilities in Michigan, Illinois, Kansas, South Dakota and Oregon using local soils gathered on site. Each trial used common seed stocks, with the sunflower seeds gathered in Manhattan, Kan. and the ragweed seeds gathered in Urbana, Ill.

“Soil from Michigan and Montana have different organisms so we would get a different fingerprint,” Yannarell says. “When soils have similar micro-organisms, then we get similar fingerprints.”
Yannarell became involved in the research after results from other trials examining plant-soil feedback loops ruled out nutrient depletion and soil chemistry as the causes of plant growth changes.

“Plant-soil feedback research has been going on for 15 years or so,” Yannarell says. “When you have a particular plant growing, as it grows it interacts with the soil and what’s in the soil, and it changes the makeup of soil.”

“Sunflower gives positive feedback in the west, negative in east. Maybe ragweed does the opposite?”
In the trials, the researchers grew ragweed and sunflower plants in home and away soil to see how they interacted with the soil. They grew two generations of the plants in the same pots to give them the opportunity to do what it would do to soil, and then looked at the average growth of each in the away soil versus the home soil. If it does better in the away soil, it’s a negative plant-soil feedback; if it does better in the home soil, it’s a positive plant-soil feedback.

They next looked to see if plants were making chemical toxins in the soil that might affect the plant, but found no evidence of this. “They started to think about micro-organisms and that’s where we got involved,” Yannarell notes, adding because the researchers froze the soil, they were able to study its microbial makeup.

When they didn’t see similar organisms in the home and away soils, they realized ragweed was doing a good job picking out the bad-for-it micro-organisms wherever it grew. The search was on to find out just which micro-organisms might be bad for it. They developed a math equation to determine how good or bad each micro-organism is for ragweed or sunflowers.

Scientists estimate a gram of soil contains over 10,000 species of bacteria. “If we drill down to the ones most responsible for soil health, on average less than seven per cent of the bacteria in soil could explain about 90 per cent of change in plant growth,” Yannarell says, adding while they can’t give a list of bacteria or fungi to use for weed control just yet, his department’s research does raise the possibility of identifying micro-organisms for weed control.

“We can find plants we desire and plants we don’t want,” he says. “We are now looking at the use of cover crops to set up a soil environment that is good for plants but bad for weeds.”

In Canada, Kari Dunfield, an associate professor and Canada research chair with Environmental Microbiology of Agro-Ecosystems at the University of Guelph’s School of Environmental Sciences, says they have been using similar molecular methods to examine pathogen communities associated with dog strangling vine, Vincetoxicum rossicum, a highly invasive plant in North America.

“Dog-strangling vine is on Ontario’s Noxious Weeds list, and is not only an environmental concern, but a big problem for farmers and gardeners,” Dunfield says. “My graduate student, Nicola Day, and collaborator Pedro Antunes at Algoma University, have been looking across 100 years of natural invasion of dog-strangling vine in Ontario, and using high throughput genetic sequencing to identify the fungal communities associated with field-grown plants.  We have been looking for fungal communities to attempt to identify communities that may build up over long periods of time.”

Along with genetic methods, Day has cultured fungal isolates from dog-strangling vine and is now testing them to see if they are pathogenic to this plant, and also to native plants, in order to get a better understanding of how dog-strangling vine becomes invasive.

Dunfield explains that plants are associated with a diverse microbial community both surrounding their roots, in the rhizosphere, and within the roots, the endosphere.

“Plants attract specific microbial groups through their pattern of root exudation,” she says. “By getting a better understanding of this relationship, it is possible we could either grow plants in rotation that attract beneficial microbial groups, or alternatively, attract weed specific pathogenic microbes.”

She adds the value in research such as that being done at the U of I is its focus on targeting soils’ DNA.

“Since less than one per cent of microbes are able to be grown in the lab, a critical component of this work is our ability to target DNA in the soil and identify microbial communities,” Dunfield says. “This metagenomics approach has allowed research groups to begin to move forward in these areas and ask these types of research questions.” 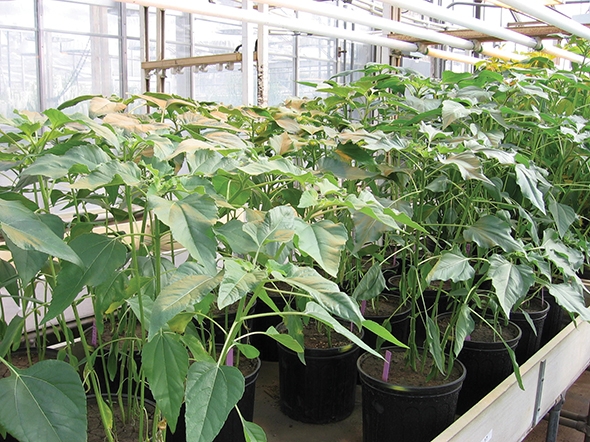 Researchers grow sunflower in a greenhouse to study how the plant and soil interact to affect plant growth. Researchers in the United States are looking at the relationship between plants and soil and how this relationship might be used for weed control.