For over a century, the wheat stem sawfly has plagued wheat crops in Canada’s southern prairies, causing serious yield and quality losses, especially in dry years. Assorted measures are available for managing the pest, but no single measure provides complete control. A new decision support strategy (DSS) brings together all those practices in an integrated approach to sawfly management – an approach that enhances wheat yields even when sawflies aren’t a problem.

Wheat stem sawfly adults are black wasp-like insects. In June and early July, the females lay their eggs in the stems of grassy plants, including most cereal crops – their favourites being spring and durum wheat. One female can lay up to 50 eggs, which will hatch about a week after deposition. Usually only one larva survives per plant as the first one to hatch consumes the others. During the growing season, the larva feeds within the stem, causing damage that hinders nutrient movement to the wheat head. Affected plants have fewer seeds and shrivelled seeds.

Then, as the plant ripens, the larva goes to the bottom of the stem and cuts a groove around the inside of the stem less than 2.5 centimetres above the soil surface. The weakened stem falls over easily, and the fallen plants are difficult to harvest, resulting in further yield losses. The larva overwinters at the bottom of the stem, and then develops into a pupa in May and emerges as an adult in June.

Wheat stem sawflies can reduce wheat yields by 30 percent or more. The worst damage is usually in the field margins. However, severe infestations can affect entire fields. Sawflies thrive in dry conditions and when an abundance of hosts are available. They tend to prefer spring-seeded wheats because winter wheat plants are usually too far advanced when female sawflies are looking for nice places to lay their eggs. No insecticides are registered for this pest, and insecticides are generally ineffective at controlling it. As well, insecticides kill the parasitoid wasps that prey on sawflies.

Development of the DSS was led by Dr. Brian Beres of Agriculture and Agri-Food Canada in Lethbridge. He began investigating wheat stem sawfly management in 1999-2000, when the pest was starting to resurge first in southern Alberta and then southern Saskatchewan. The resurgence was due to a combination of factors including a major drought, tight wheat rotations, limited use of sawfly-tolerant wheat varieties and unintended damage to parasitoid wasp populations.

Beres and his research team conducted a complex series of experiments to examine how agronomic practices affected sawfly populations and wheat yields.

“My goal was to target every link along the chain of production. We started with activities related to preseeding, such as residue management and variety selection, and studied how those, along with seeding systems, would interact with the wheat stem sawfly. Then we moved to components like seeding density and nitrogen management, and then into harvest management strategies,” he explains.

Beres adds, “Developing the decision support system for managing wheat stem sawfly also gave me the opportunity to review wheat production practices even in the absence of the sawfly and to update those for producers.”

The DSS, shown in the diagram, integrates all the important components that comprise a sustainable agronomic system for growing wheat. It is designed for spring-seeded wheats, although many of the practices also apply to winter wheat.

Sawfly risk assessment
Wheat stem sawfly damage levels in one year can be used to predict the risk of damage in the following year.

Provincial and federal agencies survey damage levels each year in Alberta and Saskatchewan, and then generate forecasts of the risk for the coming growing season. Growers can add that information to their own knowledge of previous on-farm damage levels as input for their cropping decisions. For instance, if the risk level is high, a grower might decide to choose a sawfly-tolerant wheat variety or a non-host crop, such as oats or a broad-leaved crop.

As well, in late July, growers need to assess the current level of infestation in their wheat fields to help with harvest management decisions. To scout for the sawfly, Beres suggests starting in the field margins. At several spots, select 10 stems, split the stems lengthwise and look for the larvae or damage from larvae. The larvae are cream-coloured and 10 to 25 millimetres long, and they excrete fuzzy, sawdust-like frass when boring the stem.

However, for winter wheat, it’s important to maintain standing stubble, so minimal harrowing and low-disturbance seeders are recommended; these produced the highest grain yield for winter wheat in the study.

Crop and variety choice
Sawfly-tolerant wheat varieties have solid stems filled with pith, rather than hollow stems. However, at present, the only available solid-stemmed varieties are in the bread wheat class. A durum line from AAFC’s Semiarid Prairie Agricultural Research Centre was recommended for registration February 2012 at the Prairie Recommending Committee for Wheat, Rye and Triticale.

If the sawfly risk is low to moderate and a solid-stemmed option isn’t available, then the grower could plant a hollow-stemmed variety with a trap crop of a non-host crop around the field edges. However, if the risk is high, a trap crop may not help because the infestation will likely go beyond the field margins.

If the sawfly risk is moderate to high, crop options include: a blend of solid- and hollow-stemmed wheats; a solid-stemmed bread wheat; or a non-host crop.

Reducing the frequency of wheat in the rotation reduces the number of sawfly hosts, which reduces sawfly populations. More diverse rotations also have many other crop production benefits.

Seeding rates in the DSS depend on whether the wheat is hollow- or solid-stemmed. For hollow-stemmed varieties, Beres advises using seeding rates between 350 and 450 seeds per square metre. The higher plant densities result in lower whole-plant moisture, which is less attractive to egg-laying sawflies. Furthermore, his research shows higher plant densities improve the yield potential for the hollow-stemmed varieties, even in the absence of sawflies.

Nutrient applications should follow the recommended rates for a healthy crop.

Harvesting
Decisions on harvest management options are based on the grower’s earlier assessment of sawfly infestation levels. An important option for infested areas is early swathing to gather the stems together in windrows before they fall over and become unharvestable.

Beres says, “If only the field margin seems to be infested, then you could either swath the margin early or just be prepared that the margin might go down. If the entire field looks like it’s infested, then I would monitor that field a little more closely and harvest it as early as possible. If I have the option of swathing ahead of time, I might do that.

And if I didn’t have a pickup reel with nice pickup fingers, I would probably be investing in that because it doesn’t take much of a wind storm timed right with the maturity of that crop to have a field standing nicely one day and 40 to 50 percent lodged the next.”

Setting the cutting bar height to higher than 15 centimetres is another practice that’s a good idea, whether or not the sawfly risk is high. “There are a lot of good reasons for cutting high, including residue management, minimizing soil erosion and greatly reducing evapotranspiration. And one specific advantage in relation to sawfly management is much greater conservation of the populations of its natural enemies,” explains Beres.

Next steps for the DSS
Beres’ next goal for the decision support strategy is to convert it into an online model so growers could input their own information, step by step, to get recommendations for their own situation.

He also sees other possible applications for this DSS approach. “This was a really neat area of research to work on because many of the components in this system could transfer over to any crop production system,” says Beres.

“Using the same principles we used in this model for sawfly management, the model could be adjusted for managing a different insect pest, disease or weed. I think the big take-home message is the importance of integration of all the key steps that make up a solid agronomic system.” 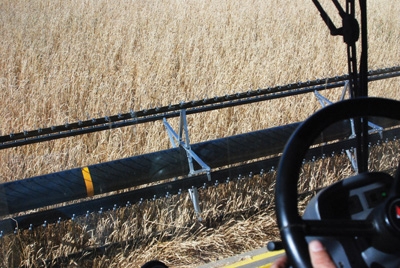 Harvestability is a key issue with wheat stem sawfly damage. For over a century