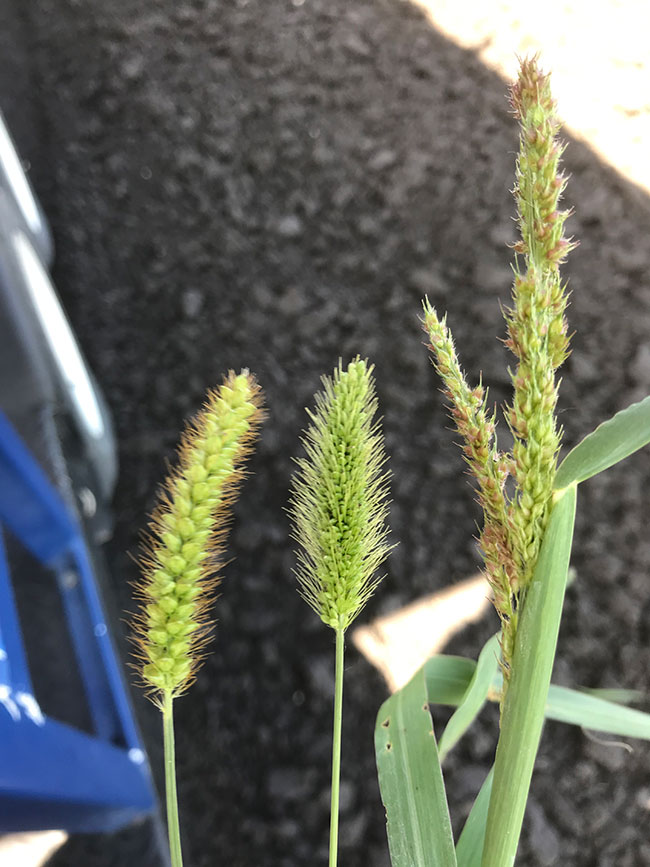 Yellow foxtail is the underdog of Manitoba weeds. In the province’s 2002 provincial weed survey, yellow foxtail ranked 30th in relative abundance. By the last survey in 2016, it had jumped to sixth place, after green foxtail, wild buckwheat, barnyard grass, wild oat and canola.

More troublingly, the weed is developing herbicide resistance, according to Agriculture and Agri-Food Canada weed monitoring biologist Julia Leeson, who led the survey.

“Yellow foxtail populations were found that were resistant to Group 1, Group 2 and Group 1 and 2 herbicides – 42 per cent of fields sampled with yellow foxtail had a herbicide-resistant population,” she says.

Tammy Jones, a weed specialist for Manitoba Agriculture and Resource Development, says it isn’t clear why yellow foxtail has jumped to sixth place so quickly, although part of the reason might be the fact that it’s a heat-loving plant, and an increase in row crops such as corn and soy give yellow foxtail more of an edge.

Yellow foxtail also appears to like moisture more than green foxtail, says Rob Gulden, a weed scientist at the University of Manitoba, although scientists still don’t know much else about what distinguishes it from its cousin.

Like green foxtail, yellow foxtail is an annual weed that reproduces by seed, with smooth leaf blades and sheaths and a branching habit.

“It has larger seeds than green foxtail, and the seeds have a high level of dormancy at seed shed. We don’t know its exact longevity in the seed bank, but the foxtails can stick around for a fair bit – up to 10 years, or for an average of about five to six years, where most grasses last about three to six years in the seed bank,” Gulden says.

Early on, yellow foxtail is very difficult to distinguish from green foxtail or barnyard grass. The best way to distinguish the weeds is by looking at the ligule where the leaf attaches to the stem: after the three to four-leaf stage, both yellow and green foxtail develop a fringe of hairs. However, yellow foxtail also develops several additional long irregular hairs on the leaf near to the ligule.

Barnyard grass has flatter stems and redness near the root – but the differences are so subtle that even Jones has confused the two more than once. 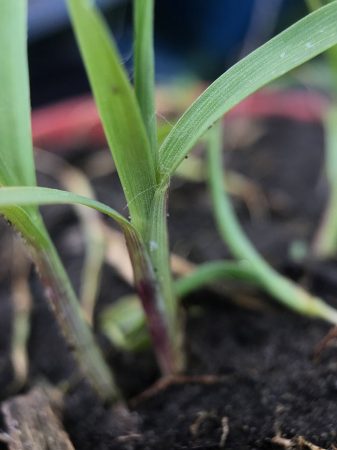 Yellow foxtail is an up-and-comer in the Prairie weed world.
Photo courtesy of Tammy Jones.

Scouting and spraying
Gulden says it’s key to scout before spraying, and to avoid repeating applications of the same mode of action within a season at minimum, and ideally over multiple seasons.

“We don’t want to hit the same weed with the same mode of action twice. Whatever susceptibles weren’t killed the first time, by the second application only the resistant plants reproduce,” he says, adding that scouting after application to confirm efficacy and look for possibly herbicide-resistant survivors is a good strategy.

“If there are herbicide failures, talk to Tammy or myself, because we need to know what’s going on,” Gulden says. “Sometimes there are failures because it’s too dry and weeds shut down and put on a thick cuticle. That might not be related to resistance, but people need to keep an eye on it.”

Jones says that, because there hasn’t been a new herbicide mode of action in 30 years, the industry needs to safeguard the efficacy of herbicides already on the market by adopting integrated herbicide resistance management strategies.

This includes harvest weed seed management, tillage when necessary and crop rotation, mixing “C3 plants” (like wheat, canola and soybean) and “C4 plants” (like corn, but also weeds like kochia, green foxtail and barnyard grass) to discourage the development of resistance.

This type of multilayered approach is intricate and complex, Jones says, but many producers are motivated to make it work.

In theory, she adds, yellow foxtail should be fairly manageable, but it’s shown a surprising resilience.

“If you look at green foxtail, it is our number one weed, but we tend to ignore it. I think yellow foxtail is just a bit more competitive,” she says. “If producers are having a problem with it and can’t seem to get it under control, they should call us and we can try to come up with a solution.”

No Comments » for Yellow foxtail a weed to watch

1 Pings/Trackbacks for "Yellow foxtail a weed to watch"