March 10, 2020
By Sponsored by Corteva Agriscience

Every farmer wants to ensure their crop gets off to a good start. But when a field is infested with voracious insects that devour seedlings, that can be a major challenge.

“I think it’s incredibly important to provide protection against those early season pests,” says Sarah Anderson, senior agronomist with crop input dealer G-Mac’s AgTeam. “We see some devastating effects by some of these pests, even at relatively low populations, due to their concentrated feeding.” 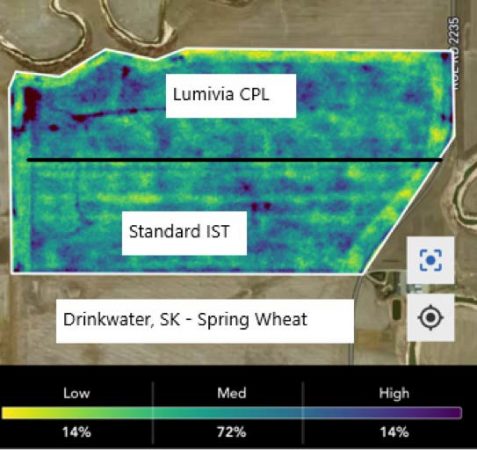 Allan Mayer, market development specialist, seed applied technologies at Corteva Agriscience, points out that when infestations are high enough, cutworms and wireworms can cause enough damage that some field areas or even entire fields have to be reseeded.

“If you have to reseed some parts of the field, then you’ll have a crop at two different stages and that makes harvesting complicated,” he says.

“Farmers know when the ideal time to seed is based on weather conditions, so getting the crop in during that planting window is important for the highest yield possibility or opportunity on that field,” Mayer adds. “If you have to come back later, you just never seem to get those same results that you would have with a successful first run.”

Anderson notes that even when crops are able to withstand an early season attack by cutworms or wireworms, it’s very difficult for them to catch up.

“Really, any stresses that come on in the early season really set the stage for the rest of the crop year,” she says “If there’s been some damage to the crop as a result of insect feeding but it hasn’t been wiped out, then it will start to regrow. It takes energy to regrow though, and that’s going to put the crop behind.”

“Having the insecticide there with the seed that’s going to be targeting all of these insects will provide piece of mind for growers,” Anderson says.

Mayer likens insecticidal seed treatment to an insurance policy that gives farmers their best chance of growing a good, strong and healthy crop.

“The crop is the most at risk in those early development stages, so as the crop is germinating and coming out of the ground, that’s the critical time to protect it against insects like these,” he says.

“By controlling those insects with insecticidal seed treatment, you ensure an even, consistent crop establishment, and that results in higher yields, a healthier crop and easier harvesting . . . and an overall higher-returning crop.”

Mayer believes this kind of insurance can be particularly beneficial for growers who have run into problems with cutworms, wireworms, pea leaf weevils or armyworms in their crops in the past, or who’ve had neighbours with similar difficulties.

“In those instances, it would be a very good idea to give your crop that extra boost and provide that additional surety that you’ll be able to handle those pests if they arise,” he says.

The primary weapon against early season pests are neonicotinoid insecticides, or neonics. They provide excellent control when used as seed treatments, but due to concerns over pollinator health, neonics have come under increasing scrutiny in recent years.

Anderson says expanding seed treatment choices for growers not only reduces dependence on neonicotinoid insecticides, but also provides more options for rotating chemistries, which is a crucial aspect of resistance management.

“We want to make sure that we can preserve those [neonicotinoid] tools going forward, and I think it’s always great to have diversity in insecticide options,” she says. 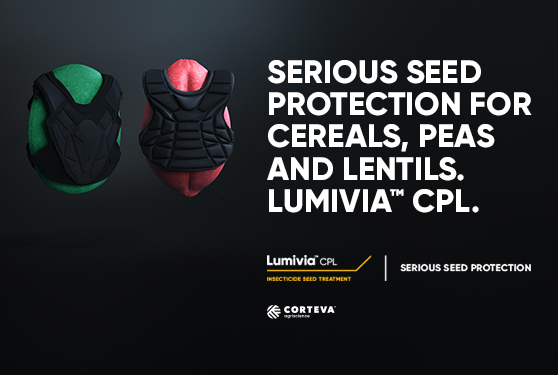 Anderson notes there is a seed treatment alternative that’s proving to be as effective as neonics: Lumivia CPL, a new product from Corteva Agriscience that targets cutworms, wireworms, pea leaf weevils and armyworms. It was registered for commercial use in Canada for cereal, pea and lentil crops in 2019 and will be available to growers this year.

Lumivia CPL is in a different class of chemistry and also features a different mode of action than other seed treatments on the market. Mayer says neonicotinoid insecticides stop pests from feeding by putting them in a dazed state, but they don’t actually kill them. Lumivia CPL targets specific muscle groups in the insect, causing paralysis and a reduction in the pest population in the soil.

“This is a unique product,” he says. “When treated on the seed, this insecticide is going to reduce populations of these pests in the soil. It’s also very safe to use for the farmers who are applying it on their seed and for non-target, beneficial insects in the field as well.”

Mayer notes Lumivia CPL was introduced to the Canadian ag industry through a large demonstration program last year, which was hosted by growers and agri-retailers in 20 different locations across Western Canada.

As part of that program, participating growers were asked to utilize yield monitors on their combines to see how Lumivia CPL stacked up against other insecticidal seed treatments.

“The results were very positive,” Mayer says. “Pretty consistently, the farmers said the Lumivia CPL site yielded at least as well and oftentimes better than the competitive treatments. They also said that the crop was even, healthy and thicker.”