With increases in canola production demands and the needs of emerging markets, canola crops are often included more frequently in rotation.

However, as producers shorten rotations and reduce cropping system diversity to grow canola more often, the sustainability of the cropping system is likely to be reduced and pest management impacts are expected to amplify.

Researchers at the University of Saskatchewan (U of S) in collaboration with Agriculture and Agri-Food Canada (AAFC) in Saskatoon led a three-year project to assess the potential effects of increasing the frequency of canola in the rotation, and to explore the ecological impact of canola-inclusive cropping systems in Western Canada. The main objective of the research was to study weed abundance, species distribution, community diversity and function in canola-inclusive rotations across Western Canada and their relationships with management practices.

“Our research included a combination of existing weed survey data, crop management practices and weed species abundance from across Western Canada, as far back as the mid 1970s,” Christian Willenborg, assistant professor in the department of plant sciences at the (U of S), says. “In 2012, we also conducted a field survey in Saskatchewan to assess weed species diversity and composition. In another part of the project, we collaborated with Dr. Neil Harker at AAFC Lacombe on his long-term canola rotation field studies comparing continuous canola, and canola every two, three or four years, and assessed weed abundance and species distribution.”

The results showed specific weed species are associated with increased frequency of canola in the crop rotation. “More specifically, species such as wild buckwheat, annual sow thistle, cleavers and foxtail barley were associated with canola production,” Willenborg explains. “Some of this is due to the frequency of canola in rotation and the herbicide tolerant systems used, but most of the variation was due to environment. Cleavers probably changed the most, moving up from number 31 in the 1970s on the list of most common species to number six or higher now. Volunteer canola also moved up from a low 30s ranking to the number 14 most common weed or higher in canola today.”

From the field survey conducted in 2012, results showed wild buckwheat (75 per cent of fields) was the most frequently observed species, followed by green foxtail and wild oat (almost 50 per cent of fields). Dandelion, shepherd’s-purse, Canada thistle, lamb’s quarters, spiny annual sow thistle and volunteer wheat were found in 40 to 45 per cent of fields. (See Table 1.)

“Along with the direct changes of weed species in the position on the list, we also assessed whether there were specific weeds associated with continuous canola or canola grown every second year in rotation,” Willenborg notes. “The results showed back-to-back canola rotations were characterized by low densities of volunteer wheat and wild oat, but with very high densities of chickweed. This is not surprising as wheat is not present in a continuous canola rotation. Low densities of wild oat reflect the fact wild oat is controlled well in canola crops and so densities are low, whereas densities would be expected to be higher where other crops are included in rotation. However, chickweed is well adapted to canola because it is a low growing, shade tolerant species and tends to do well under a canopy. There are also increases in Group 2 resistant chickweed, which is probably picked up in the higher numbers in the weed surveys.”

Willenborg adds another weed strongly associated with Roundup Ready canola systems, which may come as a surprise, was green foxtail. Researchers expect because green foxtail is a late emerging C4 species and growers typically apply glyphosate early at the cotyledon or first-leaf stage, green foxtail likely hasn’t emerged at the time of application and is being missed. In longer one-in-three or one-in-four year rotations, wild oat tended to be the top most frequent weed, typically associated with the glufosinate- and imidazolinone-resistant systems. Growers often tank-mix a Group 1 herbicide with glufosinate to get increased control of wild oat in canola.

“Overall, growers are achieving very good weed control in canola because the herbicides designed for use in herbicide-resistant canola systems are very efficacious and, in most cases, provide greater than 95 per cent control, and in some cases upwards to 99 per cent control of major weed species,” Willenborg says. “However, the major weed issue associated with continuous canola cultivation is volunteer canola. The results, which included post-herbicide weed counts, show that sufficient control of volunteer canola is not being achieved in continuous and short canola rotations. Volunteer canola creates various production risks for growers such as crop competition, pest and disease issues, and potential harvest quality losses.”

Overall, the results showed that other than volunteer canola, relatively few weed species were associated with continuous canola cultivation. The results clearly demonstrate herbicides play a major role in shaping the weed community. Taken together, the results indicate although the majority of weed species community composition can be explained by site and environment, the effects of herbicide application and rotational diversity were significant nonetheless.

“Although few weeds are desirable from a crop production standpoint, the risk of developing herbicide resistant weeds under continuous canola production is high and extreme caution must be used when incorporating a risky practice such as continuous canola into a cropping system,” Willenborg emphasizes. “Growers should use good rotations of both crops and herbicides not just for weed management overall, but also for control of volunteer canola and disease concerns.” 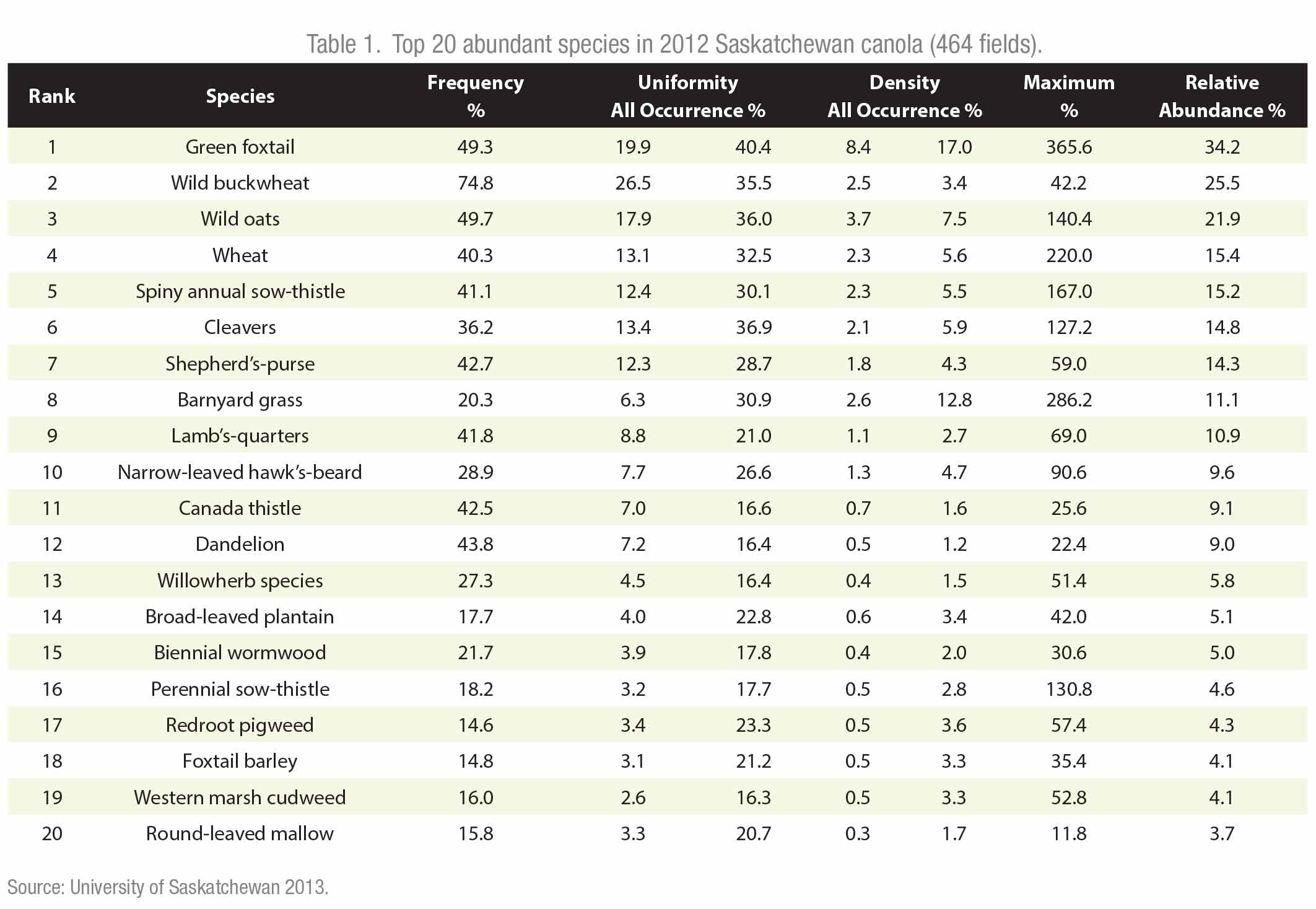