In the short term, farmers have moved to a canola-wheat rotation as the most popular rotation on the Prairies. Driven by economics, this rotation has proven profitable – but at what cost?

Researchers at Agriculture and Agri-Food Canada (AAFC) conducted research from 2008 to 2013 to determine the effect of canola rotation frequency on canola seed yield, quality and pest impacts. The results were published in the Canadian Journal of Plant Science.

The objective of the study was to determine the effect of canola rotation frequency on canola pests (weeds, blackleg disease and root maggots), seed yield and quality in a six-year, all phases, rotation study at five sites in Western Canada. From 2008 to 2013, continuous canola and all rotation phases of wheat and canola or field pea, barley and canola were conducted at five Western Canada locations. LibertyLink and Roundup Ready canola were grown. Fertilizers, herbicides, and insecticides were applied as required. (See Table 1.)

The five sites were at Lacombe and Lethbridge, Alta., and Melfort, Scott and Swift Current, Sask. The crops were direct-seeded on no-till plots. Most fertilizer was side-banded 0.75 to 1.5 inches beside and 1.2 to 1.6 inches below the seed row with small amounts of nitrogen and phosphorus also placed with crop seeds. Seeding was performed with air seeders equipped with knife openers, and crops were seeded at optimal depths in nine to 11.8 inch rows.

Longer rotations = 3.5 to 6.4 bu/ac higher yield
In the research, AAFC research scientist Neil Harker did not observe any significant rotation frequency by canola cultivar interaction, so all yield data was averaged across variety, and herbicide type. Yields were also averaged across location. An average of 3.5 to 6.4 bu/ac (200-360 kg/ha) increase was seen for each year that a wheat, barley or pea crop was added to the rotation.

“Canola yields were always improved by adding wheat or field pea followed by barley to the rotation,” cited Harker in the journal article. “These results are consistent with many other studies suggesting canola yield improvements with increased rotational diversity.”

Looking at the more diverse rotation of lentil-wheat-canola-pea-barley-canola, the researchers did not find a yield advantage compared to a field pea-barley-canola rotation. Seed oil or protein concentration and oil quality were not impacted by rotation frequency (see Fig. 1).

Blackleg severity and incidence were both strongly influenced by canola rotation frequency with blackleg severity and incidence increasing as canola rotations tightened. Despite using canola rated as resistant in the study, blackleg disease was worse with short rotations. The authors believe it may reflect a breakdown in cultivar resistance or at least a gradual erosion of resistance over time. This is supported by other research that found changes in blackleg virulence with high disease severity in some cases, usually associated with shorter rotations.

The study also looked at the impact environmental factors had on canola yield. High canola yield was associated with cooler temperatures and adequate, but uniform, precipitation over the growing season.

In concluding, the authors state: “In spite of reduced yields, rotations with high canola frequency may still be more profitable in the short-term, but long-term pest (disease, insect and weed) management issues could be problematic, if not dire. Growers should balance high immediate-income, low-diversity cropping systems with lower immediate-income, higher diversity systems to ensure long-term sustainable canola production.” 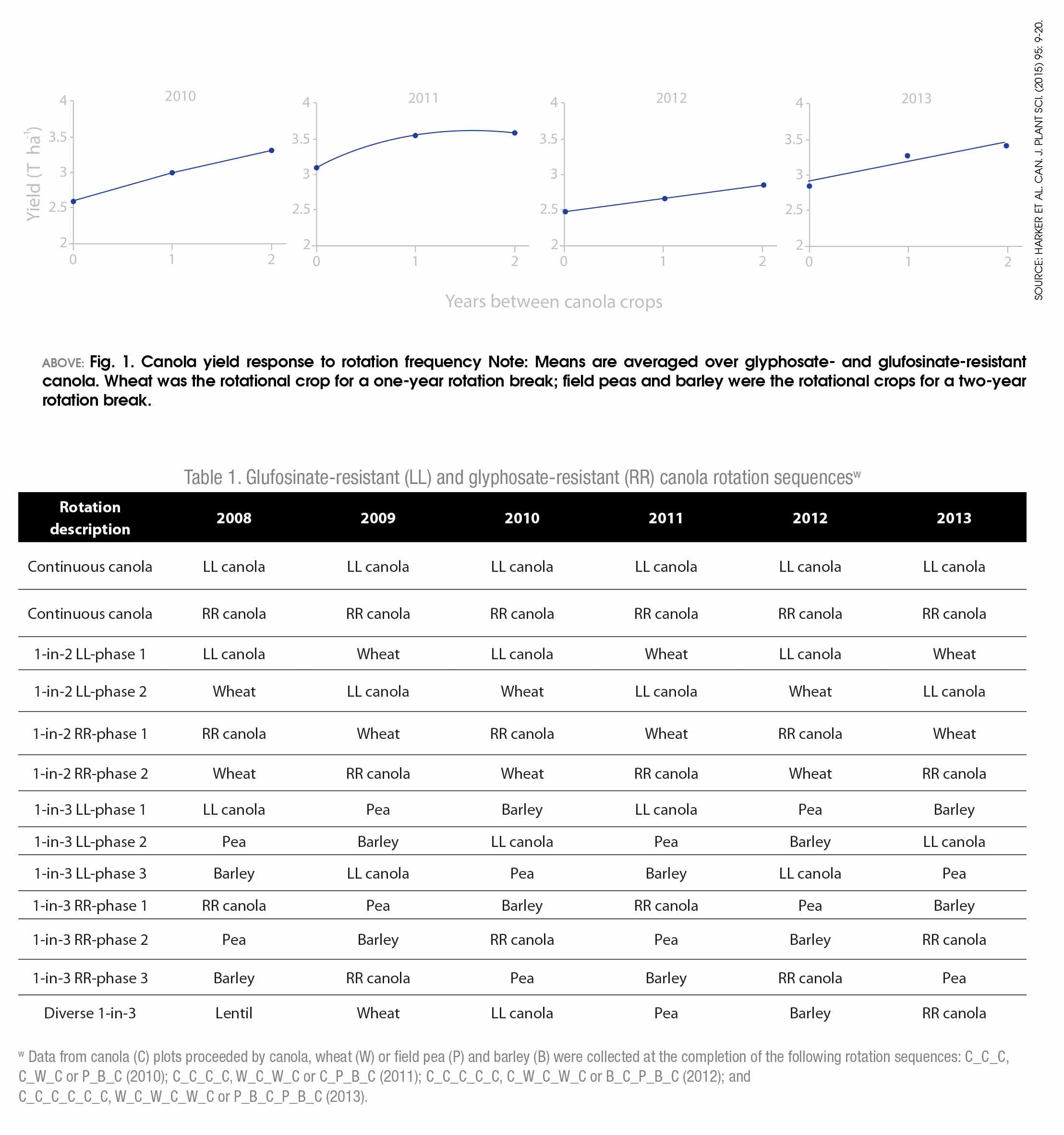