Over the past few years, shorter-duration canola rotations have become more common than the recommended once every four years. Researchers at Agriculture and Agri-Food Canada (AAFC) conducted a long-term field study of canola and pea interval in rotations to determine the most profitable canola production systems. Producers could be reducing their long-term profitability if the short-duration canola rotation results in increased disease and lower yield.

“As part of this long-term rotation study looking at the impact of intensifying rotations, we compared the economics and profitability of the various rotations,” explains Elwin Smith, bioeconomist with AAFC in Lethbridge, Alta. “The returns above variable costs for the production systems were determined over the last four years of the study when rotation impacts were expected to be most evident.”

The long-term rotation study was conducted over 16 site years at Scott and Melfort, Sask., starting in 1998 at Scott and 1999 in Melfort. The study compared a blackleg-resistant canola hybrid and a blackleg-susceptible cultivar grown continuously or every two, three or four years in rotation with pea, wheat and flax. Researchers were also looking at the impact of shorter rotations on diseases such as blackleg and sclerotinia stem rot, with and without fungicide treatments.

“The study showed that the frequency of canola in crop rotations impacted returns,” says Smith. “During the time period of the study with the high prices for canola, the short-duration rotation was more profitable than the longer rotations. The two-year canola-wheat rotation or the three-year wheat-pea-canola rotation was more profitable than the four-year rotations or continuous canola. This was partly due to the profitability of canola compared to other crops, and over the time period of the study there was very little yield depression from diseases.”

The profitability of canola relative to wheat depended on the relative price of the two crops. A four-year average (2007/2008 to 2010/2011) of farm-gate crop prices was used for the study and per tonne were $455 for canola, $241 for wheat, $234 for pea and $494 for flax. A sensitivity analysis of crop price was used to determine how canola price changes impacted the relative profitability of canola and of canola in various rotations. A price ratio of 1.9 times was used in the main analyses and the price of canola was altered to be 1.7 times ($410/tonne), 2.1 times ($506/tonne) and 2.3 times ($554/tonne) that of wheat.

“The price of canola relative to wheat impacted the relative profitability of canola rotations with hybrid canola,” explains Smith (see Fig. 1). “On average, the two-year canola-wheat rotation had the higher returns and better yields, while the continuous canola had the lowest yields.” At both Melfort and Scott with the low price ratio (C:W 1.7), the rotation return from canola-wheat was the same as for the four-year rotations, but greater than continuous canola. The continuous canola and pea rotations were the least profitable. As the price ratio increased, the returns increased. The higher canola price relative to other crops in rotation, as was experienced for most of 2009 through 2012, would be an incentive for producers to grow canola more frequently, even though yield could be depressed by disease. Therefore, there was a strong economic incentive for producers to use a two-year canola rotation.

Disease increase did not impact yield
Over the time of the study, disease impacts on yield from greater blackleg incidence and severity resulting from a short canola rotation did not cause enough yield reduction to have producers lengthen their rotation. However, the study showed that the disease incidence and severity increased for rotations shorter than canola once in four years, with the number of infested plants more than double in the two-year rotation and more than triple in continuous canola compared with the four-year rotation. Therefore, over the longer term, even with resistant cultivars, the higher the frequency of canola in rotation the greater the increase in the pathogen population and the higher the risk of resistance breakdown of current canola cultivars. The potential loss of genetic resistance to blackleg, due to changes in the pathogen population would result in greater yield reduction, which would require canola growers to lengthen the canola rotation to reduce the impact of new virulent races of blackleg.

In this study, the use of fungicides to control disease was not profitable for canola production because there was little impact of sclerotinia stem rot or blackleg. Fungicides did show a beneficial effect for pea production, but not for the other crops. Smith adds that with the trend to shortening canola rotations, fungicide application to control blackleg in short-duration canola rotations should be further investigated to determine the economic benefit.

Maximizing profitability includes other best practices such as adequate fertility. “Canola is a crop that requires a good nutrient package, and high amounts of nutrients such as nitrogen and phosphorus are removed at harvest,” says Smith. “Results from some of our other research shows that fertility is another factor that can have an impact on profitability.”

Weed management including early weed control is also important, especially for crops like canola that are not very competitive early in the season. Selecting the right hybrid variety that fits best in a particular area and cropping system is also important.

“Overall, growers need to determine the profitability of their cropping systems, assess the risks of diseases and other pests, and decide what works best for them,” says Smith. “They need to look at their yields, margins and net price for canola compared to the net price of wheat or other crops. In some areas, where transportation costs are higher, then shorter canola rotations may be more profitable. However in some areas such as the Brown Soil zone where canola may not be much more productive than wheat, then longer rotations with alternative crops may be more appropriate for their operation.”

From this study, on average the shorter-duration rotations became more profitable when canola prices were high relative to wheat prices, providing a strong economic incentive for producers to use a two-year canola rotation. If there is a time when other crops are more profitable than canola, then producers will have the opportunity to lengthen their rotation, which will help to alleviate disease concerns. 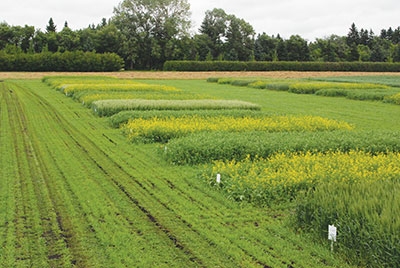 Canola-wheat was the most profitable rotation when canola prices were high relative to other crops. Over the past few years