Variable rate irrigation is a challenging new topic for both producers and researchers, so we’re excited to be working on it and seeing what we can learn and share with producers,” says Alison Nelson, an agronomist with Agriculture and Agri-Food Canada (AAFC) in Manitoba. She is leading a three-year project, which began in 2015, to look into some of the key questions around variable rate irrigation (VRI) in potato production. 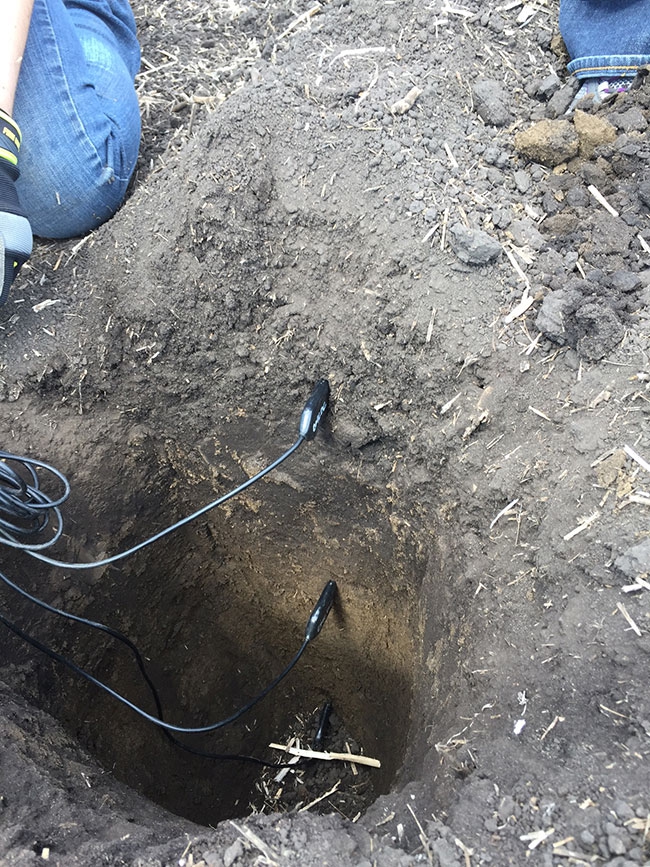 A couple of factors prompted Nelson to initiate investigations into VRI, starting in 2014. “Some potato producers in Manitoba were starting to look at this technology and starting to work with it on their own farms. And then at one of our own sites, we had the opportunity to upgrade our irrigation system for variable rate irrigation, so it opened up the opportunity to do some research into precision management of water.”

Applying variable irrigation rates that match up with a crop’s varying water needs across a field could produce important benefits. “In terms of managing a variable field with water, VRI has the potential to even out the quality and yield of potatoes across the field, which can really have some economic benefits for producers,” Nelson says. VRI could also potentially improve efficiencies of inputs of water and energy, and decrease problems associated with overwatering.

Her project has two main components. One part involves comparing different technologies and techniques for mapping variability across a 50-acre field at AAFC’s research site near Carberry, Man. “We’re using methods that producers would be looking at, such as topography and proximal sensor mapping using equipment like a Veris or an EM38 sensor to map soil variability. And we’re using technologies like a radiometer to map surface soil moisture variability. We want to see what types of maps these technologies create and whether these maps are valuable in terms of managing a field for moisture variability,” she says.

“The other part of the project is looking at how VRI is being managed in potato fields right now, and doing a side-by-side comparison of small plots managed with a variable rate system and with an even rate, across the entire growing season. We have small plots in our research field and in a producer’s field. We’re going to look at tuber yield and quality across some areas of variability in those side-by-side comparisons.”

Activities in 2014 and 2015 laid the foundation for this project’s final years. For example, the research site’s lateral irrigation system was retrofitted with a VRI system that provides the precise single-nozzle control needed for accurate VRI applications on the small research plots. Also, the project team researched different mapping technologies, mapped the AAFC research field with various technologies, conducted soil sampling on a 30-metre grid, obtained drone imagery of the field at different times in the growing season, and determined where to set up the small plots for the side-by-side comparisons.

Nelson explains each of the mapping technologies being evaluated in the project has its advantages and disadvantages. “Topography can be closely linked to soil differences especially where you have large topography differences. So it’s a relatively logical and simple way to map a field. It tends to be a good mapping option to start with. But topography doesn’t tell the whole story, so there are challenges with that,” she says.

“The Veris or an EM38 meter gives you a measure of soil variability that can be very instructive. The issue with those sensors is that a number of different soil factors – like salinity, moisture and texture – can all affect the sensor readings. So you have to combine the data from those types of sensors with measured soil values to understand what those maps are telling you about the soil variability in the field.

“The radiometer gives a relatively direct measure of how surface soil moisture varies over a field. However one of the issues with the radiometer is that it is only measuring the top few inches of soil. It is not telling us anything about moisture in the root zone, which can be a totally different story. So we have to work on those types of sensors in terms of how we are going to take the surface soil moisture data and understand what is happening below that into the plant root zone.”

The Veris and EM38 sensors measure variations in electrical conductivity of the soil across a field and also map the topography. A user drives the sensor over the field, covering the field in a series of parallel passes while the sensor continuously maps the in-field variation.

The AAFC field was mapped with the Veris and EM38 sensors in the fall of 2015. “That was a single mapping operation done after crop harvest, ensuring that the area being mapped had been evenly managed for the entire growing season,” Nelson explains.

The radiometer is mounted on a drone, which is flown over the project fields at three times during each growing season: early canopy, mid-season and full canopy cover. The idea is to evaluate the possibility of creating detailed soil moisture maps in-season. According to Nelson, if this imagery provides useful soil moisture maps during the growing season, “it could be a very interesting and intriguing new technology for VRI use.”

Nelson adds she is also exploring the possibility of in-season moisture monitoring using an EM38 meter. “As part of a complementary research project [with funding from a different source], we are running an EM38 sensor over differentially irrigated plots to see if this technology can be used to identify and map soil moisture differences over time. This data is scheduled to be collected at two-week intervals during the time of active potato crop growth.”

The sensor maps are used to create prescription maps that identify management zones for different VRI rates, which is harder than it sounds.

“We don’t have years of results yet, but what I’m seeing so far is that…we just can’t blindly use the sensor data to create a prescription,” Nelson says. “It’s a matter of trying to determine what are the major factors that you’ve found historically are affecting your moisture variability in the field, and boiling that information down to what is logical in terms of what you have seen in the past.”

In 2016, the project’s paired plot comparison of VRI versus uniform rate irrigation is underway at the AAFC research field and the co-operating producer’s field. Data on potato yield and quality will be compared for the different irrigation management zones.

The producer has a prescription map for his field that he developed with his agronomist. He is managing most of his field as he would normally with variable irrigation rates based on his prescription, plus he has paired plots within the field where one plot in each pair receives a uniform rate of irrigation.

Nelson hopes the project will provide practical information for growers on tools and techniques for mapping in-field variability and for creating prescription VRI maps and adapting them over the course of the growing season.

“There are always struggles with new technology, but the real challenge is how to create the prescription and then how to manage it in-season. Water is very dynamic, so you have your prescription map, but how you manage that over the season can change depending on how the crop is growing and factors like diseases that come in. And then rainfall and humidity can also affect how the prescription map may need to change over the growing season,” Nelson explains.

She adds, “With a prescription map for nutrients, you make a map and you apply fertilizer and then you move on to your next thing. With VRI you’ve got a map, but every time you go to apply water you’ve got to look at that map and figure out if it still makes sense to be watering this area with this much water and that area with that much water.”

Nelson’s project is part of a large initiative supported by the AAFC AgriInnovation Program and potato industry groups in Canada, including agencies in Manitoba’s potato industry such as McCain Foods, J.R. Simplot Company and the Keystone Potato Producers Association.