Understanding variability in soils and formulating a VR fertilizer plan. 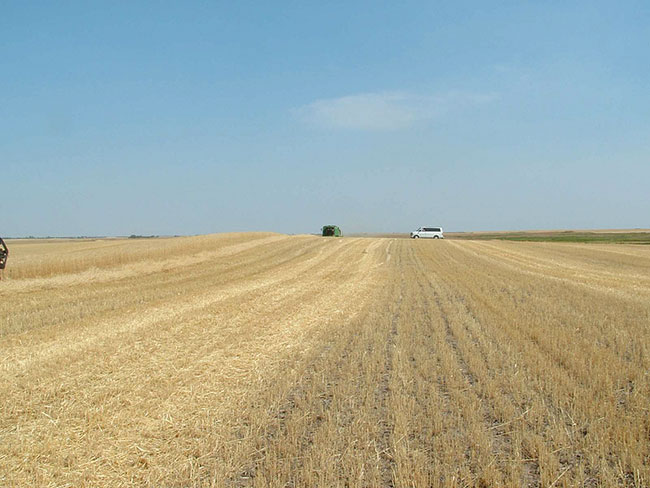 Variable rate applications and precision agriculture tools keep advancing, as more growers across Western Canada look for opportunities to improve yields and optimize inputs. However, the continued challenge across most systems is really understanding the variability and being able to translate that into management plans and VR prescriptions.

“To understand variability, it’s important to think about the sources of variability that exist on different scales, from regional soil variability across several kilometers to macro and micro scale variability on farms and within individual fields,” explains Jeff Schoenau, professor of soil science at the University of Saskatchewan and Saskatchewan Ministry of Agriculture chair.

“At the macro scale, variability can occur over several metres in a field, often strongly related to topography and landscape position within individual field. Soils can also vary at a micro scale over a few centimeters, which can influence how to best sample a field to account for that variability. The goal is to convert what appears to be random variability into something more systematic that we can manage.”

There are several different approaches and a range of tools that can be used to divide a field into separate areas to be managed differently. These may include soil type and property maps, combine yield maps, protein maps, satellite and aerial imagery such as NDVI, LIDAR and other technology.

Uneven wheat growth across field, reflecting variability in depth to hardpan B horizon in soil profile. 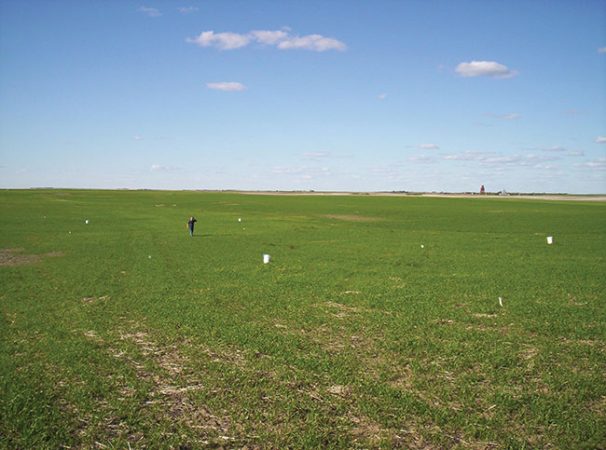 In Saskatchewan, soil type maps have recently been digitized and are available through the Saskatchewan Soil Information System (SKSIS). On the ground, soil testing and plant tissue analysis can inform about nutrient availability and soil properties across the various areas. Other measures such as soil electrical conductivity (EC) can be another way of dividing the field into zones.

“Topography maps can also be used to assess variability across a field to help identify the impact that landscape has on important plant growth influencing factors such as soil organic matter content, water holding capacities and accumulation patterns within a field,” Schoenau says. “However, it’s important to also look beyond just the difference in elevation, and consider the impact of soil surface curvature, which controls where water runs off and where it accumulates in the landscape. In areas where the surface curvature is concave, then water will accumulate, however convex areas are where runoff can occur, and are typically drier and of lower productivity, impacting management strategies on those areas.”

“It’s important to also look beyond just the difference in elevation, and consider the impact of soil surface curvature, which controls where water runs off and where it accumulates in the landscape.”

A major challenge is in the next step of developing the variable rate prescription for the different management areas and the equipment in the system. This requires an understanding of all of the different factors that control productivity and the response to an imposed management practice, such as fertilization or different seeding rates, or even different rates of water in an irrigated field. There are many ways to identify differences in productivity that exist across a field area. For example, using yield maps or long-term satellite imagery combined with information on soil parameters or soil types that reveal patterns in fertility, moisture holding capacity, salt content, and so on.

Identifying and creating meaningful management units or zones in the field based on the variability will help in developing the variable rate prescription. Apart from the soil, other factors affecting production potential such as weeds, disease, insects need to be considered. They also often have spatial dependence and their effects can be magnified within different regions of the field. Understanding and addressing all limitations that may exist within and among management zones is important.

“I think the best prescriptions are developed using multiple sources of information and tools available, including historical and local knowledge,” Schoenau says. “It is not an easy task and takes some time and patience.

“I think the best prescriptions are developed using multiple sources of information and tools available, including historical and local knowledge.”

“There are some gains that can be made for precision applications of an input, such as fertilizer. A single year of evaluation is not enough, we need to be considering patterns over a long period of time, how fluctuations in growing season conditions are influencing the response. The challenge is reliably predicting those upcoming growing season conditions when making decisions at the beginning of the season.”

Although we have better predictive models of upcoming season conditions, there is so much variability on the Prairies from year to year, it is really difficult. Weather is always unknown, and can change things significantly in terms of variable rate prescriptions depending on a wet year or dry year scenario. For example, in drier years, the low spots may be where inputs should be increased due to higher productivity potential, but in a wet year those low areas may flood out with inputs lost. Enhanced efficiency products that reduce loss would be especially appropriate in those areas under those conditions. Unknown future conditions are always a challenge when making decisions at the start of the season.

Implementing precision applications of an input can involve some fairly sophisticated approaches with high-tech equipment, or in some cases can be quite simple. Schoenau notes, approaches like overwintering cattle on fields and field areas where fertility is poor, or using low spots in a field with excess soil moisture to seed late for green feed. It may be taking a standard input package for a particular crop and fine-tuning it to vary rates across a field or making adjustments among different fields as a good first step. Or it may be a very sophisticated VR prescription for the several management areas across a farming system.

“It’s important to recognize that there isn’t one silver bullet or simple formula, one size does not fit all. That’s why there are a number of service providers that come at it from different angles using different approaches,” Schoenau explains. “They all have their specific advantages and fit to customers with different needs. To really make it work there needs to be knowledgeable people who understand the biology, chemistry and physics of what is happening out in that field to develop robust variable rate prescriptions. There will be benefits to prairie cropping systems, but it takes time and effort by everyone to figure it out.”