What nitrogen rates should you use with today’s high-yielding hard red spring wheat varieties to reach your yield and protein goals? And what are the optimum choices for nitrogen (N) fertilizer sources, placement and timing? A two-pronged research effort is underway to answer these crucial questions for Manitoba wheat growers. 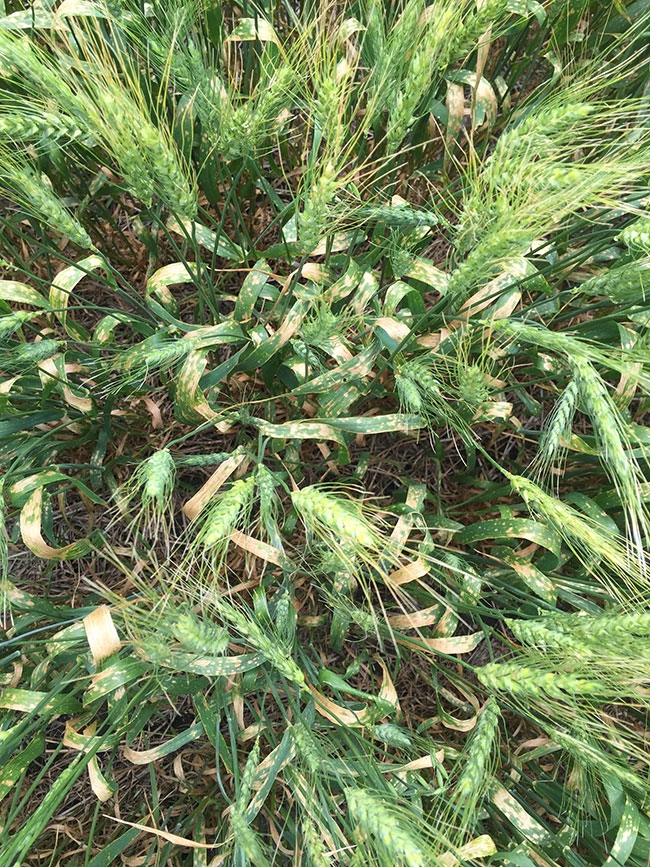 “It has been about 40 years since Manitoba did some of the experiments to determine wheat’s nitrogen fertilizer needs. So our historical recommendations are limited to obsolete wheat varieties like Neepawa that don’t yield as much as today’s varieties, and the yield goal is limited to 50 bushels per acre maximum yield,” notes Don Flaten, a soil scientist at the University of Manitoba. “But modern wheat varieties are yielding up to 100 bushels per acre. So if we use our traditional rule of thumb of 2.5 pounds of N per bushel of wheat for milling quality, we would need 250 pounds of N, as soil nitrogen plus fertilizer nitrogen, to achieve the yield potential of the current varieties.”

This work has two components: a small-plot project led by Flaten and his colleagues at the university, comparing a large range of nitrogen management options; and on-farm strip trials co-ordinated by Heard, which are looking at a few key possibilities.

Many, many small-plot treatments
The two-year, small-plot project started in 2016 with funding from the MWBGA. It involves six sites across Manitoba: two intensive “gold” sites hosted by the University of Manitoba and four less intensive “silver” sites managed mainly by Manitoba’s Diversification Centres. Amy Mangin, a technician in the university’s department of soil science, is managing this complex project’s diverse nitrogen rate, source, timing and placement treatments. Table 1 lists the treatment details.

One group of treatments is studying nitrogen fertilizer in a single spring application. These treatments are comparing rates from zero to 200 pounds per acre, applied as urea mid-row banded at seeding or as Agrotain-treated urea broadcast after seeding. Agrotain, a nitrogen stabilizer, is added to reduce volatilization losses from the broadcast urea. The other group of spring-only treatments involves two combinations of environmentally smart nitrogen (also known as ESN, polymer-coated urea) and urea, to see if ESN provides yield and/or protein advantages.

The project is also evaluating various split nitrogen treatments to see if applying some of the nitrogen later in the growing season helps reduce the problems associated with a single application of a high fertilizer rate at planting. Researchers are applying 80 pounds of nitrogen per acre at planting (either mid-row banded urea or broadcast Agrotain-treated urea), and then applying another 30 or 60 pounds in-season.

The stem elongation and flag-leaf applications are broadcast Agrotain-treated urea. The post-anthesis applications are liquid foliar applications: either a urea ammonium nitrate (UAN) solution diluted by 50 per cent with water, or urea dissolved in water, which is thought to be a little less damaging to the plant’s leaves. To reduce leaf burn from the foliar treatments, the project team not only diluted the fertilizer but also applied it in the evening and, if possible, when a fair amount of dew was present.

“The theory is that, because nitrogen [by the flowering stage] is being remobilized or transported from the wheat’s leaf material to the head where the grain is forming, then this post-anthesis foliar application would supplement the plant’s own vegetative reserves of nitrogen with some extra fertilizer nitrogen,” Flaten says.

In addition, Mangin and Flaten are assessing various tools for estimating nitrogen levels during the growing season. The project team is taking readings with a GreenSeeker sensor, an active normalized difference vegetation index (NDVI) sensor, and a SPAD chlorophyll meter before each nitrogen application at stem elongation, flag-leaf and anthesis. Just prior to heading, they are collecting flag-leaf samples for nitrogen testing and soil samples for soil nitrate-nitrogen analysis. They will be analyzing the data to see if the tools would help make decisions on in-season nitrogen applications.

And, as if all that work isn’t enough, Flaten and Mangin are also evaluating three soil tests that have been proposed for estimating the amount of soil nitrogen that will become available during the growing season through the breakdown of organic matter. Accurate estimates of this would be very helpful in making nitrogen fertilizer decisions, but there is no standard test at present.

Flaten describes the three tests: “One is a measure of soil respiration or carbon dioxide, but respiration isn’t always related with nitrogen release, so that may not be an excellent method. We’ve got another method that uses a weak solution of baking soda as a very mild chemical extractive that takes out some of the easily decomposed organic matter. And we are using a very simple test where the soil samples are split in half. One half goes directly to the lab [for nitrogen analysis] as soon as possible after the sample has been collected. The other half is retained at room temperature for four weeks and then it is sent to the lab to see how much additional nitrogen has come out from the sample over that one-month period.”

Preliminary small-plot results
“In our preliminary yield results, we are seeing nice rate responses to our spring-applied fertilizer. And our in-season top-up treatments – the stem elongation and flag-leaf applications – are yielding just as good as the spring-applied treatments if not better. But we are seeing a bit of a yield decrease with our foliar applications after flowering, probably due to leaf burn from the foliar application,” Mangin says.

“Overall for nitrogen rates, we are seeing that the standard recommendation of 2.5 pounds of N per bushel might be over-recommending our nitrogen for our yield potential that we have.”

They expect to have the protein results analyzed by late winter.

“This is just the first year of the project; there is another year to go,” Flaten says. “One of the big challenges with these types of recommendations is that we need to account for the variability in growing conditions from one year to the next or one site to the next. So it is not only a case of getting all of our data pulled together for the 2016 growing season, but we are also really looking forward to incorporating the information from 2017 before we start making any conclusions.”

Their goal is to translate the results into some key agronomic decision-making tools.

For example, they are hoping to come up with an updated typical value for the number of pounds of nitrogen it takes to grow a bushel of high quality, high protein, milling quality wheat with today’s high-yielding varieties. Flaten says, “That number will likely vary from variety to variety, from location to location, and with the fertilizer placement, timing and source, so we are anticipating we’ll get a range of values. But we want to know what a typical value would be. For instance, if we can cut the traditional rate of 2.5 pounds down to two pounds of nitrogen, then that will be good for farmers’ pocketbooks and good for the environment.”

Highlights from the on-farm trials
So far, the on-farm strip trials have taken place in 2015 and 2016 with support from the MWBGA and the Growing Forward 2 Growing Innovation On-Farm Program.

Heard has been working with the MWBGA and interested farmers to decide which treatments to include in these trials. “On-farm testing demands research techniques, meaning that the strips need to be replicated, so the most we can compare in a field are two or three treatments at a time,” he says. “We have to be very selective.”

They have chosen to tackle three aspects of nitrogen management for high yield and high protein wheat: higher nitrogen rates; post-anthesis nitrogen; and ESN. Each of the treatments have predominantly been applied to AAC Brandon, Prosper or Faller varieties.

They have conducted 30 trials to date. In each trial, the farm co-operator applied the treatments in field-length strips that were replicated three or four times, depending on the co-operator. Heard notes, “Part of my objective was to work with these top, keen farmers as they hone their on-farm testing skills. The legacy of this project is that these farmers now are familiar with the rigour and procedures by which to test practices or products on their farms.”

Three different rates of spring-applied nitrogen were compared in 12 trials. “Each farmer applied their base rate of nitrogen – what they thought was an appropriate rate – and then applied an additional 30 pounds or an additional 60 pounds of nitrogen per acre. Then we compared the results to see if their current fertilization practices were adequate or not,” Heard says.

The farmers’ base fertilizer rates ranged from 70 to 145 pounds of nitrogen per acre. And, when the soil nitrate-nitrogen content was included, the total base rate nitrogen supplies ranged from 105 to 173 pounds per acre.

“Judging from our results from the 12 trials, in most cases the base rates were adequate for yield and generally adequate to produce good protein. Only once was there a yield or protein advantage to increasing nitrogen above the farmers’ base rates,” Heard says.

“So that is good news – the current nitrogen fertilizer rates of those producers are close to optimum for yield levels the past two years.”

Fifteen trials looked at post-anthesis nitrogen treatments. Heard notes, “A number of farmers are already using post-anthesis applications to try to boost protein levels. We decided to compare a recipe that has been around for some 20 years, and we were hoping that, with a number of farmers to evaluate the practice, we would be able to see how consistent and predictable the increase in protein is.”

In the post-anthesis treatments, the farmers applied their base rate of nitrogen in the spring and then, about a week after flowering, they applied a foliar application of UAN at 30 pounds of nitrogen per acre, diluted 50:50 with water. They applied the diluted UAN either at night or in the morning, avoiding the heat of the day to reduce the risk of leaf burn. This treatment was compared to the farmer’s standard spring-applied nitrogen methods.

“The foliar application usually caused some leaf burn but avoided yield loss. Seven out of 15 of the trials had significant increases in protein. However, those increases varied a lot, so the practice is unpredictable regarding how much, if any, benefit you are going to receive,” Heard says.

The average yields were 69.6 bushels per acre (bu/ac) at the base rate and 68.8 bu/ac with the post-anthesis treatment. The average protein contents were 13.9 per cent (base rate) and 14.4 per cent (post-anthesis). A premium of some 60 to 70 cents per protein point would be required to cover a cost of $20 to $25 per acre for the nitrogen fertilizer and its application, assuming a yield of 70 bu/ac and a 0.5 percentage point increase in protein.

Two of the three ESN trials had a slight but significant increase in protein. Yield was not significantly affected by the ESN treatment. The economic analysis of these results has not yet been completed.

In the coming months, Heard will be meeting with the MWBGA and the participating farmers to discuss the 2016 results in depth and to ask the farmers whether they want to conduct more on-farm trials in 2017.