Field peas are less responsive to phosphorus than other crops, but that does not mean you can ignore phosphorus fertility. 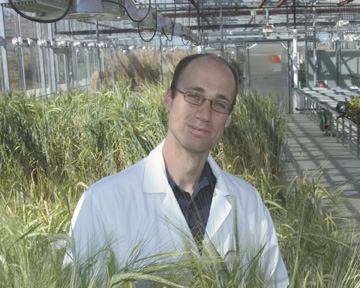 Field peas require large amounts of phosphorus (P). For example, a 50 bushel
per acre crop of peas takes up at least 38 pounds of P2O5 per acre, and removes
about 0.62 pounds of P2O5 per
bushel at harvest – about 31 pounds of P2O5
per acre. But because field peas often do not show response to fertilizer P,
the temptation is to skip P fertilization all together. However, this carries
some risk since field peas do respond to P fertilization on some soils. The
key to understanding when to add fertilizer P to field peas is knowing your
soil fertility.

"At lower levels of soil fertility, you can see a response depending on
environmental conditions," says Ross McKenzie, research scientist with
Alberta Agriculture, Food and Rural Development (AAFRD) at Lethbridge. "With
soils testing over 30 pounds per acre P, we have rarely seen a response."

McKenzie conducted trials in Alberta to evaluate the response of fertilizer
P additions in 52 different trials involving all soil zones in the late 1990s.
Those trials form the basis of Alberta's new P fertility recommendations on
field pea. He sorted the trials based on background soil test P levels to help
farmers get the most out of their P fertility program.

"For phosphate response in field peas, a 50 percent response rate is pretty
good, and that's where we needed to draw the line on P fertilization,"
says McKenzie. "A response one-half the time might seem low, but the yield
responses were high enough that it makes sense to fertilizer those low phosphate
soils."

Adrian Johnston, Northern Great Plains director with the Potash and Phosphate
Institute of Canada (PPIC) at Saskatoon, says that those results mirror another
study conducted across Alberta and Saskatchewan. In that study, 28 field trials
were conducted looking at pea response to increasing rates of fertilizer P.
In this study, all of the responsive trial locations had soil test levels of
less than 10 pounds P per acre. However, only 14 percent of sites with soil
test levels greater than 30 pounds P per acre showed a response to fertilizer
P.

"A lot of previous trials showed low response to P fertilizer. But if
you look at the trials, they had a lot of soils testing high in P. That gave
the impression that peas don't respond to P fertilizer," says Johnston.
"But the trend from these newer trials is clear. Where soil P deficiencies
are determined by a soil test, there is a good probability that field pea increases
will be achieved with fertilizer P."

New recommendations based on soil test levels
Based on McKenzie's research, AAFRD issued new phosphate fertilizer recommendations,
with soil P fertility identified through soil tests. Those recommendations support
P fertilization in soils testing lower than 30 pounds P per acre in the top
six inches. Soil tests above this level receive a recommendation for maintenance
applications of 15 pounds P2O5
per acre, or about the amount removed in the grain of a 25 bushel per acre pea
crop.

McKenzie says that, unlike nitrogen recommendations, P fertilizer rates do
not change according to target yield. Rather, the addition of P fertilizer is
done to ensure that the plants are not deficient early in the growing season.
"You would think that if you increase P, you will see an increase in response,
but that's not the way it works. With P, you either have enough, or you don't."

Johnston says the most recent soil test surveys show that a significant portion
of prairie soils is low to medium in P fertility. Eighty percent of Saskatchewan
soils, 58 percent of Manitoba soils and 57 percent of Alberta soils tested for
P had levels less than 20ppm, or 40 pounds of P per acre.

While soils that have soil P fertility above 30 pounds P per acre generally
do not show a response to added P fertilizer, McKenzie says that it is still
a good agronomic practice to apply a maintenance level of fertilizer, in the
range of 15 pounds of P2O5 per
acre. He explains that rate was chosen, not as a total replacement for the P
removed from the field, but as a hedge against cold soils that limit early season
P availability. "Under those conditions, if there is a yield response,
it is most likely due to the starter effect," explains McKenzie. Plus,
the maintenance level helps to ensure that field peas are not mining the soil
of P, and hurting P availability of subsequent crops.

Indeed, under most conditions, field peas do not respond to starter P fertilizer
the way small seeded crops do. Part of the reason, explains Johnston, is that
large seeded peas have a larger P content in the seed than cereals or oilseed
crops. That means peas normally have the time to develop a good root system
and can start to access soil P reserves before their seed P reserves run dry.
However, he agrees with McKenzie that a small maintenance application of P can
act as a hedge against cool soils where the starter effect may be observed.

The large seed reserves may also explain why P fertilizer placement is not
critical with peas. Seed-placed or side-banded placement worked equally well
in the AAFRD trials. However, peas are sensitive to seedrow P fertilizer and
a maximum of 15 pounds of P2O5
per acre is recommended in the seedrow. Not coincidentally, that also corresponds
with the amount of maintenance P fertilizer recommended for soils testing medium
to high in soil P. McKenzie says that in developing the maintenance guidelines,
they wanted to make it easy for farmers to apply fertilizer P without having
to side-band, or pre-seed band.

Still, the message has been slow to get out. Johnston says that part of the
difficulty is that farmers who have had good P fertility programs over many
years, an annual application of 25 to 30 pounds of P2O5
over the last 20 years for example, will not see much of a pea yield response
to fertilizer P. As a result, and especially in times of high fertilizer prices
and low crop prices, the temptation is to cut back on fertilizer P. That might
be okay for fields testing high in soil P, but carries a risk for low P soils.

"What the research shows is that you have to be careful if you grow peas
on deficient land. The last thing you want to do is grow peas and draw down
soil nutrient reserves," says Johnston. "Plus, you are hurting yield
on those low P soils if you aren't fertilizing to recommended rates." -30-