Seven decades into hybrid corn production, plant scientists are still working on yields and stress tolerance, but there’s a new approach on the research bench.

It isn’t about squeezing another thousand seeds into an acre or making the stems grow a foot taller and it isn’t about importing flashy genetics to protect the corn from fungicides, herbicides or insecticides.

It’s really about the plant architecture and the switches that direct the metabolism. Labs are starting to adjust the flow of sugars in early development, and they are starting to aim for more rows and more kernels to a row.

The net result is a substantial yield boost potential and ability to “come back” after a setback from growing season drought.

New York
A team at Cold Spring Harbor Laboratory (CSHL) on Long Island, led by David Jackson, has been doing research and creative thinking for more than 15 years on molecular genetics of corn, rice and other grasses.

Back in 2001, Jackson cloned a maize gene now known as fasciated ear2 (fea2). Analysis by a colleague, Peter Bommert, linked fea2 to a specific point on a chromosome that connects with yield and other complex traits.

When the fea2 gene is missing in maize, the resulting ear is able to produce more than 30 irregular rows of kernels, but the ear is short and deformed. Elite modern hybrids produce up to 20 rows of kernels.

Reporting a breakthrough in Nature Genetics, February 2013, Jackson said: “Our simple hypothesis was that an increase in the size of the inflorescence meristem – the stem-cell reservoir that gives rise to flowers and ultimately, after pollination, to seeds – will provide more physical space for the development of the structures that mature into kernels.”

Jackson’s team produced maize that averaged 18 to 20 rows (up from 16 rows in their normal reference stock) and an average of about 300 kernels (up from around 260) by using a weakened version of the fea2 gene. That’s about 13 per cent more kernels than a typical ear of corn.

The next step, now in progress, is to cross-breed the “weak” fea2 gene variant into the highest-yielding hybrids used today. The work is being carried out by DuPont-Pioneer, a seed company that has supported and shares in CSHL plant research.

A broader implication came out in December 2013, when the CSHL group published a report on genetic controls “that shape grain-bearing inflorescences” of cereals.

Corn tassels and ears are two distinct forms of inflorescence in maize. CSHL had identified the molecular mechanisms and gene regulatory networks foundational to the branching architecture of the plant stem cells after the plant flowers. It applies to grasses, including cereal crops, corn, rice and other crops.

Ultimately, the branching patterns in stem cells of inflorescences, called meristems, produce the fruits and grains that feed most of the earth.

In the complex study, Jackson wrote: “Our analyses capture dynamic molecular signatures underlying grass-specific developmental programs with clear relevance to grain yield. Together, these data provide a rich resource for studying many aspects of grass inflorescence evolution and development, predictive modeling of crop improvement and translation to other cereal crops bearing grain on panicles or spikes.”

North Carolina
As a sugar factory, corn is famous. Sucrose is the most common sugar in plants. As a disaccharide, it’s composed of glucose and fructose. A bushel of corn will produce about 33 pounds of high fructose corn syrup.

Another sugar, extremely rare, is found in all plants, including corn. This sugar, trehalose, is another disaccharide. It is composed of two glucose molecules. Until recently, it was impossible to detect and only a few plant scientists were aware of its existence.

Although only trace amounts of trehalose can be found in the corn plant, this novel sugar packs a “mighty wallop” through its role in regulating sugar metabolism. It impacts everything from plant architecture to yield and drought tolerance.

This July, an article in Nature Biotechnology reported it now is possible to improve yield in well-watered and drought stressed corn through manipulating trehalose-6-phosphate phosphatase (TPP) activity in young developing maize ears. TPP is one of two enzymes responsible for the production of trehalose.

The study, with 12 co-authors, was conceived at the Syngenta biotechnology facility in Research Triangle Park, N.C., by Michael Nuccio, senior research scientist with Syngenta, and Mark Lagrimini, principal scientist and group leader for Syngenta from 1999-2004. His team took a metabolic pathway engineering approach to improve stress tolerance, leading to today’s outcome. Today, Lagrimini is a professor of plant molecular biology in the department of agronomy and horticulture at the University of Nebraska-Lincoln.

He adds, “We wanted to find out just how this rare sugar trehalose was able to cause dramatic changes in growth, in reproduction, yield and stress tolerance. We knew once we could control sugar metabolism we could impact plant productivity from many angles.”

Using the available DNA sequence from the rice genome (rice being a close relative of maize), the Syngenta team eventually engineered a switching mechanism, using trehalose levels to regulate sucrose levels in the immature corn ear. By reducing the concentration of trehalose, they increased sucrose in the spikelets that develop into corn ears. This increased the number of kernels and amount of corn available for harvest.

Describing the internal dynamics, Lagrimini says, “We are manipulating the control switch that tells the plant how much sugar it’s going to make or how much starch it’s going to make. Trehalose is in the middle of a triangle with corners for sugar, starch and metabolism.

By manipulating that pathway, we can move the emphasis to making more sugar, more starch or more growth.”

The corn plant has multiple copies of the trehalose pathway genes. They are co-opted for a variety of functions in addition to yield, including salt tolerance, insect resistance and control of the day/night cycle.

“A few years ago, Jackson published that the mutation that causes branched inflorescences was determined by a gene in the trehalose pathway,” Lagrimini says. “Hopefully, in the next couple years, we will understand how that gene in the pathway works to affect branching.”

When he started biotechnology research more than 30 years ago, Lagrimini says the focus was on plant hormones. They were thought of as the main plant regulators. “That’s changing. Over the last 10 years, people are finding that sugars and nitrogen are extremely important at regulating things in plants,” he says.

However, how things will change for farming is not really predictable. “When we go in and change the trehalose pathway, we see effects like much bigger leaves, bushier plants, taller plants, plants that dry down faster for harvest, plants that establish better in spring and plants that are more resistant to stress,” Lagrimini says. “We have a significant amount of work to do to understand what’s going on here.” 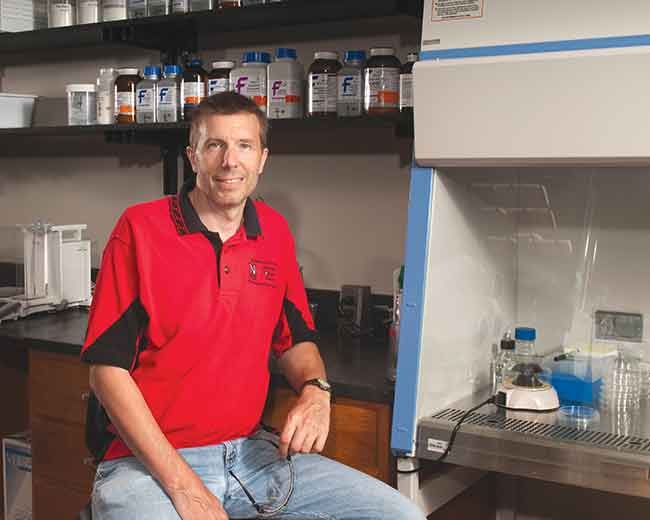 Trehalose metabolism was being worked on by a group in the Netherlands. After seeing their results in model plants Seven decades into hybrid corn production