Dry conditions can significantly reduce soybean yields, so a five-year project is underway in Ottawa to add drought tolerance into Canadian soybean varieties.

“Drought stress is the major abiotic constraint to high stable soybean yields in Eastern Canada. From 2000 to 2012, Ontario had five summers that were drier than the long-term average. That is one year in three with drought,” notes Malcolm Morrison, the project’s principal investigator. He is a plant physiologist at the Eastern Cereal and Oilseed Research Centre (ECORC) of Agriculture and Agri-Food Canada (AAFC).

Morrison explains the project isn’t about prolonged periods of extreme drought like the Dirty ’30s. Instead it’s about short periods of dry weather within a growing season. “This is called ‘periodic drought,’ and it can be quite dangerous for soybean yield, especially if the dry weather occurs during sensitive growth stages,” he says.

“We’ve found that the first three or four weeks after the beginning of first flower is about the most sensitive stage to changes in precipitation. If you get precipitation at that time, you will be rewarded with a higher yield. But if you get drought, you will get fewer flowers producing pods and fewer seeds in those pods, and that will affect yield.”

Along with yield reductions, dry conditions can also influence seed quality. As rainfall decreases, protein content decreases and oil concentration generally increases slightly. In addition, the seeds tend to be smaller and may be misshapen or wrinkled.

Morrison points out the ability to tolerate periodic drought is particularly important for reliable soybean production in Canada. With our relatively short growing season, a soybean plant will have little time later in the season to compensate for a reduction in seeds that has occurred due to dry weather.

Screening for multiple mechanisms
The project, which runs from 2013 to 2018, is screening non-GMO soybean lines from AAFC and Sevita International for drought tolerance. The selected lines go to the breeders for development of new and improved Canadian soybean varieties.

Many characteristics can influence how well a soybean plant does under dry conditions; some examples include a deeper root providing access to deeper soil moisture, or early vigour so the plant shades the soil surface sooner, or more efficient water use, or earlier closure of leaf pores, called stomata, to stop water loss from the plant.

“There are lots of different drought-tolerance mechanisms that can be brought into play in a plant, but those mechanisms can be detrimental to yield in a year with a lot of moisture,” Morrison explains.

He gives the example of earlier stomata closure. When the stomata are open, they allow water vapour and oxygen to escape from the leaf, and carbon dioxide to enter. So, earlier stomata closure does more than stop water loss. “If a plant closed the stomata early, then it wouldn’t have enough carbon dioxide for photosynthesis even when the drought conditions aren’t that bad. If we bred a plant like that, it would be really good in dry conditions, but not in wet conditions.”

One key drought-response issue for soybeans is that dry conditions can halt nitrogen fixation. Morrison says, “Nitrogen fixation is a symbiotic relationship between a bacterium and the plant that produces the root nodule. The bacteria that live in the nodules receive carbon from the plant and in return supply the plant with nitrogen. But as the plant responds to a dry condition, the stomata close and it stops actively photosynthesizing, it stops producing carbon, and it stops moving that carbon down to the nodules and giving the bacteria food.”

Given the complexity of drought-response traits, Morrison isn’t screening for just one or two specific traits. Instead, he is using a method that identifies the plants that “can capitalize on several drought-tolerance mechanisms to produce high yields under dry conditions and high-moisture conditions.”

The researchers want to find soybean lines with very little yield difference between the irrigated and rain-fed plants. “The cultivar with the lowest Delta Yield is the most drought-tolerant, yet won’t suffer a yield drag when there is no drought,” Morrison explains. “This method has been used in the United States to develop a water-use-efficient corn hybrid that yields 7.4 per cent higher in drought and 3.4 per cent higher in normal water situations.”

For the irrigated plots, Morrison uses a product called Drip Tape made by Toro. “It is a plastic tape that is buried at five inches deep. Every 30 centimetres, there is a small slit in the tape, and that leaks at a certain amount when you put water into it. On a daily basis, I give the plants between two and three millimetres extra precipitation.”

This subsurface irrigation method has a lot of advantages. Morrison says, “It saves on water; we don’t have to apply a huge amount of water to the surface. It also allows us access to the field to take measurements because the soil isn’t mucky. And it allows a fairly precise application of water; we know how much we’re putting on per area.”

According to Morrison, the Delta Yield approach works very well in most years, although the differences between the irrigated and non-irrigated yields are not as noticeable when precipitation is abundant, as it was in 2014 in the Ottawa region. But he adds, “Even in 2014, we still had periodic drought in the first two weeks of August. That is always going to occur, and that is why we are doing the research – we’re aiming for a plant that has the capacity to kick-start mechanisms that get it through those rough points in the growing season.”

Even though drought-tolerance traits can be doubled-edged in wet years, some drought tolerance is almost always better than none, as shown in research led by Thomas Sinclair of the University of Florida. The researchers modelled the response of soybeans with different drought-tolerance traits using 50 years of weather data for 2655 U.S. locations. “They found that, in the vast majority of times, incorporating any drought-tolerance mechanism is actually beneficial because at some point in time during the growing season you are going to have a periodic drought, even in years of abundant moisture,” Morrison says.

When he first started experimenting with the Delta Yield approach, he tested it on some old soybean varieties. “One of those was Maple Arrow, released in 1976. Maple Arrow is a watershed variety because it was the first short-season variety. It is the progenitor of all the short-season soybean varieties in Canada. Interestingly, we found that Maple Arrow had quite a low Delta Yield in a dry year, so it is inherent in its capabilities for drought tolerance.”

Morrison is making good progress in the current project. “Every year, we test 20 Sevita experimental lines and 12 Ag Canada experimental lines to try to find drought tolerance. We have found some lines that have great performance under irrigation but not very good performance under normal conditions. And we’ve found some with very low Delta Yields, which is what we’re looking for.”

He notes, “In the first year of the project, we tested a lot of foreign soybean material, lots of Chinese lines and a couple of Indian lines.” However, most of the drought-tolerance genetics they are testing originally came from U.S. soybean breeding programs, which have identified lines with various strategies for dealing with dry conditions. The breeding programs at ECORC and Sevita have been and are breeding those genetics into Canadian-adapted backgrounds for testing by Morrison. For example, Elroy Cober, the soybean breeder at ECORC, is currently incorporating genes for drought-tolerant nitrogen fixation, and Morrison will be screening those lines in the future.

Overall, this project aims to contribute to the development of Canadian soybean cultivars that have greater yield stability across all years – whether the conditions are dry, normal or wet. “This will result in greater average yields and higher profits for Canadian soybean growers,” Morrison says. 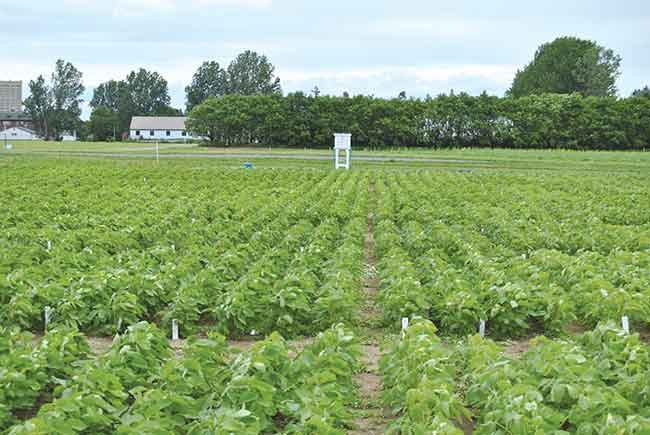