Last year and this year, with the cool, wet weather at the start of the growing seasons, both Pythium and Phytophthora resulted in re-plantings of corn and soybean. So notes Albert Tenuta, Ontario Ministry of Agriculture, Food and Rural Affairs (OMAFRA) field crop pathologist. “Most fields in Ontario have some or both of these fungal root rot pathogens present. We hope that a large U.S.-based project involving Ontario will help provide better tools to combat these diseases in future, but farmers must always do their part.”

There are many species of Pythium found in corn and soybeans and there are hundreds of varieties of Phytophthora which primarily affects soybeans. To achieve good control of either pathogen, it’s important for growers to fully employ an integrated pest management (IPM) system, notes Tenuta. As OMAFRA states on its website (see sidebar), eliminating these diseases is not possible, but crop yield losses can be reduced by following good management practices.

“It’s obviously important to choose soybean varieties with resistance genes as well as field/partial tolerance,” Tenuta explains. “Both should be present. You can have 50 races of Phytophthora in Ontario in one field, so it’s hard to have soybeans that are resistant to all of them. That’s why a general tolerance is really important for the plants to have.”

Delay planting as long as you can, until conditions are dryer and will result in a rapid and uniform emergence (13 C and above is recommended). Other IPM techniques include the removal of water from fields through tile drainage and minimization of soil compaction. Compaction, notes Tenuta, increases the soil’s water-holding capacity, inhibits root growth and generally stresses the crop. Also be sure to use new fungicide seed treatments, such as ethaboxam.

Residue management is important in certain cases. “There is some potential risk with crop residue, which is left as part of no-till cropping practice, but these fungal diseases primarily survive in the soil and on infected roots,” Tenuta explains. “However, residue can be a factor with growers who plant early or have cool wet soil conditions. The residue can make the soil stay cooler and wetter, which is more favourable for both Pythium and Phytophthora.” Pythium generally finds it more difficult to flourish when phosphate levels are adequate for good root growth. Use a good fertility program and make boosting organic matter content a priority, especially in heavier soils. Rotate crops with three years between bean crops of any kind.

Breeding efforts
There are no resistance genes yet to these fungal pathogens, but those involved in a large-scale bilateral ongoing project hope to change that. “This North America-wide initiative was started four years ago to look at distribution of these diseases, particularly the northern corn and soybean growing areas, genetic diversity and potential sources of resistance in corn and soybean,” Tenuta explains. “There are many partners involved.” He says that through surveys and lab work, if we can get a good handle on the distribution of infection rates and see if we have strains unique to northern production areas, this can aid in breeding programs.

Alison Robertson, associate professor and extension field crops pathologist in the department of plant pathology and microbiology at Iowa State University, is one of the leaders of the project. She says so far, she and her colleagues and grad students have learned much about distribution of these diseases, particularly in the northern corn and soybean growing areas. “I would say the pathogens that cause these diseases are widely distributed across the Corn Belt, but do not cause a problem every year since it all comes down to the disease triangle – pathogen plus host plus environment equals disease,” she explains. “From the surveys we did in 2011 and 2012, we do see some variability in the species present by latitude, although there are a few species that may be found at all latitudes.”

Robertson says the most important thing the team has probably learned with regards to biology of these pathogens is that pathogenicity is affected by temperature – some species cause more disease when it is cool, and some species prefer it warm. “We also know that susceptibility to fungicides used in seed treatments can vary among species,” she says. “Regarding infection, some species seem to cause more seed rot, and others more root rot, so the mechanism of resistance to each species may be slightly different.  In addition, soybean may be more susceptible to certain species at certain stages of germination and emergence. Basically, we still have a lot to learn.”

Study of pathogen genetic diversity is yet to come. “Most isolates in each species are very similar, although in preliminary studies we have identified a couple of ‘black sheep,’” Robertson says. “We need to confirm that these are truly members of the species in question.”

Marty Chilvers, assistant professor in the department of plant pathology at Michigan State University, is also a project leader. He has been doing molecular work with colleagues and grad students, including the development of diagnostic tools. “We now have diagnostic assays for a few Phytophthora soybean and corn pathogens, which allow for faster diagnosis,” he says. “Right now, samples have to be sent to the lab, but one type of assay (isothermal) will eventually be able to be used in the field by crop consultants and pathologists.”

In terms of what growers in Ontario and Eastern Canada should do this year, Tenuta says that if they noted Phytophthora seedling issues in their soybeans, they should be scouting in late July and in August for disease presence. “Gearing up for harvest, make note of what pests and diseases are present in each field,” he says. “This is critical with future management plans, and also helps determine whether the variety you’ve planted has enough resistance/tolerance to provide adequate protection under local conditions.”

*Facts about Pythium and Phytophthora 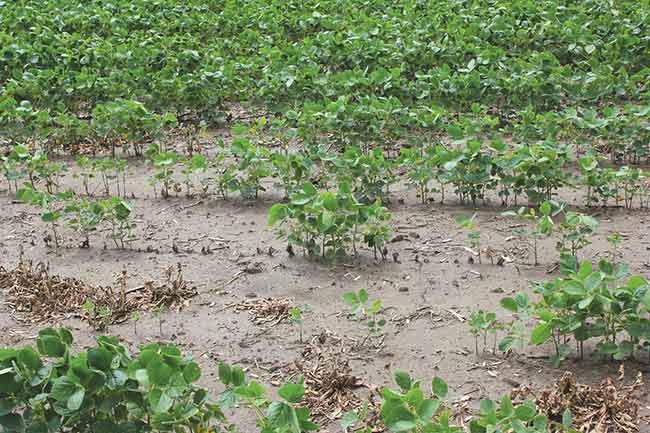