News
The ups and downs of winter wheat acreage 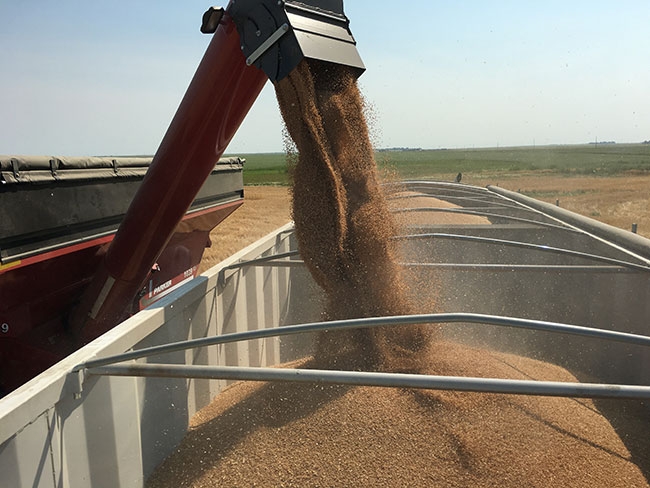 “The advantages of growing winter wheat are still pretty much the same,” says Brian Fowler, a professor in the department of plant sciences at the University of Saskatchewan. “The biggest problem is getting winter wheat into the rotation.”

Fowler is a longtime winter wheat plant breeder and proponent. He says that while winter wheat genetics have overcome many of the earlier challenges of disease resistance and winter hardiness, seeded acreage has been a moving target, partially related to projected net returns and partially due to seeding logistics.

“The whole agricultural profile has changed. Farms are bigger and the growing season is getting longer. Farmers are growing later maturing spring crops that yield higher, so they don’t have as much flexibility to take time out of harvest to seed winter wheat,” Fowler says. “And those higher-yielding spring wheat crops have lower protein which starts to put them in competition with winter wheat.”

Paul Thoroughgood, an agrologist with Ducks Unlimited, agrees that seeding winter wheat in early fall can be a challenge. He says it takes another level of management to seed while there may be crop left to harvest. Another change at the farm level is that growers now use the same tractor to pull grain carts as they use to pull the air drill to seed a winter wheat crop. That adds an additional layer of logistics.

“I still contend that the first time you get winter wheat into the rotation is the hardest. After that, you are harvesting some of your acres in August, and that takes pressure off the rest of the harvest,” he says.

Thoroughgood offers another interesting perspective on winter wheat attitudes. If a durum wheat grower has a crop failure, because of something like Fusarium head blight that devastated the crop in 2016, they will still grow it again. But if they have a bad experience with winter wheat, first time growers are less likely to try it again. He cautions growers who have some winterkill in 2018 to recognize that it was an unusually tough winter. “I think a lot of concern people have regarding winter kill, overall, is misunderstood,” Thoroughgood says. “That is probably an unnecessary concern except in rare years.”

Certainly, economics is a driving force behind the decision to grow winter wheat.  Thoroughgood keeps a projected average profit per acre comparison of spring, CPS, winter wheat and durum wheat based on provincial crop planning guides. These government guides use estimated costs and returns as the basis for crop planning. While yields, commodity prices and expenses vary, Thoroughgood says that winter wheat has performed well against the other wheat varieties. Over the long term, winter wheat has generally provided a higher net return than the other wheat classes.

However, Thoroughgood cautions that farmers need to look carefully at the planning guide numbers and use their own projected revenue and expenses. For example, the commodity price used for winter wheat varies across the three Prairie planning guides from $4.59 in Saskatchewan to $4.85 in Manitoba. He says farmers should look to local markets and go beyond just their local elevator to see if they can get better prices. He says in early spring 2018, a local ethanol plant was contracting for $5 per bushel. On a 70-bushel winter wheat crop, an extra 50 cents per bushel adds up quickly – $35 per acre more.

A crystal ball also helps. With a large amount of medium protein grain in the western Canadian market from the 2017 spring wheat harvest, winter wheat prices have been discounted in the milling market.

“One major problem is market access. Prices south of the border are higher. We used to blame the Canadian Wheat Board for only marketing high-protein wheat, but that doesn’t seem to have changed with today’s grain marketers,” Fowler says. “There is a large established market for a wide range of quality types that could be tapped into if a competitive winter wheat production system could be put in place in Western Canada.”

Thoroughgood says Canadian winter wheat growers along the U.S. border have been shipping grain south to take advantage of those higher prices.  He isn’t sure whether the grain buyers there are discounting winter wheat less than in Canada, or if they are better at capturing the lower protein wheat markets. The low Canadian dollar has also helped with growers shipping to the U.S.

Again, the provincial crop planning guides take different approaches to estimating expenses per acre. Saskatchewan, for example, takes an all-in approach for weed control, with an estimated cost of $62.93 per acre, while Alberta and Manitoba come in at $13.72 and $13.83 respectively.

Setting aside the measurable economic returns, Fowler and Thoroughgood both say there are other benefits that aren’t easily measured economically. Ecological and conservation benefits are high on the list. Soil conservation benefits are hard to measure. Helping to manage herbicide resistance may be measurable but varies by the status of herbicide resistance on each farm. Earlier, more timely harvests are advantageous, but seeding during harvest is a drawback. Fewer disturbances for waterfowl and upland game birds are an important ecological benefit.

“Farmers don’t get paid for ecological benefits in Western Canada, but that might change at some point,” Fowler says.