These days, many farmers rely on fast, convenient access to information to help them make the best management decisions for their crops. Now there’s a new tool called Mobile Integrated Pest Management (Mobile-IPM) that’s designed to make the often-challenging process of identifying crop threats much easier. 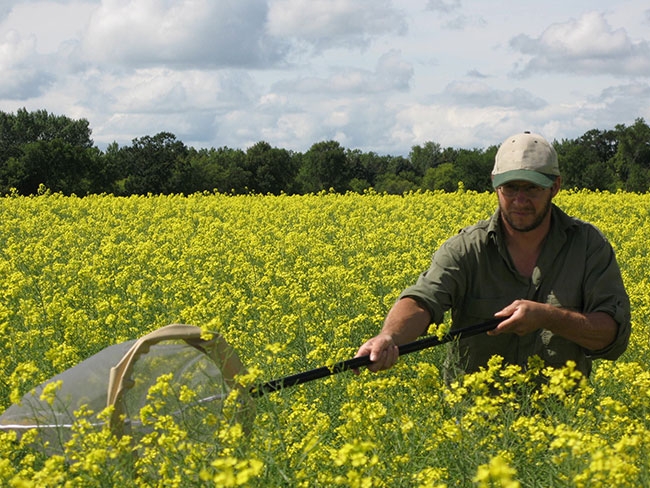 The free smartphone app was released in March and is available on iTunes and Google Play. A desktop version of Mobile-IPM also will be released soon.

“I think it will be received quite well by agronomists and farmers,” says John Gavloski, an extension entomologist with Manitoba Agriculture, who has collaborated on the app since 2014.

“The promise it holds is that it can make production more economical,” he adds. “You can save a lot of money by making wise pest management decisions, and there’s much decision-making that can be done through using an app.”

Mobile-IPM was developed through a joint venture involving university and government partners, along with the Western Grains Research Foundation. Barbara Sharanowski, a former University of Manitoba professor who now teaches entomology at the University of Central Florida in Orlando, Fla, leads the $1-million project, which is wrapping up this year.

“It’s really been a huge collaborative effort,” says Sharanowski, who first came up with the idea for the app six years ago while working at the University of Manitoba in Winnipeg.

“There is a real host of things that you can do with mobile technology that provides information for farmers,” she says. “Mobile-IPM is one more tool that people can use to help them make good pest management decisions for integrated pest management.”

Gavloski agrees: “Step one in integrated pest management is knowing what you’re dealing with, so it will help in that regard.”

Pest ID tool
The pest ID tool in Mobile-IPM currently enables growers to identify insects in their wheat and canola fields, although there is the potential to add more crops in the future. Growers can also use it to identify problem weeds in field crops.

The system is based on a question-and-answer model that takes the user through an identification process where they can input information about the appearance of the pest and other factors such as weather conditions and the type of crop damage.

Growers can also take a picture of the pest and compare it to pictures in the Mobile-IPM database, and if they need further assistance, the app provides links to local agronomists and entomologists who may be able to help.

Once the grower has confirmed the identity of an insect threat, the app has a guide to more information about how to manage the pest threat, including registered insecticide and herbicide listings and suggestions for cultural or biological control measures.

Mobile-IPM also provides economic thresholds for pests, which, as Gavloski points out, can be a great help in facilitating best practices for integrated pest management.

“By using economic thresholds, we can reduce unnecessary pesticide applications,” he says. “This reduces pesticide costs, and the reduced use of broad-spectrum insecticides enables predators, parasitoids and pollinators to continue working in the field.”

Pest forecasting tool
The pest forecasting tool in Mobile-IPM offers real-time monitoring and forecasting and produces risks maps for potential insect outbreaks that are based on pest reports and data generated by growers, agronomists and provincial extension and Agriculture and Agri-Food Canada staff.

The forecasting component of Mobile-IPM is currently focused on Bertha armyworm, one of the most destructive pests of canola in Western Canada. Each time Bertha armyworm counts are done by users, levels of the insect presence will be added to the Mobile-IPM database – enhancing the app’s ability to track and predict an outbreak of the bug as it develops.

The crop management tool in Mobile-IPM allows farmers to keep a history of pests in their fields and how they’ve dealt with them, so they can make better management decisions in the future based on what’s worked the best.

According to Sharanowski, growers can also track almost every activity that’s been done in field, including planting and harvest dates, seeding rates, variety choices and crop rotation history. Information on crop storage and farm finances can also be recorded and tracked.

Mobile-IPM was developed with the help of numerous extension entomologists and plant pathologists in several provinces, but its forecasting component only pertains to Manitoba at the moment. In an effort to broaden the app’s potential usage, Sharanowski is currently seeking permissions from the Alberta and Saskatchewan governments to include their ag data in the Mobile-IPM system.

Gavloski is hopeful that the other Prairie provinces will eventually participate in Mobile-IPM. “It will certainly become part of our extension messaging once it’s out,” he says. “We’re hoping that we can do a good job promoting it and showing its value to growers and agronomists, and then once we’ve done that hopefully more people will jump on board,” he says.

The Mobile-IPM app is available for download on Google Play and iTunes App Store and at mobile-ipm.com.