It isn’t here yet, but Palmer amaranth is inching closer to the Canadian Prairies, and very little stands in its way.

The annual broadleaf weed – actually a species of pigweed native to the southwestern United States and Mexico – has become a major threat to cotton and soybean production in the U.S., and it’s moving north. As of the 2015 growing season, Palmer amaranth has shown resistance to five major modes of action in the U.S., including glyphosate, ALS herbicides, PPO herbicides, DNA herbicides and HPPD herbicides, according to Jason Norsworthy, a weed specialist at the University of Arkansas. It was found in South Dakota fields in 2014 and named North Dakota’s weed of the year in 2015 to generate awareness.

He says growers in the southern states are forced to use Group 15 herbicides to control the weed, and LibertyLink soybeans. “But we’re on the verge right now, where if we ever see resistance to Liberty, we will have no post-emergence option in soybean,” he says.

New research
According to Mithila Jugulam, assistant professor of weed physiology in Kansas State University’s department of agronomy, 2003 data from Kansas indicates that eight Palmer amaranth plants per metre of row reduced soybean yield up to 79 per cent.

“There is an immediate need to manage Palmer amaranth, as continued spread of the weed, without prudent management strategies, threatens to reduce conservation tillage throughout affected areas of the United States,” she says.

Jugulam’s team at Kansas State is working on characterizing Palmer amaranth populations, as well as analyzing mechanisms of resistance to glyphosate. Recently, they found populations in Kansas exhibited resistance to three modes of action in herbicides, including glyphosate.

She says Amaranthus species, including Palmer amaranth, are particularly dangerous because they can outcross, albeit at a low frequency, with related species. In other words, resistance can spread from one species to another species via pollen.

In brief, the plants use gene amplification to create multiple copies of a gene targeted by glyphosate, allowing plants to survive normal rates of application.

But Jugulam’s team has made another discovery: temperature stress can influence herbicide efficacy. Recently, the team analyzed the influence of cold temperatures on the efficacy of mesotrione, an HPPD inhibitor, on Palmer amaranth. “Results from this research suggest that the Palmer amaranth plants were two- to five-fold more and less sensitive to mesotrione when grown under 25/15 degrees Celsius, and 40/30 degrees Celsius [day/night temperatures], respectively,” she says, adding this means high-temperature stress conditions might warrant higher rates of mesotrione.

Chaff collection
Neil Harker, a research scientist with Agriculture and Agri-Food Canada in Lacombe, Alta., says the solution to managing Palmer amaranth is multi-faceted. Using a mix of modes of action is a key aspect of management, but Canadian growers are not doing it enough.

“I think most people go about doing the same thing until it’s a problem on their farm. People wait for a problem to arrive and then try to solve it,” he says.

The solution doesn’t just involve the use of herbicides, however. Farmers should plant a wide variety of crops, including winter and forage crops, he says. “And they need to look into what the Australians and some farmers in the southern U.S. are doing with chaff collection.”

In Australia, farmers have made a “huge impact” on the problem of wild radish and rigid ryegrass by collecting chaff or using Harrington Seed Destructors (HSDs). Canada received its first HSD, intended for AAFC research, in 2015.

“With combines, we spread successful weed seeds all over the field,” Harker says. “What chaff collection does is collect that chaff and burn it, feed it or mulch it to destroy the weed seeds instead of spreading around our most successful weeds.”

For now, Canadian growers need to focus on scouting and prevention. But not everyone believes Palmer amaranth will present a major problem to Western Canada even if – or when – it finally creeps over the border.

“Resistant or not resistant, Palmer amaranth is not a species that’s well suited to our climate. It’s a species that’s adapted to a longer growing season and warmer temperatures than we have in Western Canada,” he adds. 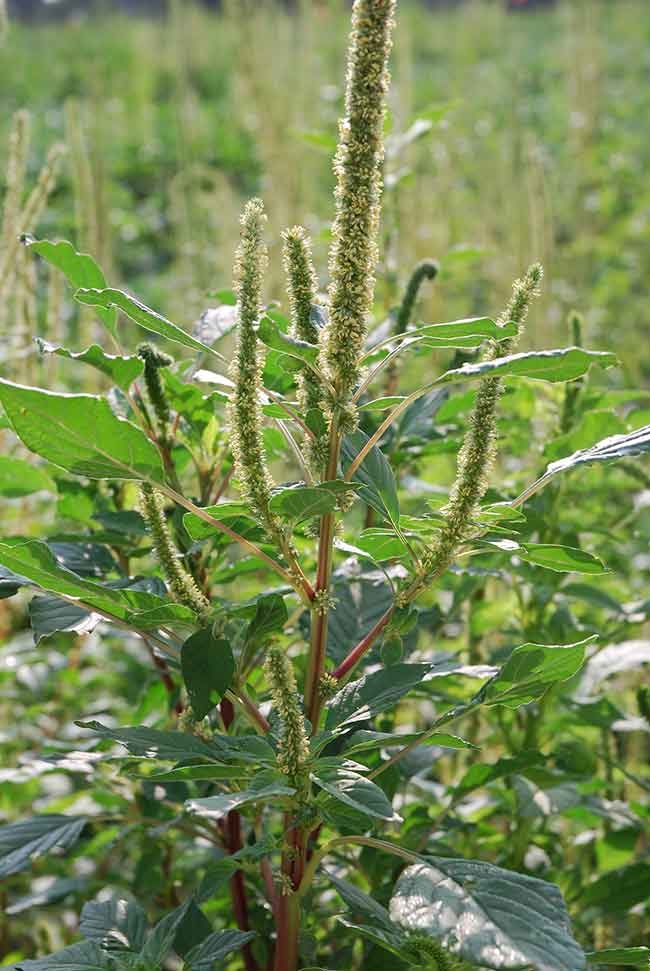