Yield loss due to kochia varies from 31 to 76 per cent when it emerges at the same time as sunflowers. Yield losses of up to 46 per cent occur when biennial wormwood emerges about the same time as sunflower. Those are pretty serious numbers found in research conducted by Robert Gulden, a professor in the department of plant science at the University of Manitoba, and his graduate student, Derek Lewis.

“I wasn’t really surprised to see losses that high, because when you run these types of trials that aim to establish thresholds you need a broad range of weed densities. At the high end, there is a lot of competition. And sunflower isn’t a very good competitor early on, so even at lower weed densities, we expected to see fairly large yield losses,” Gulden says.

Kochia and biennial wormwood are becoming increasingly troublesome weeds in sunflower crops. Agriculture and Agri-Food Canada’s (AAFC) Prairie weed surveys show that kochia has moved up in ranking from 24th in relative abundance in the 1970s to 10th in the last decade. In Manitoba’s sunflower fields, kochia has been identified as one of the top three weeds. Add on the confirmation of glyphosate-resistant kochia in Western Canada and kochia is a weed to be reckoned with.

Similarly, biennial wormwood is an increasing problem and has been identified as one of the 10 most important weeds in sunflower fields from Manitoba to Texas. Surveys in Manitoba found biennial wormwood in 1.1 per cent of fields and ranked it 43rd most prevalent. However, some areas of Manitoba, such as around Pilot Mound and Killarney, were found to have 11.1 and 13.6 per cent prevalence. Biennial wormwood tends to grow best in saturated soils and likes higher moisture conditions.

Gulden says little research has been conducted on yield loss from these two weeds in Manitoba’s sunflower fields. Two research studies, one on kochia from 2009 to 2011 and the other on biennial wormwood in 2010 and 2011, were conducted to assess these weeds’ impacts on sunflower growth and development, yield and seed quality. Weed density was also analyzed to determine the threshold density for herbicide weed control.

Kochia seed was broadcast on the soil surface at six densities of 0, 25, 125, 250, 500 and 1000 viable kochia seeds per square metre into sunflowers planted in 29.5 in. (75 cm) rows, either at the same time as the sunflower crop was planted (early weed seedling recruitment), or when the sunflowers were at the four-leaf stage (late weed seedling recruitment).

The good news is when kochia emerged after the four-leaf stage of the sunflower crop, no impact on sunflower growth and development, yield or seed quality was observed.

With biennial wormwood, emergence at about the same time as the sunflowers reduced yield by 34 to 46 per cent. Minimal effect was seen on sunflower growth and development, but sunflower achene size and individual achene weight were reduced, even when no effect on sunflower yield was observed, Gulden notes.

Action thresholds for weed control
Gulden says five per cent yield loss is often used by scientists as an average from which to determine a threshold when farmers target weed control. Based on the average weed-free yield at all sites for kochia (2565 lbs/ac; 2883 kg/ha), and a price of $0.25 per lb ($0.55/kg) for sunflowers, that five per cent yield loss would result in a loss of $32 per acre ($79/ha).

In the study, when kochia emerged at the same time as sunflower, the model generated in Manitoba found that a five per cent yield loss occurred with four kochia plants per square metre. By comparison, research done by Beverly Durgan of the University of Minnesota found when kochia seeds were planted only in the sunflower row, a density of six kochia plants reduced sunflower yield by 20 to 35 per cent with greater yield losses in drier years.

The action threshold for biennial wormwood was less clear. At Winnipeg in 2011, four plants per square metre was the action threshold for control. But at Melita in 2010 and Carman in 2011, it was about 40 plants per square metre. An action threshold could not be determined at the other two site-years. Gulden says that makes yield loss predictions difficult using wormwood densities alone, and other factors such as relative time of emergence between the crop and the weed, or environmental conditions, are also contributing heavily to the results of the competition between biennial wormwood and sunflower.

Relevance to other weed competition
Gulden says these two research studies highlight the need for good weed control in sunflower fields early in the growing season. He says kochia and biennial wormwood are not very competitive weeds at early leaf stages. Other weeds are of greater concern.

Research by Chubb and Friesen with AAFC at Morden, Man., in 1979 through 1981 found when wild oats were left to compete with sunflowers, yield losses ranged from 38 per cent when weeds were left in the seedrow to 54 per cent when weeds were not removed at all. In these trials, in which sunflower was seeded on 30-inch row spacing, they found wild oats growing between the rows competed just as vigorously as wild oats growing in the seedrow.

“Sunflower growers need to keep their fields clean, especially with competitive weeds like wild oats or wild mustard. They emerge early and are competitive so I would expect there would be greater yield losses than we saw with kochia or biennial wormwood, or similar losses at lower weed densities,” Gulden says. “The first four weeks are important until the sunflower starts to canopy, so growers should try to keep their fields pretty weed-free.”

Sunflower weed control
Weed control options are available in sunflower to help keep the crop relatively weed-free. However, the options are more limited when looking at kochia and biennial wormwood. For kochia, only Edge granular applied pre-emerge, and Authority (sulfentrazone) or Authority Charge (sulfentrazone and carfentrazone) are registered.

Authority is used pre-seed or pre-emerge (after seeding but prior to crop emergence), while Authority Charge (a pre-mix of Authority and Aim herbicides) is used pre-emerge. FMC recommends using Authority when applied alone or with glyphosate. Authority provides residual activity of kochia, redroot pigweed, lamb’s quarters, wild buckwheat and cleavers.

Both sulfentrazone and carfentrazone are Group 14 herbicides and provide control of Group 2, 4, 5, and 9 resistant weeds:

Edge granular (ethafluralin) is applied pre-emerge and controls a wide range of grassy and broadleaf weeds. It is a Group 3 herbicide, and similarly, can provide herbicide-resistant weed management.

Biennial wormwood is much more difficult to control. One plant can produce up to one million seeds so the goal is to keep the weed from producing seed. A publication from North Dakota State University, Biology and Management of Biennial Wormwood, provides an in-depth look at this weed, including herbicide control options. It indicates biennial wormwood has natural tolerance to many herbicide groups including ALS, dinitroanilines, HPPD inhibitors, PPO inhibitors and acetamides. Growth regulator type herbicides like bromoxynil, floyrxypyr and 2,4-D and clopyralid are not effective either.

In sunflower in the U.S., Spartan herbicide is registered and may control or reduce biennial wormwood infestations. The active ingredient in Spartan is sulfentrazone – the same as Authority in Canada. In Canada, biennial wormwood is not on the Authority label, and rates between the products differ somewhat. Labelled rates of Authority in Western Canada might provide some activity, but talk to your FMC Canada representative for further information. 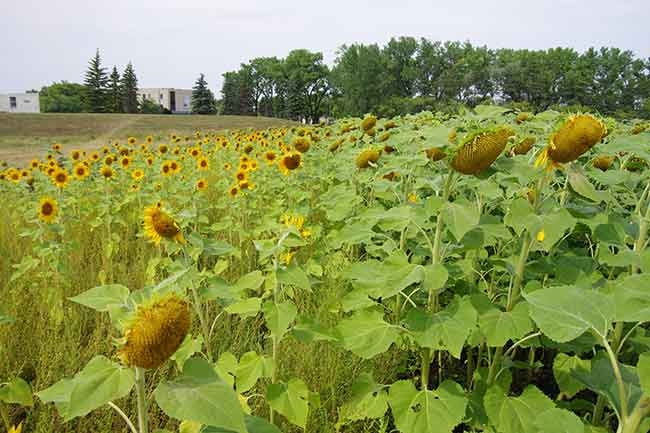