The Ontario government has been experimenting with growing quinoa (Chenopodium quinoa) and amaranth (Amaranths spp.), an ancient grain and a cereal that prefer moderate climates with lower humidity levels. While both “grains” are currently being imported from South America, a dramatic increase in demand, especially at the local level, has some growers considering the new specialty crops as a potential for their farms. Quinoa and amaranth are also both grown in the Canadian Prairies, but are they suitable crops for eastern Ontario farmers? Both a producer and an Ontario new crop specialist  think so. 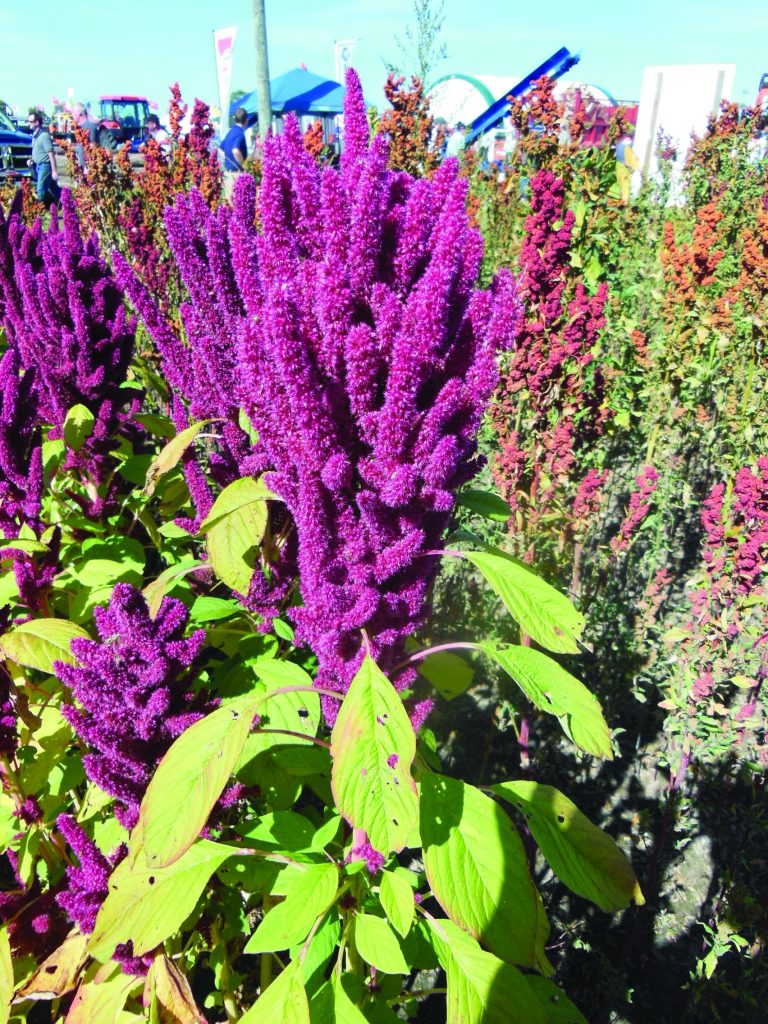 Grain amaranth is a cereal that prefers moderate climates with lower humidity levels. The Ontario government has been experimenting with growing quinoa (Chenopodium quinoa) and amaranth (Amaranths spp.)

Quinoa, considered to be one of the world’s superfoods, is not only gluten-free, but also high in antioxidants and essential nutrients. As a staple to those on gluten-free diets – a booming market that is projected to grow to $5 billion by 2015 – quinoa is so popular that supply can’t keep up with demand. In fact, on average, the market has grown 40 per cent annually. On top of that, prices for the grain have tripled in the past five to six years. Grain amaranth, although less popular, is sure to see a similar increase in demand, since it is also gluten-free, and high in protein and lysine, the latter of which is an essential amino acid.

In 2011, a partnership made possible by the Sand Plains Community Development Fund allowed the Ontario Soil and Crop Improvement Association, OMAFRA and Campbellville-based Katan Kitchens an opportunity to do a cultivar assessment of grain amaranth and quinoa. The goal of the assessment was to identify which varieties produced the highest yields under different circumstances. Yield parameters of three cultivars of grain amaranth (A. caudatus, A. cruentus, and A. hypochrondriacus) and five cultivars of quinoa (Brightest Brilliant, Dave#407, Faro, K’coito and Temuco) were evaluated in Norfolk County.

Between Oct. 7 and Oct. 18, 2011, the quinoa was harvested by hand (plot combines were unavailable). The grain amaranth plots were also harvested by hand on Nov. 3, 2011. Due to weed pressure, and time and labour restraints, only three reps from each trial were analyzed.

The results were mixed for a number of reasons, according to an OMAFRA report provided by new crop specialist Evan
Elford. For the cultivars that germinated, mature grain yields were obtained within the growing season, even though planting was delayed due to unfavourable weather conditions. The fact that crops were hand harvested, and the seeds cleaned by hand, likely had a negative impact on yields as well. Weed control was also a consideration: crops performed well where there was low weed pressure, but yields were lower where weed pressure was higher.
Of the three cultivars of grain amaranth tested, A. cruentus and A. hypochrondriacus both grew upright with a compact panicle seed head. A. caudatus, on the other hand, was not as consistent and its panicle head had long, drooping pedicels. A. hypochrondriacus was the highest-yielding cultivar and the only one that appeared to have a uniform-sized grain. Mean and maximum yields are shown in the table below.

Of the five cultivars of quinoa tested, Dave#407 and K’coito did not germinate. Faro was the first to mature and was harvested on Oct. 7. Brightest Brilliant and Temuco were harvested Oct. 17 and 18. Of the three, Brightest Brilliant and Faro had a larger grain size than Temuco. According to Elford, no statistically significant yield differences were observed, although Brightest Brilliant did obtain a higher yield than the other two cultivars. Elford also observed
significant differences in reps, which he attributed to weed pressure, since higher yields were obtained where weed controls had been used on a regular basis beforehand. The table below provides exact numbers for mean and maximum yields of each cultivar.

Last year, following the 2011 cultivar assessment, the same team chose two of the best varieties of each and ran another set of trials. Set up on five different one-acre sites across the province, each cultivar received randomized treatment with the hopes that statistical data could be collected. The five Ontario sites were located in Campbellville, Peterborough, Staffordville, Matheson and Cobden.

Jamie Draves, producer and owner of Katan Kitchens, is on the Campbellville site. He says that despite extensive weed pressure and drought-like conditions, both grain amaranth and quinoa have done very well on his farm.

“Where some corn crops and some soy crops are getting burnt up, this has still done well,” says Draves. “In future, with the climate extremes we’re seeing, these are crops that may be a little less risky than some of the other crops and more viable that way.”

The partnership is currently working on obtaining more funding so that they can move to the commercial stage as soon as possible. First, though, there are a number of issues that need to be worked on. The problem of weed pressure needs to be addressed, as well as concerns about processing. While amaranth doesn’t require as much work, quinoa has a natural pesticide on its surface, called saponin, which needs to be washed (or rubbed) off. To make the process more efficient and affordable, they’re looking at the creation of specialized equipment.

One of the biggest challenges they face is developing a market for the grains. “We’re building the value chain right now,” says Draves. “The amaranth is a little tougher, so I’m starting by assessing the competitors and then going from there. There are some big buyers in the U.S. that we’re forming relationships with – those that would prefer to go local.”

Quinoa, on the other hand, looks to be a promising market. Internationally, it’s currently grown and exported out of Bolivia, Ecuador and Peru.

“Their capacity to meet demand doesn’t look to be there. Right now, distributors are selling out almost right away,” says Draves. “It makes it very promising as a commercial crop that we’re pretty close to being there and being successful with it. We can probably go commercial and then fine-tune along the way.”