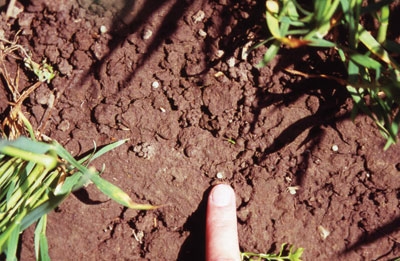 ESN controlled release fertilizer is a relatively new product to Eastern Ontario. It has really just become available to the growers in the last two years (since 2009). So we’re doing a trial to see if there’s a benefit to grain corn and spring wheat growers,” says Scott Banks, emerging crop specialist with the Ontario Ministry of Agriculture, Food and Rural Affairs.

ESN, or environmentally smart nitrogen, consists of urea granules with a very thin polymer coating. Soil moisture can move through the coating into the granule and dissolve the urea. As the soil warms, the urea solution moves faster through the coating out into the soil. The increasing soil temperature also prompts the crop plants to increase their growth rate, which increases their need for nitrogen. “So the idea is to have the nitrogen available more closely to the time when the crop needs it. That should either increase crop yield because of improved nitrogen usage, or decrease the rate of nitrogen that you need to apply,” explains Banks. From an environmental perspective, the concept is that the coating keeps the nitrogen under wraps until the crop is ready to use it, reducing the risk of nitrogen loss into the environment due to leaching, volatilization and denitrification.

ESN costs more than regular urea, so Banks’ project is assessing the economics of using ESN, including the effects of different rates on the yields of corn and wheat and on the protein content of wheat. He has completed two years of the project and hopes to do a third year in 2011. Funding support is being provided by the Ottawa Valley Seed Growers Association and the Ottawa-Rideau Regional Soil and Crop Improvement Association.

For the on-farm trials, the researchers are applying nitrogen at the grower’s usual rate of actual N and at half that rate. The half-rate treatments are aimed at determining whether it is possible to reduce nitrogen rates when using ESN. The small plot studies are more intensive, evaluating nitrogen rates of 0, 50, 100 and 150 pounds per acre for corn, and 0, 90 and 135 pounds per acre for wheat.

Some producers in other regions are using ESN as a way to apply higher rates of seed-placed nitrogen. However, most Eastern Ontario cereal growers use broadcast nitrogen, so the researchers are broadcasting the nitrogen for these trials.

Results so far
Some of the farm sites had a fair amount of field variability; for example, at one site, there was more than a 10-bushel difference in wheat yields between the replicates of the same treatment. That kind of variability can make it difficult to get statistically significant results. Still, the overall results from the on-farm field trials showed similar trends as the small plot trials.

“The bottom line is we didn’t really see any increase in yield with the ESN treatments for either the half rate or the full rate of nitrogen,” says Banks.

He notes, “We did see an increase of about 0.5 percent in protein in spring wheat. However there was no economical gain to adding that extra 0.5 percent because all the samples were over 14 percent protein in the standard check, with spring wheat, the grower gets paid a premium for protein up to 12.5 percent. Now some millers have said they might like higher protein wheat, so there is a potential that someday they may pay a premium for additional protein levels.”

In terms of residual nitrogen levels, the results for the soil samples analyzed so far indicate there is no difference between the straight urea and the ESN/urea blend treatments.

Banks expects to complete his analysis of the 2010 data fairly soon and plans to submit a report to Crop Advances 2010 with more detailed information.

He concludes, “To the grower, the bottom line is, does ESN pay? From the numbers that I have, the best-case scenario is maybe in a year you might break even on the difference, based on the yield and the price. For example, on corn at one site in 2010, we gained about 2.9 bushels with the ESN/urea blend. With the 2010 price of corn, that meant about an extra $5 per acre. But from a statistical standpoint, there was no difference in the treatments,” says Banks. “So it’s not one of those situations where we can say we’ve got something great that you can do. But we need to test these things to see if they work or not, especially when it involves an extra cost, you want to make sure you have a payback.”