One of the first questions farmers ask every spring is whether or not they should split their nitrogen (N) application. This is a very legitimate question, as we have to weigh out the pros and cons of splitting our N application versus adding the entire amount of N in one application at the beginning of the season. Adding all N early in the season, when the crop does not need a whole lot, will mean losing some of that N to leaching and denitrification. 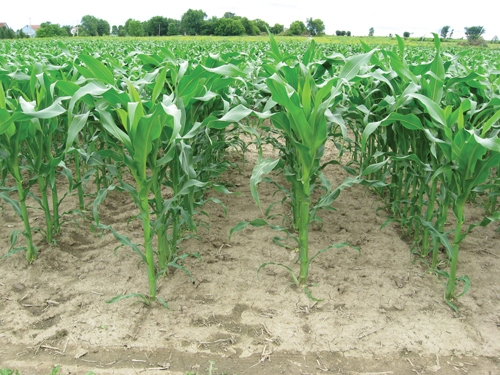 Wheat treated with ESN. One of the first questions farmers ask every spring is whether or not they should split their nitrogen (N) application. This is a very legitimate question

Splitting the N application on wheat and corn has historically shown a small yield advantage over a one-time application at planting. However, this yield advantage is usually offset by the cost of the extra pass and the trampling effect on the crop from the additional application.

Environmentally Smart Nitrogen (ESN) was developed in an effort to supply N to the crop at the right time while minimizing the number of passes on the field. ESN consists of a urea granule provided with a semi-permeable polymer coating that allows water to enter the granule and dissolve the nitrogen inside based on temperature and moisture, providing a slow release of nitrogen. This extra layer reduces the overall N concentration in the product to 44 percent, as opposed to 46 percent for urea.

To evaluate the advantages of ESN versus straight urea, Grain Farmers of Ontario is funding a research project at the University of Guelph’s Kemptville Campus assessing different combinations and application rates of the two fertilizer products on spring wheat and corn. The experiment was started in 2011 on a clay-loam soil in
Winchester, eastern Ontario.

Spring wheat
Ten N treatments were applied to spring wheat at planting in early May. The treatments totaled 0, 45, 90 or 135 kg N per ha. Each of the rates was applied as straight urea, straight ESN or 50/50 blend of both. A straight ESN application at 135 kg N/ha tended to depress plant height as opposed to a straight urea application. Within the same N rate, ESN did not increase yields or any of the other parameters monitored. The highest yield was recorded for the straight urea treatment with 135 kg N/ha, which topped 4.73 tonne/ha, while straight ESN at 135 kg N/ha produced 4.56 tonne/ha. However, the main effect of ESN was observed on protein content. The highest N treatment with 100 percent ESN pushed grain protein content above the 14 percent bar, although this increase was not statistically different from urea or urea/ESN combinations at the same N rate, but statistically higher than the other treatments with lower total N applications. These preliminary results show that replacing urea partially or completely by ESN does not improve spring wheat yields. However, the slow release of ESN is having a beneficial effect on protein content, through providing N later in the season.
The project results for spring wheat show that ESN did not significantly increase yields compared to urea. Similarly, plant height and thousand kernel weight were not affected by the ESN. On the other hand, 100 percent ESN treatments tended to decrease yields as opposed to 100 percent urea or combinations of the two sources. Protein content tended to increase with the application of ESN on the clay loam soil in Winchester.

Corn
Given the differences in growing season and fertilizer requirements, the treatments for corn were different than those for spring wheat. The ten treatments totaled 0, 50, 100 or 150 kg N per ha. Each of the rates was applied as straight urea or urea-ESN blends (60/40 or 75/25). All N treatments were applied at planting. Corn hybrid N23F-3000GT was planted at 35,000 seeds/acre and 30” row spacing.

At a rate of 150 kg/ha, a urea-ESN blend had a yield advantage of 11-12 percent (17-19 bu/ac) compared to straight urea. Corn yield did not benefit from the highest urea application (150 kg/ha) as to 100 kg/ha. On the other hand, blending ESN with urea at a total rate of 50 kg ha-1 did not affect yields compared to straight urea.
Corn grain test weight was not significantly affected by the different fertilizer levels or sources. The N source did not affect corn kernel weight or harvest moisture content.

Our results for corn show that including ESN with urea at 150 kg N ha-1 increased yield by 11-12 percent. A urea-ESN blend at a ratio of 60/40 was the most profitable as it would increase farmer profit by over $200 per hectare. Corn grain moisture at harvest and test weight were not affected by the amount or source of nitrogen.

Fertilizer cost-benefit analysis of ESN and urea applications
Fertilizer nitrogen costs and yields per treatment were computed using an average price for a bushel of corn at $6 (average price for the first half of 2012). Urea and ESN prices used were $750 and $900 per tonne, respectively. No other costs were included in the analysis, as these will be fixed for the different treatments.

The economic analysis shows that treatment with 150 kg N/ha at 75 percent urea and 25 percent ESN was the most profitable. This treatment would increase the per hectare profit by $267. As agricultural commodity prices soar, each bushel of yield increase will be important.

These results shed some light on the effects of ESN and explain some of the contradictory results from Ontario and
other jurisdictions. Using ESN in blends with urea will be more profitable for farmers on corn than on spring wheat. The environmental effects of ESN application and nitrogen use efficiency still need to be evaluated. More trials are underway to validate these results and to test these treatments on sandy loam soil.