Features Agronomy Other Crops
Take another look at fababeans

Every farmer knows that rotation is key to long-term pest management and field health. But, the four-year rotation ideal often clashes with production reality. While hot, dry conditions are ideal for successfully producing legumes, farmers have little choice in legumes beyond peas in the cooler, moister parts of the Prairies. That said, high disease pressure, poor standability and challenges with harvestability can make growing peas so frustrating that many producers are opting out of legumes entirely. Until now. Re-enter the fababean, albeit a new and improved version thereof. This cool-weather, high-moisture-loving legume offers ease of production, high yields and good marketability, key traits that helped generate significantly increased producer interest in 2013.

“In 2013, faba tripled or possibly quadrupled their acreage in Alberta over the year before. We were somewhere in the range of 25,000 acres, maybe as high as 30,000 acres in 2013, up from 6,000 acres in 2012 and 4,000 acres in 2010 and 2011. It’s still not a huge acreage overall, but the interest is growing very, very quickly,” says Robyne Bowness, pulse research and extension agronomist with Alberta Agriculture and Rural Development (ARD).

“The producers who grew them were extremely pleased and from what I’ve heard, are definitely planning to grow them again. I see faba doubling again in 2014 in Alberta, there is that much interest. Right now, if you’re trying to find seed to grow them, you’re out of luck because the seed was sold out by November.”

The central and eastern Prairies have far fewer cool, moist acres than Alberta, so it is not surprising that faba acreage decreases as one moves eastward. Best estimates suggest approximately 8,000 acres of fababean were planted in 2013 in Saskatchewan, and just 2,500 acres were planted in Manitoba.

“The interest level increased (in 2013) in the Black soil zone in Saskatchewan because of the difficulty wet years have had on dry pea production. Fababean is definitely better suited for wet conditions than pea,” says Dale Risula, a provincial specialist with the crops and irrigation branch of Saskatchewan’s Ministry of Agriculture.

Interest in Manitoba is, understandably, far lower because the province offers excellent soybean growing conditions. Still, there is increasing interest for the coming year, reports Kristen Podolsky, a production specialist with the Manitoba Pulse Growers Association.

“Seed growers are reporting more seed inquiries and sales for 2014 with market interest from multiple buyers. We may exceed the five-year average of 3,400 acres,” she says. “Fababeans are still a very small crop in Manitoba, but they are a good choice for crop diversification and soil health, and are well suited for higher-moisture areas.”

Approximately 20 per cent of fababean grown on the Canadian prairies in 2013 was a new variety called Malik, a brown seed coated, larger bean containing tannins. These faba are marketed strictly for human consumption, largely to the Egyptian market that considers fababean a staple.

The other 80 per cent of fababean grown in 2013 was a variety called Snowbird, a white seed coated bean with low tannins. Though it was traditionally marketed as livestock feed, there is increasing interest in Snowbird fababean for human consumption as well.

“There is certainly growing potential for fababean, especially faba with low tannins, in the domestic market. Pulses in general are starting to gain some ground domestically because even if you’re gluten free or vegetarian, you can eat pulses. Fractioning is growing too, whereby a product is separated into protein, fibre and starch components for food additives. Instead of using a corn starch, it is absolutely possible for a food manufacturer to use fababean starch,” says Bowness.

While the 10-year yield average is only about 40 bushels per acre, the new varieties, combined with growing interest from highly skilled, top producers, is pushing yields significantly higher. “We consider 50 bushels a pretty good crop, but producers aren’t happy with that – they know 60, 70, 80 bushels are possible. This last year, producers in the Barrhead-Westlock area were getting 50-ish bushels per acre; guys in Edmonton were getting 70; some were getting as high as 100,” says Bowness. With prices last fall averaging $7 and spring-contracted bushels bringing in $8, returns are as good as or better than peas, with far fewer production headaches.

That said, “much of the market is relatively new in development,” says Risula. “It’s believed the market gets filled pretty quickly through contracts, and anything grown outside of that is subject to extremely reduced pricing.”

From a production standpoint, fababean are extremely kind to producers. Currently, there are no major disease issues that affect Canadian fababean with the exception of chocolate spot in some areas, mostly areas under irrigation in southern Alberta. They stand tall and do not lodge, making them simple to straight cut at harvest. The hollow stem means residue management is negligible. And, best of all pulses at nitrogen fixing, fababeans leave the soil in excellent condition.

“On a cost comparative basis, fababean are cheap to grow, they are excellent competitors, and the money you get out is very good,” says Bowness.

Traditionally, fababean have been a very long-season crop, risky due to Alberta’s fairly low number of frost-free days. Today, newer cultivars like Malik have decreased the necessary season, making successful harvest more attainable. The most important key to growing fababean remains early seeding: ideally, seed should be in the ground by May 7 though no later than May 15. Somewhat surprisingly, faba can grow very successfully, even in more northern areas like Alberta’s Peace Region where the shorter number of frost-free days is offset by the slightly longer length of day.

Once faba are in the ground, they require less than ideal conditions in order to realize optimum yield. The fact that growing conditions were a bit too good actually limited yield in certain fields in 2013, says Bowness.

“They need a bit of stress, a kick in the butt, to move their nutrients and assimilates from growing vegetatively to forming pods. We saw some fields grow huge biomass that didn’t have the necessary stress trigger to set pods, so the yield was on the low side. That said, for the most part we had fantastic growing conditions in Alberta and producers were really pleased.”

While fababean production in Saskatchewan and Manitoba will likely remain relatively low in the coming years, expect
another year of enthusiastic growth for faba in central and northern Alberta. In these areas, producers who did not buy seed in time this past fall are likely to look on with envy at their fababean-growing neighbours. 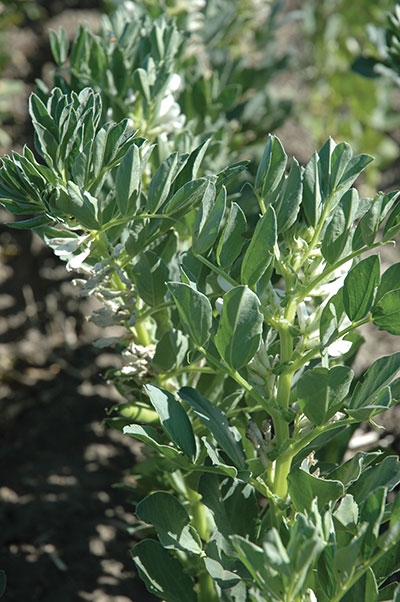 Cool-weather Every farmer knows that rotation is key to long-term pest management and field health. But