The fababean crop has been growing in popularity in Western Canada. In Saskatchewan in particular, it is promoted as the pulse to grow in the northern and eastern areas of the province that are not ideal for lentils or chickpeas. However, while export markets are currently limited for Western Canada’s fababeans, a recent study looking at potential markets the crop reveals opportunities closer to home that producers can tap into. 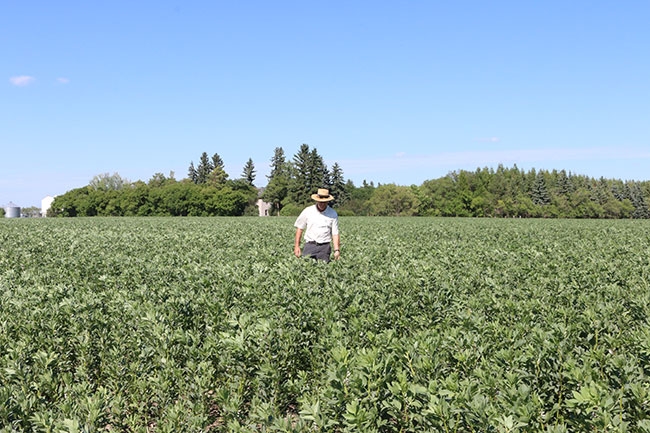 John Heard The fababean crop has been growing in popularity in Western Canada.

The study was conducted by Joe Feyertag, Julian McGill and Willa Finlay from LMC International, an independent economic and business consulting company for the agribusiness sector, and was commissioned by the Saskatchewan Pulse Growers in 2016. Its overall goal was to understand the production and end-use of Canadian fababeans and identify which sectors present the best opportunities for future growth.

Limited export opportunities
Export opportunities are limited because there is only one major buyer of fababean in the world – Egypt, which accounts for 71 per cent of global imports. The other countries produce sufficient crops to meet their own demands.

While Canadian producers can produce the varieties of fababeans the Egyptian market prefers – namely medium- to large-size seeds that are high in tannin – insect damage can impact the aesthetics of the fababeans, making them less attractive to buyers. Canada also has a short export window due to storing difficulties and European producers’ need to recoup their costs.

There is also strong competition from Australia since they produce large, high-tannin varieties that have no problems with insect damage. Plus, Australia and other European countries have a freight advantage.

“The higher value food grade market in Egypt is a difficult market for Canadian fababeans to compete for the higher value, as we tend to have lower quality and are new to this competitive market,” says Sherrilyn Phelps, Saskatchewan Pulse Grower’s agronomy manager. “Australia and France are the main players currently and unless they have production issues limiting supply or quality, Canadian fabas just can’t compete for large part of the market.”

“The risks associated with one country as a focus market and that country being a bit unstable from an economic point of view adds other risks.”

Best potential
The study identified the domestic livestock feed market as the largest market for Canadian-grown fabas at this time. Phelps says the low-tannin varieties are the ones producers prefer to grow because of their smaller seed size – making seeding easier.

“We have seen an increase in the use of fabas into this market since the study was done which supports their conclusion,” Phelps says. “Other markets that fabas can target for the future include pet food, fish food and for protein fractionation. These are longer term in scope but there has been further interest in these areas.”

Feyertag agrees protein fractionation is a big opportunity. Unfortunately, there are some issues to overcome. One is its bad reputation because of favism, a genetic disorder that gets its name because it is triggered in certain susceptible individuals through consumption of fababeans. Another challenge is the lack of an end use for the fababean starch once the bean is fractionated.

“The starch from peas has an end use in noodle products, especially in China,” Feyertag says, explaining fababeans have a high percentage of protein, lysine and starch. “Feed them to the animal directly, it has value because animals need that energy. When you fractionate, you can isolate the protein, but what do you do with the starch?”

This is why the livestock feed option is a good one right now.

“Livestock producers are interested in using local ingredients rather than importing cheap GM soybean,” Feyertag says. “But for that to happen with livestock feed, they need volume. Right now, production is too small to replace the vast quantities required in animal feed.”

Advice for producers
Phelps says the results provide producers with a better understanding of the marketing options for the different types of fababeans.

“The food-grade, large-seeded fabas can offer a premium but are riskier as the markets are smaller and very competitive, so we recommend growing them only under contract,” she says. “The largest market for livestock feed prefers the low-tannin types. The livestock industry, such as the hog barns, are starting to utilize fabas as they do have higher protein content than peas and are cheaper than soybean meal.”

The challenge for producers is producing a consistent supply of fababeans if they want to see the feed industry change feed rations and see the value in using the fababean crop.

“Growers can grow the fabas as we have a lot of the agronomy figured out; however, they want a decent price to make it economical to grow,” Phelps says. “The livestock feed industry wants it and is starting to recognize the value but wants it as cheap as possible and with consistent supply.”

Producers are seeing some decent pricing being offered for the low-tannin fababeans, but prices are still lower than for peas. This means producers need higher yields to make it worthwhile to grow the crop.

“When compared on protein basis, fababean is the cheapest source of feed at the moment,” Feyertag says. “Livestock producers should use them but they are priced lower because they are not as popular.”

He adds that fababean producers can’t hold onto the product because they aren’t getting a high enough price. “It will take a couple of years to grow the market,” he says. “We see it going in that direction as year after year farmers increase their acreage.”

Variety choice is key to producers looking at capitalizing on the fababean market right now. Large-seeded, tannin varieties such as FB9-4 are well suited for the food grade markets but are not preferred by feed industry due to high tannins in the seed coat and the need for processing prior to feeding. On the other hand, the small-seeded, low-tannin types such as Snowbird and Snowdrop are well adapted for the livestock industry.