With several years of production under his belt, Greg Stamp, production manager with Stamp’s Select Seeds at Enchant, Alberta, is just as excited about fababean potential as he was in the past. With yields in the 75 to 100 bushel per acre range under irrigation and a target of $9 per bushel, Stamp says the crop provides high net returns under irrigation. Dryland yields are around 40 to 45 bushels per acre in moist, cool areas of the Prairies.

“The net returns under irrigation are about $50 to $1000 per acre more than a wheat crop under irrigation,” notes Stamp. “I always figure that the input costs are a wash between the crops.”

Stamp has grown a few different varieties of fababeans over the years. Snowbird zero-tannin fababeans were developed as a feed option for pig diets to replace field pea or soybeans in the ration. Snowbird has less than one percent tannins and an average 28 percent crude protein compared to 25 percent in field pea. Tannins are bitter-tasting compounds, and removing them makes fababeans palatable.

For the last several years, Stamp has also grown two tannin varieties: Malik (formerly FB 9-4) and FB 18-20. These varieties are grown under Identity Preserved (IP) contracts through Saskcan Pulse Trading at Regina, Saskatchewan. The varieties are grown for export contracts where the buyers prefer large-seeded fababeans with a size up to 650 grams/1000 seeds. These markets are mainly for human consumption in the Mediterranean and Middle East regions or Mediterranean ethnic markets of North America.

Stamp has grown fababeans on both irrigated and dryland fields. In his area, moisture is a bit limited for dryland production. He says fababeans seem to like more moisture than pea crops. That requirement means growing fababeans under irrigation, or further north in the Parkland area. He says fababeans are photosensitive: when daylight hours begin to shorten, the plant stops vegetative growth and switches to seed production. Maturity is in the 110- to 130-day range.

“If you can grow wheat, you will have enough growing season to grow fababeans,” explains Stamp. “Fababeans have been grown in the Peace region, at Edmonton, and in many other areas on the Prairies.”

Grow them like peas
If you have grown peas, you can grow fababeans. The crop is quite tolerant to frost, so it can be planted in the early spring – for Stamp’s area, his 2012 crop went in around April 10.

Fababeans don’t need nitrogen (N) fertilizer, but they do require inoculation with a fababeans-specific rhizobia inoculant. Stamp says fababeans fix 75 pounds per acre of N and release another 10 pounds or more the following year. To get the most out of the nitrogen-fixing ability of fababeans, they should be planted into stubble fields that are low in N fertility – cereal stubble would be perfect. Avoid fields that have been recently manured and are high in N fertility.

Caution in field choice must also be used to ensure cereal herbicides do not leave herbicide carryover in the soil that would impact fababean germination. Check herbicide labels for rotational considerations.

Stamp targets four plants per square foot and seeds one to two inches deep. The larger seed size of the fababean varieties presents some challenges at seeding. For his 2012 crop, he used a Salford planter with 7.5-inch row spacing. He has seen other farmers use box drills, air seeders and Monosem vacuum planters.

“Because of the large seed size, you have to watch the volume of seed going through seed rollers and air distribution systems,” cautions Stamp.

Fertility programs call for adequate phosphorus and sulphur. Stamp puts down 50 pounds of 11-52-0 as a starter fertilizer in the seedrow. That is the maximum seedrow phosphorus (P) starter fertilizer when using narrow openers. He doesn’t apply sulphur (S), as his irrigation water is high in S, but, he says, sulphur may be required in dryland situations, especially on Black and Grey Wooded soils. “Treat fertility like you would a pea crop.”

Fababean is a poor competitor with weeds at the seedling stage but a good competitor later on in the growing season.

Basagran, Basagran Forte, Edge, Sencor, Poast Ultra and trifluralin products are registered on fababeans. A preseed burndown of glyphosate will help control winter annuals and early emerging weeds. Stamp typically uses a fall or spring Edge application for weed control. Fababean can be treated with a preharvest application of glyphosate to clean up perennial weeds for the following crop.

In 2012, Stamp experienced his first brush with disease. Chocolate spot, caused by Botrytis fabae and Botrytis cinerea, knocked what Stamp thought was a 100-bushel crop back to 75 bushels per acre. “I’m going to pencil in a fungicide application for 2013,” says Stamp.

Fababean grows upright, with the bottom pods four to six inches above the ground. Swathing will help prevent shattering losses, but set up the potential for seed staining – a concern in the large-seeded human consumption markets. They may be straight combined, with some risk of seed shatter.

“Fababeans are very easy to harvest with the lowest pods well off the ground,” notes Stamp. “We have straight cut them without any problems. We usually let the crops dry down naturally here in the south.”

Stamp likes the potential for fababeans. With net returns $50 to $100 per acre more than wheat and better harvestability than pea, he will likely keep expanding his fababeans acres. 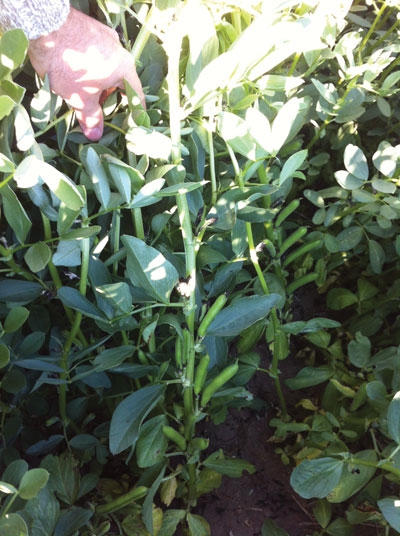 Fababeans are good weed competitors once established. Fababeans yield in the 75 to 100 bushel per acre range under irrigation
Print this page