The first case of herbicide resistance in Western Canada was identified in 1988, and the problem has increased continually since then. Herbicide-resistant weeds currently affect millions of acres of Prairie farmland. Impacts on growers can include fewer herbicide options, higher weed control costs and reduced crop yields.

It’s crucial for growers to act now, before the problem gets any worse. Fortunately, advances in technology and knowledge can help crop growers fight resistance.

“The herbicide resistance problem on the Prairies is not as far along as it is in some other areas, like Australia and the southern U.S., and we’re at a time when we can prevent ourselves from getting there,” says Dr. Neil Harker, a weed scientist with Agriculture and Agri-Food Canada (AAFC).

Herbicides are grouped based on their mode of action. For example, Group 2 includes many different active ingredients, but they all control weeds by blocking the normal function of acetolactate synthase (ALS), an enzyme important in the production of certain amino acids. Group 9 includes only one active ingredient, glyphosate, which inhibits the EPSPS enzyme. So far on the Prairies, 19 weed species are known to have Group 2-resistant biotypes, and one species, kochia, is known to have Group 9 resistance. Resistance to Groups 1, 3, 4, 5, 8 and 25 has also been found on the Prairies, and some biotypes of certain weed species, such as wild oat and kochia, have resistance to multiple herbicide groups.

Along with the loss of herbicide options due to resistant weeds, it’s possible that some existing herbicide options may be deregistered in the future. In December 2013, Canada’s Pest Management Regulatory Agency (PMRA) announced that it would review 23 registered pest control products, including some common herbicides such as 2,4-D and trifluralin. This review is required under Canadian legislation because one or more member countries of the Organization for Economic Co-operation and Development prohibit the use of these active ingredients for health or environmental reasons. If the review finds reasonable grounds for believing that a product endangers human health or the environment, then PMRA may cancel or amend the product’s registration.

The potential to lose some of these older herbicides is a worry for Beckie. “Given the lack of new modes of action in the pipeline, we really can’t afford to lose any herbicides if they can help to manage herbicide-resistant weeds,” he says. “For example, trifluralin has been a stalwart herbicide in terms of managing resistance in Australia. It’s an old Group 3 herbicide and if we lost it, it might have significant repercussions for being able to manage resistance.”

Indeed, strategies such as identifying herbicide alternatives to control resistant weeds, applying multiple modes of action and breeding crop cultivars with improved herbicide tolerance are crucial. To that end, Eric Johnson, a weed biologist with AAFC, has been leading studies to evaluate some fairly recent active ingredients in Group 14 and Group 15 for controlling Group 2-resistant weeds and to develop data needed for minor use registrations.

“Group 2 resistance is the most prevalent resistance in Western Canada right now. Pulse crops are quite reliant on Group 2 products, so we are looking for alternative herbicides,” Johnson explains. He has been focusing on products that could possibly be tank mixed with a Group 2 herbicide, “because we know that tank mixes of different herbicide groups are one of the best options for delaying herbicide resistance.”

This research has shown that the Group 14 herbicide sulfentrazone (Authority) works well on a number of Group 2-resistant weeds, such as kochia, wild buckwheat, lamb’s-quarters and, in some soils, cleavers. Chickpea, pea, flax and sunflower are tolerant of sulfentrazone, so the product is now registered in all those crops. The researchers are also trying to develop safe rates to at least suppress kochia in tame mustard. As well, although lentil is currently quite sensitive to sulfentrazone, University of Saskatchewan breeders are working to improve its tolerance.

Another example is fluthiacet-methyl (Cadet), a post-emergence Group 14 product. Johnson is finding that it looks promising as a tank mix partner with a product like imazamox (Solo) to control Group 2-resistant weeds like wild mustard and kochia in lentil, although the researchers are still working to find the optimal rate and timing.

In Group 15, Johnson has been assessing pyroxasulfone (called Focus in Eastern Canada), a soil-applied herbicide. “It has some broadleaf activity, but we’re mainly focusing on possibly controlling grassy weeds as an alternative mode of action for things like Group 1- and 2-resistant wild oats.” Wheat and peas are very tolerant of pyroxasulfone, and lentil has fairly good tolerance.

Johnson notes, “I think we’ll probably see more herbicides available within Group 14 and perhaps in Group 27. Again, Group 27 is another mode of action [active ingredient pyrasulfotole], so that would help in dealing with resistant weeds.”

In addition, Johnson says researchers in Australia and also at the University of Saskatchewan are working to improve the tolerance of lentil to metribuzin (Sencor, Group 5). “Improved tolerance would allow application of higher rates of Sencor for better control of weeds like kochia in lentil. That would be positive because we don’t have much Group 5 resistance in Western Canada.”

Reducing herbicide selection pressure
Harker and his colleagues have been evaluating various cropping options to control weeds, and they’ve found some that are quite effective. “Some of the best non-chemical options are growing perennial forages [and winter cereals so the rotation isn’t always favouring weeds that do well in spring-seeded annual crops] or growing early-cut silage so you can chop the silage before the weed seeds are viable. Another effective option is to use higher-than-normal seeding rates, so you prevent weeds from growing in the crop canopy.”

AAFC researchers are also starting to assess non-chemical options for harvest weed seed control. Harker says, “Rather than rewarding our most successful weeds for getting through the crop season by spreading them all over the field with the combine, we are looking at ways of taking the chaff, which has most of the weed seeds, and trying to bale it, remove it or kill the weed seeds with the Harrington Seed Destructor.” These types of approaches are already being used successfully to deal with very serious herbicide resistance issues in Australia.

Beckie is leading a study to evaluate the use of the Harrington Seed Destructor. This machine crushes weed seeds that come out of the combine with the chaff. The researchers will be testing it on the Prairies in 2015. In 2014, they started assessing which Prairie weed species would be good candidates for the Destructor; for instance, the weeds would need to retain their seeds during harvest and their seeds would have to be high enough on the plant to go through the combine.

Tillage is sometimes dismissed as a weed control option these days, but Beckie says, “Tillage is one of the pillars of integrated weed management. Whether it’s vertical tillage or new tillage technology that conserves soil while helping with weed management, it should be part of a grower’s toolbox.”

Johnson’s research shows min-till rotary hoes could help in dealing with resistant weeds. These hoes can maintain most of the crop residue cover while providing some incorporation of the soil-applied Group 3 herbicides like ethalfluralin (Edge), which improves the herbicide’s activity. The spoons on the hoes are able to remove very small weeds in cereal and pulse crops without damaging crop, so they are good for controlling weed escapes in-crop.

Other research has shown that rotary hoes can be integrated with high seeding rates and low herbicide rates to provide effective control of Group 2-resistant wild mustard in lentils. “I wouldn’t advise farmers to start buying rotary hoes,” notes Johnson. “This work is to develop alternatives for growers if we run into situations where there are very few options for controlling herbicide-resistant weeds.”

Tips for growers
For tackling herbicide resistance, Beckie’s first recommendation is to use less glyphosate. His second piece of advice is: “Spray a herbicide only when you need to. Having a few weeds in your fields and feeling that you have to control them is what has got us into the problem.”

Scout right after seeding and before spraying to determine the weed species spectrum and populations in order to decide whether or not to spray. Then scout again after spraying to assess the herbicide’s performance and look for resistant weeds.

Johnson recommends that growers combine many weed management techniques. “Look at increasing plant populations, diversifying your crop rotation, integrating mechanical methods and herbicides, and so on to reduce the herbicide selection pressure.” He also suggests growers consider alternatives to chemfallow, like partial cover crops or even using tillage.

Harker emphasizes the value of diversified crop rotations, although he is not optimistic that most growers will adopt this practice. “Until growers are willing to take a bit of a hit on short-term profits and get more cropping diversity with perennial forages and winter cereals – crops that may not be as profitable as canola-wheat or continuous canola – we’re going to have not only weed resistance problems but also insect and disease resistance issues.” 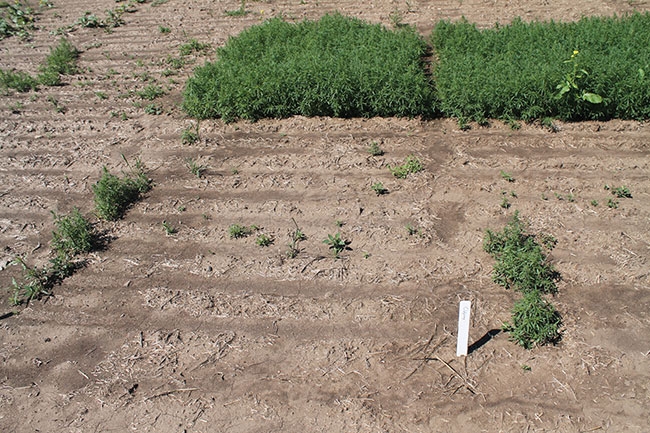