The cleavers weed challenge continues to be a particularly sticky issue on soils with greater than six per cent organic matter. Cleavers are widespread in the Black soil zone, and a growing Group 2 resistance problem is particularly challenging for pea growers.

Traditionally, cleavers were easily controlled in peas with Pursuit (imazethapyr, Group 2) or Odyssey (imazamox + imazethapyr, both Group 2). However, these old standbys are becoming less useful, as the incidence of Group 2 resistant cleavers grows. In addition, past weed surveys show that cleavers are increasing in abundance at the fastest rate of all weeds, further compounding the problem.

“Pursuit and Odyssey provided pretty good control in peas, but when you look at the options left for growers in the Black soil zone with organic matter greater than six per cent, there are only a couple of herbicides registered that will provide suppression of Group 2 resistant cleavers,” says Ken Sapsford, research assistant at the University of Saskatchewan.

The herbicides Basagran (bentazon, Group 6), Edge (ethafluralin, Group 3) and Viper (imazamox + bentazon, Group 2 + 6) are registered for suppression of cleavers on soils with organic matter (OM) greater than six per cent. Suppression is rated as weed control between 70 and 80 per cent. To be registered for commercially acceptable control, a herbicide must provide greater than 80 per cent control.

With support from the Saskatchewan Pulse Growers, Agriculture and Agri-Food Canada and FMC Canada, Sapsford investigated additional options for cleaver control on high OM soils. He looked at three herbicides that had potential for cleaver control: Authority, Heat and Command. Recognizing that none of the existing or potential herbicides could provide commercial control on their own, he assessed sequential applications of the three potential herbicides with the three existing herbicides registered for suppression: Basagran, Edge and Viper.

Heat herbicide (saflufenacil, Group 14) is registered on field pea, and will control cleavers that are present at time of application, but is not registered for residual control in crop.

Command herbicide (clomazone, Group 13) has some activity on cleavers when used preplant and may be safe on pea. However, Command is not registered for cleaver control, and is only registered in Eastern Canada for use on sweet potatoes, soybeans and cucurbits.

Sapsford explains that residual activity is an important feature for cleaver control since cleavers grow as both a winter and spring annual, and also has several flushes throughout the spring. A preseed burndown of winter annuals is important, but ideally, the products should have residual control to control multiple flushes throughout the spring.

“For control of cleavers in the Black soil zone, you want residual control,” says Sapsford.

Sapsford first assessed cleaver control of Authority, Heat and Command individually. Authority achieved suppression of cleavers at twice the registered maximum rate, but with variability ranging from 50 to 100 per cent.

Command applied pre-emerge at the low, medium or high rate provided very little control of cleavers. While the cleavers showed signs of injury early in the growing season, with reduced growth and a whitened appearance, by the July assessment timing, Sapsford says there was “virtually no control of cleavers, and the cleavers were re-growing.”

Authority herbicide applied pre-emerge provided some residual control of cleavers but still not enough to be rated as suppression when applied alone.

Of the registered herbicides, Edge provided control of cleavers early in the growing season, but Sapsford says end-of-season ratings in July found only 60 per cent control. Viper provided suppression of cleavers, as supported by the label.

Sapsford trialled two rates of Basagran. The regular registered rate, and the rate of Basagran that is included in Viper herbicide, which is roughly 40 per cent of the full Basagran rate. Both rates of Basagran provided suppression of cleavers. The cut rate of Basagran was included so that Sapsford could assess whether Viper was controlling both Group 2-resistant and no-resistant cleaver biotypes. He realized pea growers would most likely use Viper rather than Basagran, because Viper has a wider range of weed control.

Where things started to get interesting is when Sapsford started to experiment with sequential applications of two herbicides. He found the combination of pre- and post-emergent herbicides quite often provided control upwards of 100 per cent when rated at mid to late July. The combination of residual and contact herbicides helped to control the cleavers throughout the season, which helped to reduce seed set. By using a combination of multiple groups of herbicides, Sapsford says pea growers can also help prevent and manage Group 2 herbicide resistant cleavers in the Black soil zone.

“Most burnoff applications will also include a glyphosate (Group 9) application, so a pea field would be receiving at least three modes of action. That can help manage or delay Group 2 cleaver resistance,” he says.

Sapsford had success with the following sequential herbicide applications for Group 2 resistant cleavers on soils with greater than six per cent OM (see Table 1):

The different herbicide options provide growers with choices to fit their farming and crop rotational practices. Edge would fit for growers who utilize tillage in their farming practices. Heat, Authority and Viper fit with reduced and no-till applications.

“Growers are starting to look at fall-applied Edge with heavy harrow incorporation. That’s not on the label, but if they have time in the fall, some are starting to try Edge because of resistance management problems,” says Sapsford.

Heat, Authority and Viper, though, have recropping restrictions, which growers must consider. The major crops, including wheat, barley, oats and canola, can be grown the year after Heat and Viper applications. Authority has a recropping interval of 12 months for canola and 24 months for lentils. In the Black soil zone, this should not cause a problem, as wheat typically follows pea crops in rotation, and lentils aren’t grown in the Black soils.

“The one application that fits into many cropping plans is a spring application of Authority with glyphosate followed up with
Viper in-crop. It was providing excellent control, and with Viper controlling both grassy and broadleaf weeds, it picks up what Authority misses in the preseed application,” says Sapsford.

Viper following Heat also provided better than 90 per cent control. Sapsford says the research may help growers in the Black soil zone move pea cropping back into the rotation. 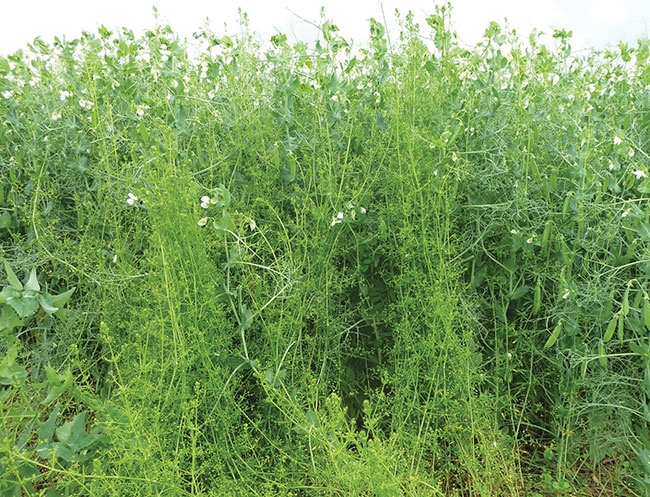 Group 2 resistant cleavers are challenging pea growers in the Black soil zone. The cleavers weed challenge continues to be a particularly sticky issue on soils with greater than six per cent organic matter.
Print this page