Northern corn leaf blight [NCLB] is our most prominent foliar fungal disease in corn. It has been increasing over the past 15 years or more in Ontario, starting in the southwest and working its way to eastern Ontario,” says Albert Tenuta, plant pathologist with the Ontario Ministry of Agriculture, Food and Rural Affairs (OMAFRA). 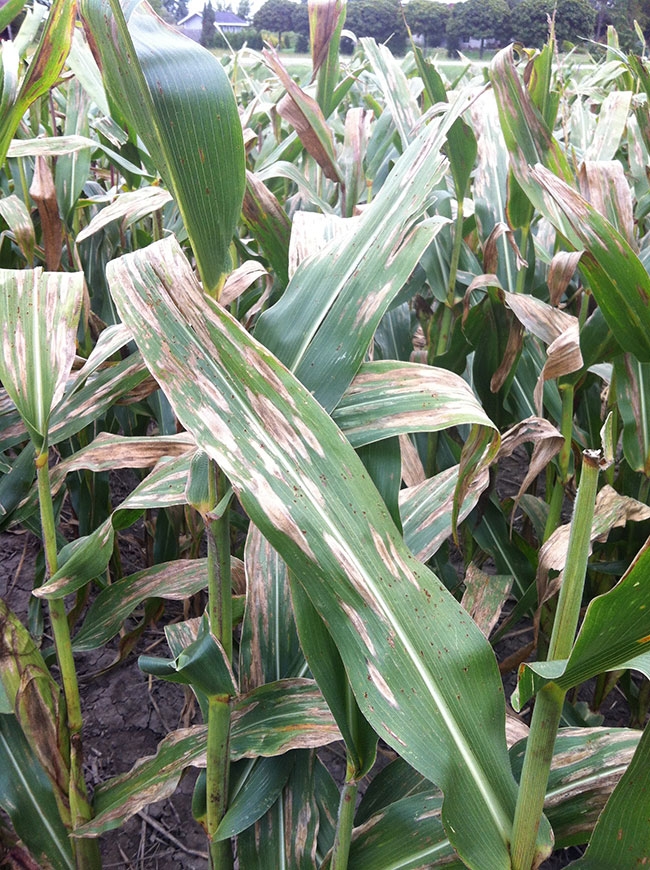 Tenuta has teamed up with Lana Reid at Agriculture and Agri-Food Canada (AAFC) in Ottawa and Dave Hooker at the University of Guelph-Ridgetown in a major NCLB initiative. “This initiative aims to find out what is going on with the pathogen and why we are seeing more of the disease, and to provide effective tools for managing the disease.”

NCLB is caused by the fungus Exserohilum turcicum (also called Setosphaeria turcicax). “The disease has become endemic in Ontario. The pathogen overwinters locally every year, surviving nicely on corn residues,” Tenuta says. “The spores are easily spread by wind and rain splash.” The fungus thrives in wet, humid growing conditions in temperatures between about 18 and 27 C. It produces long, narrow, tan or greyish streaks on corn leaves, resulting in decreased photosynthesis and reduced yields.

“Yield loss can range from light to severe,” notes Tenuta. “It can be quite high – especially if the infection occurs early in the season before tasselling or earlier and particularly on susceptible hybrids. In our inoculated trials at Ridgetown, we could see a 30- or 40-bushel yield loss to northern corn leaf blight in some moderately susceptible lines under normal environmental conditions. In most cases, growers would probably see a potential yield loss of about five to 20 bushels or more.”

Tracking NCLB
One component of the project involves tracking the disease and its races through annual surveys. “We have seen a steady increase in this disease to the point that it is now detected in most corn fields across the province. For instance in 2017, we sampled 231 fields and 190 of those had northern corn leaf blight,” says Tenuta.

“In southwestern Ontario, the presence of the disease is very high; every year, over 90 to 95 per cent of the sampled fields have northern corn leaf blight. And in many cases, the severity has also been trending upwards over time. This past year was a little lighter in terms of the severity because the disease came in a little later than some other years, but the disease was still prominent.”

Krishan Jindal, a plant pathologist in Reid’s group, works on these surveys and on testing the pathogen’s races. To determine the races, the isolates collected during the survey are tested in a greenhouse using a set of corn lines with different NCLB resistance genes,
including Ht1, Ht2, Ht3, Htn1 and Htm1. (They are called “Ht” genes because the pathogen used to be known as Helminthosporium turcicum.) In other greenhouse work, the lines developed in Reid’s corn breeding program are inoculated with the different isolates to evaluate the plants’ responses.

“One of the reasons for the increase in NCLB in the past 15 years is that some races have overcome the main resistance genes used in corn hybrids,” Tenuta explains. “We’ve collected over 677 isolates in our surveys, and we have definitely seen an increase in such races. Some of them can bypass a single resistance gene; that can be managed by simply putting a couple of different resistance genes into a hybrid. But we’re seeing races that can take down two, three, or four genes. And some isolates are able to take down all five resistance genes that we’ve tested. They could be considered ‘super’ northern corn leaf blight for Ontario because none of the five available genes can control them.”

These super-NCLB races are uncommon at present, but their emergence is worrisome. Jindal notes, “We have found 16 isolates that can knock down all five resistance genes. These 16 isolates have been collected from all four regions – we found a few in eastern Ontario, some in southern Ontario, a few in western Ontario and a few in central Ontario.”

“The good news is that we have seen remarkably less injury and infection on hybrids with Ht2 and Ht3. For Ht2, only six per cent [of the isolates can overcome this gene], and for Ht3, only 12 per cent. In combination with the other Ht genes, we can still manage this disease with good
genetics.”

Top-notch inbreds
Reid, along with a biologist in her group, Xiaoyang Zhu, is leading the breeding work on NCLB resistance. She is developing a series of inbred lines with known Ht genes that can be used by private and public breeders to strengthen the resistance packages in their hybrids or further their research.
“We collected different inbred lines of corn that had known northern corn blight resistance genes. A lot of those lines were very late maturing. We crossed them to some of our earlier maturing lines that did or did not have any resistance, and we bred some new lines,” she explains.

The first six of these new inbred lines, identified as CO468 to CO473, were released in January 2018. Reid’s group delayed the release of these inbreds until they had a package of information for seed companies and growers about deploying these genetics, including their performance when crossed with other inbreds to create hybrids.

Reid notes, “With corn, you have to combine different heterotic backgrounds to get the higher yields and heterosis [in the hybrids]. So the first three inbreds – CO468, 69 and 70 – have a stiff stalk background. The other three have a Lancaster background. So we’ve got several that combine quite well with each other for both yield and resistance.”

“Through our race studies, we have determined that you need two different single dominant genes to have good resistance in most fields with a heavy infestation of this fungus. So for most of those inbreds, if you cross them to another inbred that doesn’t have any other resistance genes, then you would get intermediate resistance, which is not great if you have a really heavy epidemic. But if you cross them to something that does have some resistance genes, then you can get excellent resistance,” Reid explains.

The six NCLB inbreds all have other great traits in addition to the Ht genes.

Fungicide evaluation
In another component of the project, Tenuta and Hooker have collaborated on field studies at the University of Guelph-Ridgetown to determine if the various NCLB races react differently to common foliar fungicides used in Ontario corn production. They compared the effectiveness of registered and experimental fungicides on NCLB disease levels in hybrids with low and high
levels of susceptibility.

These fungicide trials have produced welcome news for growers – researchers have seen very good efficacy across the board with the majority of the foliar fungicides available. Details on the fungicide efficacy ratings for NCLB management are available from Tenuta directly.

The fungicide testing, the work on the NCLB races and the resistance breeding program are all making practical contributions to management of this disease.

Funding for the project comes from the Canadian Field Crop Research Alliance, which includes Grain Farmers of Ontario, OMAFRA and AAFC through Growing Forward 2. The Agricultural Adaptation Council assists in the delivery of Growing Forward 2 in Ontario.

Other tools
Tenuta reminds growers of the other tools available for NCLB management. “As with managing any crop disease, the more integrated our management program the better. So not only genetics, which is the cornerstone of effective disease management, and fungicides, but also agronomic practices like scouting and strategies to make the environment less favourable for disease development can all help minimize disease losses in Ontario corn crops.”

“Always get out and scout. If you have had a variety or hybrid that you’ve grown before and you start to notice more disease or increases in other issues, then that is a tell-tale sign that something is going on, such as a breakdown in resistance,” Tenuta says, “Higher plant populations, narrower rows, higher fertility programs – all of those intensive management strategies that help maximize yield can also make conditions more favourable for disease, particularly foliar diseases that are very sensitive to even subtle differences in moisture or humidity. Since NCLB is a residue-borne disease, you can reduce the inoculum load by reducing residue levels. And rotation comes into play too, avoiding corn-on-corn with heavy residues.”

Tenuta also has a suggestion for the corn seed companies: “Down the road, it would help growers if the company descriptions of their different hybrids would identify which northern corn leaf blight resistance genes are present, like what is done with identifying the sources of resistance to diseases like soybean cyst nematode and Phytophthora in soybeans.”