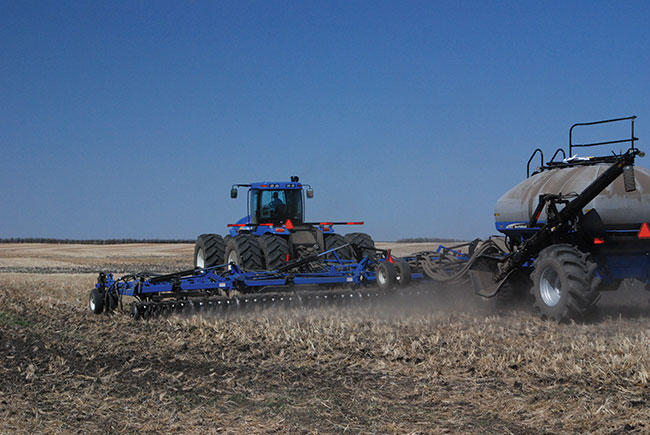 A 10 kg N/ha starter blend in the seedrow was sufficient for fababean, pea, lentil and chickpea. Photo by Bruce Barker.

“Safe seedrow rates for phosphorus and potash have been established for pulses, but tolerance and response to starter blends containing a higher analysis of N along with phosphorus and sulfur was not known,” says Jeff Schoenau, professor of soil fertility at the University of Saskatchewan. “We wanted to look at some of the common starter blends and products to see if there would be a crop response.”

In the greenhouse trial, she collected soil from a loamy textured Brown Chernozem field in southern Saskatchewan. Soybean, green pea, fababean, black bean, small red lentil and desi chickpea were seeded into the soil with a simulated 15 per cent seedbed utilization (1.5-inch opener on 10-inch row spacing) and grown for 30 days under greenhouse conditions.

Overall, the six legume crops showed the following relative sensitivities to crop injury from starter fertilizer placed in the seed row, from most sensitive to least: lentil > pea > chickpea > soybean > black bean > fababean. Lentil, pea and chickpea could generally only tolerate the 10 kg N/ha rates while soybean and black bean could tolerate 10 to 20 kg N/ha.

Fababean emergence appeared relatively unaffected by all three rates of N (10, 20 and 30 kg N/ha) and showed least sensitivity to seedrow fertilizer. In a separate trial, a zero tannin fababean variety had some sensitivity to the 20 and 30 kg N/ha rates of fertilizer application with reduced emergence compared to greater tolerance of higher rates of N in a tannin fababean variety.

“The greenhouse trials come with a caution that the soils were warm with good moisture. There wasn’t a lot of trash and they were low in available nitrogen,” Schoenau says. “Under field conditions, safe seedrow fertilizer rates might be lower.”

The ammonium phosphate sulfate fertilizer products also tended to produce less injury than the equivalent analysis blends when applied at a given N rate.

“For most pulse crops, large amounts of nitrogen really are not necessary as long as inoculation produces good nodulation and nitrogen fixation. The exception may be dry bean because we really don’t have a good inoculant for that crop,” Schoenau says.

Consistent with the controlled environment study, 10 kg of N and 10 kg of P2O5/ha as seed-row placed urea-MAP blend (28-26-0) was sufficient to maximize yield, N fixation and P uptake, but did not significantly reduce emergence, stand count or biological nitrogen fixation.

Another field-scale soybean experiment was conducted near the site where soil was collected for the controlled environment study. A 75:25 blend urea and monoammonium phosphate fertilizer (37-13-0) was applied that produced rates of zero, 17, 34 and 51 kg N/ha and zero, 6, 12 and 18 kg P2O5/ha. A paired row sideband configuration separated the fertilizer from the seed, and was used to limit the potential injury to soybean from the higher rates of N fertilizer. 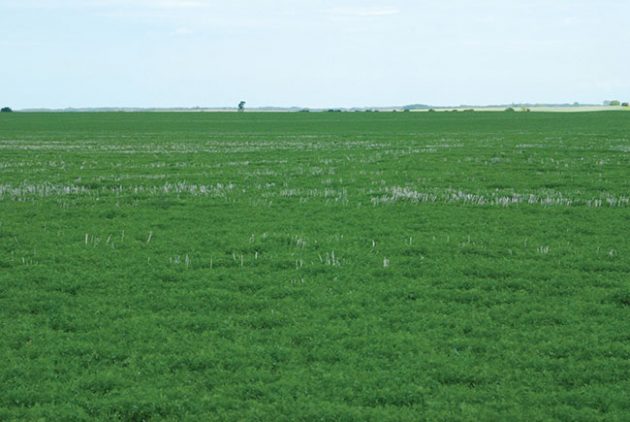 Study results show a starter rate of 10 kg N/ha placed in the seedrow should maximize early-season growth in lentil. Bruce

In this study, poor nodulation was observed throughout the growing season due to drought conditions, which would have limited N fixation. As a result, the highest rate of N (54 kg N/ha) produced the highest soybean yield even though the plant stand was reduced at the high N rate.

Schoenau says that based on the results of Galpottage Dona’s trials, 10 kg N/ha rate of a starter blend placed in the seedrow should be sufficient to maximize fababean, pea, lentil and chickpea early season growth. Higher rates of 20 to 30 kg N/ha in a starter blend may be desirable for black bean and soybean, especially under very low fertility and good moisture conditions.

“Maybe under some conditions with very low soil fertility, there might be a benefit to go with higher rate, but placement separate from the seed row would be the best option for higher rates,” Schoenau says.