Not all roots are created the same, and the differences can be put to good use. That’s what researchers have found at Agriculture and Agri-Food Canada’s (AAFC) Semiarid Prairie Agricultural Research Centre (SPARC) at Swift Current, Sask. Numerous studies since 2006 have shown that most pulses have the majority of their roots between 0 and 60 cm depth, but wheat, canola and mustard can reach deeper.

“We have presented our findings to farmers at quite a few meetings over the years, and many farmers are now using the knowledge of rooting profiles and water use efficiency to plan their rotations,” says research scientist Yantai Gan, who has led many of the studies at SPARC.

An early study in 2006 and 2007 looked at the vertical distribution of root growth in the upper 100 cm of the soil profile for chickpea, lentil, dry pea, napus canola, juncea mustard, flax, and spring wheat. The crops were grown in lysimeters 150 mm in diameter and 1 m long under low- (rainfall only) and high- (rainfall and irrigation) water regimes. Root volume was sampled at five growth stages from the seedling stage through maturity.

Moisture availability also played a role in how deep the crops rooted into the soil profile. Under high moisture, wheat had significantly higher root volume in the 0 to 30 cm depth than the tap-rooted canola and mustard plants. Under drier conditions, wheat, canola and mustard had similar root distribution patterns with greater root volume deeper into the soil profile. Pea had significantly larger root volume in the top 10 cm compared to wheat under dry conditions, but was similar below the 10 cm depth.

Mustard was also a shallow rooted crop with 56 per cent of the mustard roots found above the 20 cm depth in dry conditions, and 43 per cent under good moisture conditions. Gan explains that mustard roots were shown to grow more horizontally under drought. Flax also had the smallest root volumes under all conditions (see Table 1, below).

Water use profiles also studied
In another study conducted from 2008 to 2010 at SPARC, six dry pea, six chickpea, 11 lentil varieties, fababean, dry bean and lupin were grown over the three years. Water use in the soil profile was measured to look for differences in water use efficiencies amongst the crops and varieties.

The research showed pulse plants primarily use water in the top 60 cm of soil during low rainfall years. In the high-rainfall year, little water was extracted by the pulses from below the 30 cm soil depth. When pea was grown, more than 85 mm of water was left in the soil in the 30 to 120 cm depth in wet years, although kabuli chickpea and fababeans stored only 20 mm, showing that they are heavier water users than pea.

Comparing pulse types, Clearfield red lentil had the most residual soil moisture after harvest in the 0 to 120 cm profile in both 2008 (moderate moisture) and 2009 (low moisture), and chickpea the lowest. In the high-rainfall year of 2010, pea and dry bean had the highest residual moisture, and kabuli chickpea, fababean and small green lentil had the lowest. Gan says that in all years, a fairly large amount of residual soil moisture was left in the soil profile by all pulse crops, even in the low-rainfall year of 2009.

Most of the soil water was extracted from the top 30 cm depth, and little was taken from below 60 cm. “The stored water should be available to crops the subsequent year and provides farmers with a good opportunity to plant deep rooted crops to recover the stored soil moisture,” says Gan. (See Table 2, below.)

Putting rooting profiles to good use
Understanding how crop roots grow, and the rooting profiles of various crops can help plan crop rotations to improve WUE over a crop rotation, as well as improve nutrient use efficiency. Rotating deep-rooted crops with shallow rooted ones will help take advantage of moisture and nutrients deeper in the soil profile.

“In drier years, shallow rooted pulses will not have been able to penetrate the deeper soil layers and have not fully used the moisture and some of the macronutrients. The next year, the deeper rooted crops can take advantage of the moisture and nutrients at the lower soil depths,” explains Gan.

Conversely, if a shallow rooted crop was grown in a wet year, moisture may not be the issue, but macronutrients may still be available lower in the soil profile, and deeper rooted crops could be grown to capture those nutrients.

Gan also views the use of short season, shallow rooted pulse crops like pea and lentil as a replacement of conventional summerfallow. He calls this “green” fallow, because it uses a growing crop to replace fallow.

“Pea and lentil have a fairly high water use efficiency and because they are shallow rooted, can leave moisture deeper in the soil profile for subsequent crops. In the case of pea, it is usually harvested at the end of July or early August and provides the opportunity for fall recharge of moisture. Compared to summerfallow, which loses quite a bit of moisture as evaporation, especially in conventional tillage, green fallow can be quite effective in replacing summerfallow,” says Gan.

The research also found that pea has fairly thick roots. Gan believes pea root channels help with water infiltration after harvest, when the roots start to decompose. “I call it micro-tillage, because when we think of tillage, we are disturbing the soil, and that is what these larger roots are doing.” 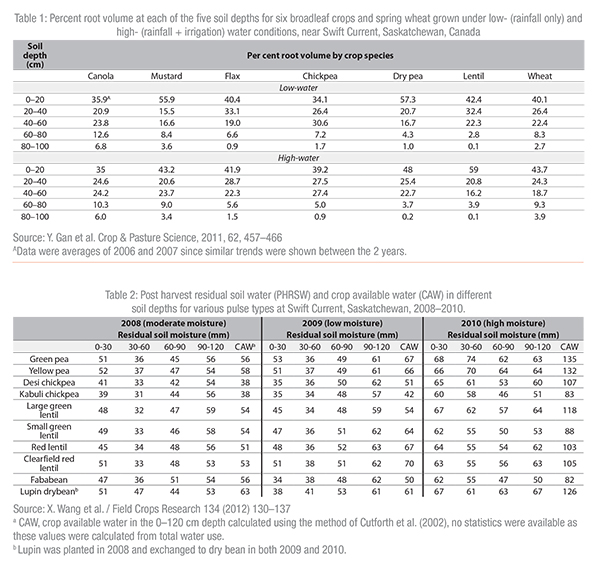 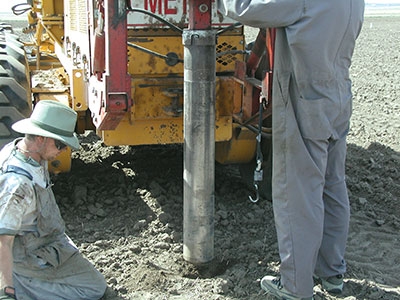 Placing the lysimeter in the soil prior to seeding. Not all roots are created the same