Forage crops are usually considered part of long-term rotations with limitations in annual cropping rotations because of soil moisture depletion. However, researchers and growers are increasingly interested in finding out if shorter-duration perennial forages could be successfully included in rotations with annual crops, and what the impacts would be to yield and quality factors.

Research scientists Dr. Herb Cutforth and Dr. Paul Jefferson at Agriculture and Agri-Food Canada (AAFC) in Swift Current, Saskatchewan, conducted a long-term research trial to determine yield, water use and protein content of spring wheat grown after six years of alfalfa, crested wheatgrass or spring wheat in semiarid southwestern Saskatchewan. In previous studies from the 1960s and 1970s, results showed that growing spring wheat after perennial forages could take four or five years for yield to recover to normal levels.

Soil moisture depletion hurts yield in long-term alfalfa plots
Overall, the research showed that spring wheat yield, water use and water use efficiency were significantly lower in the first year after both alfalfa and crested wheat grass. There were no real differences between the various cultivars.

“In the second year, the yields for wheat after crested wheat grass were similar to those for wheat after spring wheat,” notes Cutforth. “However, it took two years for yields to return to the same as spring wheat on previous alfalfa plots. Without a fallow year in between the forages and spring wheat crops, it may take one additional year to regain equivalent yields, or two years after crested wheat grass and three years after alfalfa.”

“In previous water use studies, alfalfa was found to deplete soil water down to three metres, and to two metres by crested wheatgrass, which is below the rooting depth of most annual crops,” says Cutforth. “In comparison, spring wheat as an annual crop only withdraws soil water to 1.2 metres.”

One interesting finding was that the protein content of wheat was significantly higher when grown after alfalfa than after crested wheat.

Extending research to short-rotation forages
Based on the results of the long-term study, researchers wanted to find out what the impacts would be of including short-duration forages in annual crop rotations. Led by Jefferson, currently VP operations at the Western Beef Development Centre (WBDC) in Humboldt, Saskatchewan, a four-year collaborative project was established in 2010 with plots located at Swift Current with the Wheatland Conservation Area, at Melfort with the Northeast Agriculture Research Foundation, at Saskatoon with Dr. Bruce Coulman, AAFC, and at Lanigan with the WBDC.

“We are taking the long-term results from the Swift Current project and are now trying some short-term legumes in rotation,” says Jefferson. “The newer technologies we are trying to exploit are not just chemical termination of forages, but also zero tillage. We know from the study at Swift Current and from previous studies that a nitrogen (N) benefit is expected, but the question remains of how much.”

Researchers hope at the end of the study to demonstrate to crop and livestock producers that short-term forages can be an alternative for annual crop rotations. “We have examples of livestock producers who rent annual crop land from a neighbour, grow forages for two years, then move to another rental option,” notes Jefferson. “The landowner can return to seeding annual crops, and realize the N benefit the previous two forage crops have produced. Or annual crop growers can include forages in rotation and sell the hay as a crop.

“The project is really to try to get past the old perception that land is either for forages or annual crops, not both,” adds Jefferson. “With the herbicides and seeding equipment we have today, it is easier to get in and out of forages in a crop rotation. We hope to be able to show the benefits of having alfalfa in a crop rotation and that it is a viable crop-rotation alternative. 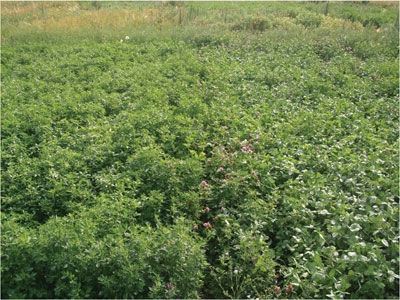