From improving Fusarium head blight forecasting, to providing early warning of the arrival of a virulent stem rust pathogen, to identifying emerging disease issues to be added to crop breeding programs – those are just a few of the possible future uses of a Canada-wide system for monitoring airborne pathogens.

The system is called Aerobiota Monitoring and Forecasting Network, or AeroNet. A pilot project completed in 2013 showed that AeroNet is capable of broad-spectrum monitoring of airborne bacteria and fungal spores. Now AeroNet researchers are working on enhancing the system’s capabilities. And they’re starting on the next step in AeroNet’s development – to build practical applications so that timely, relevant pathogen data could be used by crop growers,
extension agents, researchers and others.

A start in soybean rust monitoring
AeroNet grew out of an innovative system for early detection of Asian soybean rust, a destructive disease spreading into North America. About a decade ago, a large group of U.S. government agencies, along with the Ontario Ministry of Agriculture and Food (OMAF), came together with soybean industry groups and researchers to launch the North American Soybean Rust Monitoring Network. The network’s public website provides real-time monitoring and timely information on soybean rust outbreaks to help growers in making fungicide application decisions.

Dr. Sarah Hambleton with Agriculture and Agri-Food Canada (AAFC) and Albert Tenuta with OMAF were instrumental in getting the Ontario network going in 2005. By 2008 Alberta, Saskatchewan, Manitoba and Quebec also had monitoring sites.

The network uses automated rain and air sampling equipment to collect samples. The airborne organisms found in these samples are analyzed with DNA-based techniques to quickly identify the presence of soybean rust spores.

The network also involves field scouting, sampling and lab analysis to validate the automated sampling system and to watch for other soybean pests. This additional work has led to the identification of other pest issues, like the soybean vein necrosis virus. “In 2011, we noted that some locations in Kent County and Elgin County had unusual browning-purpling-yellowing of the leaves associated with the veins in particular. We identified the problem as soybean vein necrosis virus. That was the first time it had been confirmed in Ontario,” says Tenuta, a crop pathologist and coordinator of the Ontario network.

The information gained from this additional work was one of the things that sparked the AeroNet pilot project. The idea was that perhaps the rain and air sampling equipment and DNA testing could be used to look for much more than just Asian soybean rust spores – perhaps the system could monitor the full range of airborne fungal spores and bacteria.

AeroNet pilot project
“Without the Asian soybean rust monitoring program as a foundation, we would not have started this work. They had already made a significant investment in infrastructure, like setting up the sample collectors, and they had a few years of collecting samples and extracting the DNA to look for Asian soybean rust,” notes Dr. André Lévesque, the AAFC mycologist who is leading AeroNet.

“At the same time, the cost of DNA sequencing had started to plummet. When the first human genome sequence was completed about 10 years ago, the cost of that was $3 billion. Today the cost to sequence a full human genome is getting close to $1,000. That change has been transformative; it’s revolutionary,” he says.

“So we thought here’s an opportunity to exploit new sequencing technology while making use of existing DNA samples already available through the Asian soybean rust system.”

Lévesque’s research team for the pilot project included OMAF’s Tenuta, Hambleton and others from AAFC, as well as people from the National Research Council of Canada and the Canadian Food Inspection Agency. The project received funding and support from a wide variety of sources such as AAFC’s Growing Forward 1, the Canadian Safety and Security Program, the federal Genomics R&D Initiative, and the Canadian Bar Code of Life Network. The Ontario component of the project received support from OMAF and Grain Farmers of Ontario.

The project involved a total of nine sampling sites from Prince Edward Island to British Columbia. It used the same three types of sampling equipment as the rust system: a passive rainfall collector, which is a big funnel that captures rainfall, dust and dirt; an active rain collector, which is a bucket with a lid and an automated system that opens the lid only when rain is falling, to catch clean rain water; and an air sampler, which sucks in air. Most sites have at least two types of sample collectors.

“In each sample, you’ll have hundreds or thousands of different kinds of organisms, so you have many, many genomes in the same sample. So instead of sequencing full genomes, we target one region of the genome – one ‘marker’ – and we sequence that marker across all the different organisms,” explains Lévesque. “Some call this marker a ‘DNA bar code.’ It’s a region of the genome that allows you to separate species. It’s only about 0.001 per cent of the genome, but it’s the same 0.001 per cent of all the organisms in the samples.”

Over the course of the pilot project, the AeroNet team processed 350 air and rain samples from across the country and generated 55 million DNA bar code sequences.

“It is unprecedented to be able to do this kind of thing,” says Lévesque.

Key results
The pilot project showed that this approach works. AeroNet is a rapid, accurate system for detecting, identifying and counting a wide range of airborne organisms sampled directly from the environment.

The project also emphasized that ‘bioinformatics,’ the analysis of biological data, is a big challenge because of the enormous amounts of data generated by sequencing the DNA bar codes for thousands of organisms in every sample. Lévesque notes, “You’re always running out of disk space, running out of computers to run the analysis, and running out of skilled people who can do the programming.”

As a result, the researchers have temporarily paused their data collection efforts and are focusing on developing faster tools for analyzing the data.

The project also highlighted some key gaps in the reference sequences, so the researchers now know where to target their resources for expanding the reference database.

According to Lévesque, those differences likely have to do with the ecology of how the various species disseminate. “When the rain falls, it flushes the air of all the spores and dirt and everything. So in the active rain collector, you are getting a snapshot of the spores in the column of air roughly above the collector, depending on the wind. Some spores fly higher up and will need the rain to bring them down. Some are probably flying lower all the time, so the air samplers, which are just a metre above the ground, can pick them up 24/7. And the passive rain collector continually collects dirt, dust and other particles in the air, along with any rain. In those passive collectors, we picked up things that I would have never thought were in the air – we even picked up nematodes [tiny worm-like organisms].”

Huge potential
“In the future, we want to deliver real-time information to producers – information for forecasting or disease modelling, but also looking at pathogen loads and what species are out there. We’re trying to put all the pieces together that could lead to development of a broad-spectrum airborne pathogen early warning system,” says Tenuta.

“Ideally the system could be established throughout Canada or North America as local networks or regional monitoring systems. This system allows you to not only detect what you have but to watch for new issues, so you can prepare for up-and-coming diseases of concern. You could use it to watch for threats like Ug99, the stem rust pathogen that is of great concern to the wheat industry and is starting to move into different parts of the world. Really, you could use this for any airborne disease problem because it’s based on DNA – as long as you can identify the DNA, you can develop a system.”

Right now, the AeroNet team is starting on the system’s next phase: development of some specific practical applications for use by crop growers.

Tenuta sees many exciting possibilities. “The wonderful thing about being able to assess the risk of airborne diseases early is that it provides ample opportunities for management to be initiated. For instance, it could be used to give growers a heads-up to scout their fields. Or if foliar fungicide applications were necessary, you could do them in a timely fashion, while the disease levels were still low or the disease was still in its early stages, so you could get the most from your fungicide and reduce the potential yield impact.”

The team is currently exploring how to use AeroNet data to improve Fusarium head blight forecasting. “Farmers are already using forecasting systems for diseases like Fusarium head blight and potato late blight. But these systems are strictly based on weather conditions; they just assume the inoculum is present but that is not always true. If farmers had additional data about whether the inoculum is present, then they could plug that information into these forecasting systems to improve the accuracy of the forecasts,” notes Lévesque.

He sees huge potential for AeroNet’s early warning service because it could be used for any crop. He hopes grower associations and other crop industry stakeholders might be interested in partnering with his team to target some priority pathogens, work out how to use the AeroNet data to help growers in managing those pathogens, and develop ways to deliver real-time information to growers.

“We would like to take this system to the next step, including exploring ways to enhance its diagnostic capacity so you could have samples processed within a few days and working out the logistics of rapidly delivering the information to growers,” notes Tenuta.

As well, Tenuta and Lévesque see many other ways AeroNet information might be used. For instance, it could help crop pathologists monitor changing disease patterns, or inform crop breeders about emerging disease issues to address in their breeding programs, or be used as part of public security system to watch for nasty organisms. In addition, researchers from other disciplines are already contacting Lévesque to find out if AeroNet has detected various species of interest and to ask for advice on how to do this kind of monitoring work for their own area of specialization.

So AeroNet has already made substantial progress. And, although there is more work to be done, it looks like the system has the potential to offer some real benefits to crop growers and many others in the years ahead. 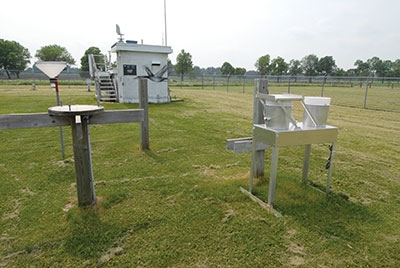 Over the course of the pilot project Advances in DNA tools are enabling monitoring of the full range of airborne crop pathogens.