July 7, 2015, Salford, ON - Salford Group continues to broaden its fertilizer application line with the addition of several new products that come as a result of its recent acquisition of both BBI Spreaders and Valmar Airflo. The global agriculture equipment manufacturer has added two new spreaders and the largest pull-type pneumatic boom applicators on the market to its product offering.

New to the Canadian market are two Salford BBI spreaders, the MagnaSpread Ultra and Javelin. This equipment has previously been distributed through farm equipment dealers in the American market but with increased distribution through the Salford network, the company is now excited to offer this equipment throughout Canada as well. Both featured in the Producer Series, these spreaders are optimized for large-acreage operations, a hallmark of the western Canadian market.

The MagnaSpread Ultra is a massive fertilizer and lime spreader, capable of carrying over 500 cubic feet of product with optional bin extensions. This huge capacity allows the Ultra to cover more acres between fills. To stand up to roughly 14 tons of material while minimizing compaction, the Ultra is equipped with 710/50 R 30.5 tires and a proprietary 20-ton BBI walking beam suspension.

The Javelin, a mid-season, top-dress fertilizer spreader, was the first in North America to broadcast dry material in 120-foot swaths (Urea). This means less time in the field and less soil compaction for large-acreage applications. With greater efficiency overall, the Javelin saves time and fuel costs and brings greater yield potential to farmers.

Salford also welcomes the Salford Valmar 8600 to its product line. Valmar manufactures the only pull-type pneumatic boom fertilizer applicators on the market, with the 8600 being the largest model.

The 8600 gives farmers increased versatility through its 54, 57, 60 and 66 ft. boom widths, standard half-machine shut off, and its option package for metering and tire types.

What sets Salford Valmar applicators apart is the ability to maintain accuracy throughout the width of the boom and achieve an even spread pattern, even in windy conditions. Fan options include a 1000 rpm PTO driven fan or a hydraulically driven 17 in. fan that operates at 4700 rpm.

The 8600 comes equipped with an 8 ton/260 cubic foot hopper, made of 409 stainless steel, which is designed to minimize fill stops and extend the life of the equipment. It can be equipped for two-product delivery, while the addition of an optional meter allows for the application of micronutrients or small seed application like canola or forage crops. The 8600 has a maximum application rate of 1000 lb/ac (Urea) at 8 mph, yet can apply as little as 50 lb/ac at the same speed with a mechanical drive and optional half rate kit. 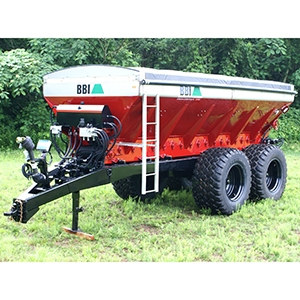