June 15, 2016 - Salford Group unveiled what it says is the largest pull-type pneumatic boom applicator on the planet. The whopping prototype is being shown for the first time in public at Canada's Farm Progress Show this week in Regina. 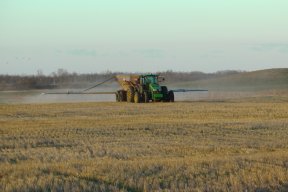 The prototype applicator was originally conceived for the Western Canada market as a large capacity air boom applicator that would combine the benefits of fewer stops for refilling with the wind-resistant nutrient delivery characteristics of an air boom. The concept was first suggested by customers at the 2015 Canada’s Farm Progress Show when both an 8 ton Salford Valmar 8600 pull-type pneumatic boom applicator and a Salford BBI Magna-Spread Ultra spinner spreader with a 480 cu.ft. struck level capacity hopper sat on display in the Salford booth.

Based on this feedback, Salford immediately began planning how it could integrate the 8600 air boom system with the MagnaSpread Ultra hopper and chassis at its Ontario headquarters and R&D center. It also began looking for a western Canadian customer it could partner with for running the initial prototype.

Through the territory manager for the area, Glenn Herperger, Sharpe’s Soil Services Ltd. in Moosomin, Sask. showed interest in the tool for commercial application. The machine would provide a much higher capacity than a commercial floater truck (480 cu-ft stuck capacity vs. 350 cu-ft on a standard floater truck), it can do 14 mph with 66-foot booms which translates into 100 acres an hour, and it would come at a fraction of the cost of a floater truck which typically range from $400,000 to $500,000 or more. Sharpe’s agreed to take delivery of the first prototype for use in their fleet for the fall 2015 application season.

“We completed the design and construction of the first prototype last summer with minimal modification to the MagnaSpread Ultra chassis. The two technologies married together well,” said project manager Brad Baker. “We were also able to use much of the existing hydraulics package from the Ultra. It was even ISObus ready, using a Tee-Jet IC-18 ISObus controller that was already offered with the MagnaSpread Ultra.”

Before delivery, Salford performed testing on the basic functionality of the prototype at its Ontario plant. This included verifying the tool could produce consistent output across the boom swath and the target minimum and maximum rates specified up front could be attained. It also included running the unit in the field to observe boom stability and energy transfer from the frame to the boom over rough terrain.

“Salford is evaluating the product for potential production in the near future,” said Geof Gray, CEO of Salford Group Inc. “It will slot in above the 8600 product line as the flagship series of air boom applicators.”

“I am most proud because it is one of the best examples of the combined efforts of Salford, Valmar and BBI as one coherent, collaborative and innovative organization,” he continued.