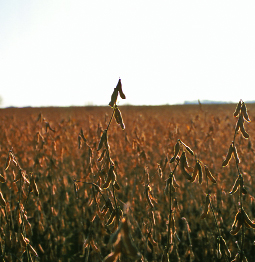 Disease, weed and insect cycles are a perpetual headache for any farmer and this is particularly true for the organic farmer. With limited inputs, the most important management tool is crop rotation. The plain truth is that a well-designed rotation not only makes organic farming possible, it can also work as an effective cost cutter for the conventional farmer.

A cover crop of oats and peas being rolled with a crop roller built at the University of Manitoba farm shop.    Photos By Peter Darbishire.

This was the take home message recently delivered by John Hollinger, organic business development specialist for Manitoba Agriculture, Food and Rural Initiatives at the demonstration farm in Carman. It is here that a six year rotation designed by Dr. Martin Entz of the University of Manitoba has been running for the last four seasons.

“What we’re trying to demonstrate is a practical crop rotation that organic farmers, or any farmers who are interested in sound agronomic practices, can use to produce a crop based on a ‘stockless’ regime,” Hollinger explains. “If you don’t have livestock but you have a rotation like this, it could very well work.”

This ‘stockless’ approach is necessary for straight organic grain farmers since they do not normally have access to manure that can be used as fertilizer. As a result, stockless organic farmers must find a different source of fertilizer for their land. 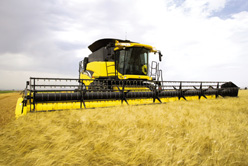 A three-pronged attack
A good rotation, whether it is organic or conventional, employs a three-pronged strategy with the first two prongs aimed at reducing the need for inputs. To begin with, rotations must first address the usual agricultural pests. To do this, a farmer has to anticipate the cycles of diseases and insects and use different crop types to break them up. It also has to include crops that can compete with weeds and, in an ideal system, reduce or even eliminate them.

The second part of the strategy deals with the health and fertility of the soil. A good rotation should help maintain high levels of both organic matter and the micro-organisms that break it down into usable plant nutrients for the next crop generation. “A healthy soil grows healthy plants that can withstand stresses such as drought, bugs, or disease and can compete with weeds a lot better than plants that are not vigorous,” Hollinger says.

The third prong is the economic prong, such as the saving of resources, the marketability of the crop and the resulting profitability of the farm. “So our six year rotation includes cereals, pulses and a green manure every three years.” Hollinger says, “The green manure supplies enough nitrogen to replace what’s being used up by the annual crops.”

The green manure may be a legume, such as a clover, or in this case, hairy vetch. The vetch is a source of organic matter and a source of available nitrogen. “Hairy vetch is one of the best fixers of nitrogen out there and it provides very good competition for the weeds,” Hollinger says. “The seed was bought in Iowa for close to two dollars a pound Canadian and seeded at 20 pounds to the acre, so it’s costing about $40 to seed the field, but you get at least 100 pounds of nitrogen fixed per acre.”

After the vetch was worked in, they planted a cover crop of fall rye. Fall rye may seem an odd choice because there is not a very big organic market for it. However, fall rye exudes certain alkaloid compounds into the soil that inhibit weed germination, especially with small seeded annuals.

“When oats are used as a companion crop with the vetch, as we have in this demonstration, the oats may be used as a green feed or silage, so this crop would be swathed probably sometime in July just as the seeds are starting to fill,” Hollinger says. “You’d get a lot of biomass for green feed or silage that can be sold to cattle farms, then the vetch continues developing and it can be worked into the ground in September.”

On paper, the rotation starts with the green manure to get the soil nitrogen levels up. The next year, either an oilseed such as flax or some other broadleaf crop such as buckwheat is grown. The following year, spring wheat is grown.

Alternating the cereal and broadleaf crops break disease and bug cycles that may be developing. After another green manure year and another cereal crop, a pulse crop such as soybeans can be grown. A cover crop of fall rye after the soybean harvest may help to get row crop weeds under control before going back to a green manure at the start of another six year rotation.

“In 2006, the economics on this particular site showed up pretty well, including those lean years where you just have expenses and no income other than the contribution of the nitrogen,” Hollinger says. “If you figure with a green manure you’re getting a hundred pounds of nitrogen then that’s worth something, especially at today’s prices of fertilizer.”

Farmers wishing to try weed control and fertility through rotation should know that effective rotations are specific to their regions, so what works in Winkler, Manitoba, may not work in the Peace River region. Good record keeping is essential and a good working knowledge of the crop history, climate and soil geography of the farm is important.