This pulse crop can be used in cosmetics, farmed salmon rations, human food and more.

Lupin, one of Alberta’s newest crops, has plenty of potential uses. Now an Edmonton based bioprocessing company called Ceapro Incorporated is capturing some of that potential.

Ceapro produces active ingredients from plants and other renewable resources for use in the health and wellness markets for humans and animals. Using sweet lupin seed provided by Alberta Agriculture and Food, Ceapro has created a lupin peptide extract for use in the cosmetics and personal health care industries.

Fielder notes that hydrolyzed wheat protein and hydrolyzed soy protein are the most commonly used plant extracts in shampoos and conditioners. But that is changing. “More and more companies in the cosmetic industry are shying away from wheat and soy proteins primarily because of allergens that some people are susceptible to. So one of the areas that we’re looking at is to substitute lupin for some of these other peptide extracts.”

To produce the lupin extract, Ceapro dehulls and grinds up lupin seed, and then uses its own patented technologies to extract the protein, break it down into a soluble form and purify it to produce the final product.

“It’s completely water soluble and because it’s a natural extract and very mild, it can be used in a wide range of products.”

He sees a good potential for sales of the lupin peptide extract. “If you consider products like hair shampoos and conditioners, the amounts of peptide extracts are typically high in those products. So it’s usually a high volume market. We feel that this area could grow very rapidly.” 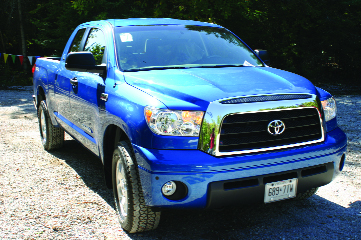 Newco Enterprises is the first company to formulate products for consumers using Ceapro’s lupin extract. This Calgary based company has created high-end skin care products for the cosmetic industry using the lupin extract as well as some of Ceapro’s other extracts.

Ceapro is currently assessing other possible uses for lupin components, ranging from skin care products to pharmacological and veterinary products. “There are many interesting compounds found in lupins. We’ve only touched the surface with the peptide extract,” says Fielder.

Other markets for Alberta lupins?
Lupin is an annual pulse crop with high protein levels, the ability to fix more nitrogen than field pea and a sturdy stem that resists lodging. In 2002, Dr. Stan Blade obtained narrow-leafed lupin varieties from Denmark and Germany suited for production in Alberta’s Parkland and Peace regions. In 2004, a multi-agency team of researchers led by Alberta Agriculture and Food (AAF) started a comprehensive set of projects toward developing commercial lupin production in Alberta. This initiative had many industry partners and funding from the Alberta Crop Industry Development Fund. Projects included agronomics, economics, processing and marketing.

“Seeds of various species of lupin have been used as a food for more than 3000 years around the Mediterranean and for as much as 6000 years in the Andean highlands. Users soaked the seeds in running water to remove most of the bitter – and toxic – alkaloids and then cooked or toasted the seeds or boiled and dried them to make kirku.

The lupin that they used would be a distant relation to one that we’re growing today,” notes Mark Olson, AAF’s Provincial Pulse Industry Development Specialist. The biggest difference is that today’s agricultural varieties are ‘sweet’ lupins, they have been bred to remove the bitter-tasting alkaloids.

“Lupins have been used for absolutely everything,” says Olson. He describes a lupin dinner held by the Association of Applied Botany in Germany in 1918 which included lupin soup, lupin steak fried in lupin oil and spiced with lupin extract, margarine and cheese made with lupin extracts, lupin spirits and lupin coffee, all served on a tablecloth made of lupin fibres.

At present, Australia is the world’s main lupin producer, growing 912,000 tonnes in 2005, about 80 percent of the global production. “The main use for lupins, especially in Australia, has been for ruminant feed. They feed the whole seed to cattle or sheep,” says Olson. “It has high protein, good energy and no starch, so it works very well in ruminant rations.” Lupin is also used in rations for pigs, poultry and fish, although for these uses, the fibrous hull is sometimes removed.

Lupin is used in foods like pastas, breads, cookies and sausages. And it can replace soybean in soy beverages and Asian foods like soya sauce, miso and tempeh, because lupin and soybean are similar. “Based on the whole seed,
soybean is about 38 percent protein and lupin is 37.5 percent. They both have insignificant amounts of starch. And they both have oil, although soybean has more – the whole soybean seed is roughly 20 percent oil, while lupin seed is about seven to nine percent oil,” explains Olson.

Fielder says, “Lupin has a nice balance of the ‘good’ fats that your body can use. The protein has a nice balance of the essential amino acids that are required by your body. A number of studies show some lupin proteins have very good emulsifying and foaming properties, so they could be used in place of egg white, for instance. And lupin has very good water binding properties so it could be used in products like sausages.”

AAF has been working to develop markets for Alberta grown lupin. 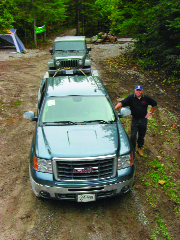 Since lupin is not yet being grown commercially in western Canada, AAF has been providing Alberta lupin seed from its field plots to Ceapro and other companies who want to explore lupin’s potential. As well, AAF’s Dr. Eduardo Beltranena is comparing dehulled lupin with other pulses, like field pea and fababean, in rations for different classes of pigs and poultry.

Agricultural lupin varieties have been bred to remove the alkaloids.
Photo Courtesy Of Mark Olson, Alberta Agriculture and Food.

Nevertheless, two companies made an agreement for 160 acres of lupin to be grown in Alberta in 2007 for the farmed salmon market. Unfortunately the late, wet spring in central and northern Alberta meant that the lupin seed did not get into the ground. 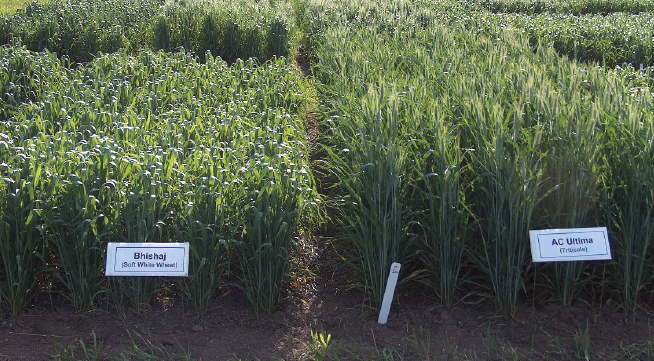 Despite that setback, one of the two companies has started seed multiplication at the pedigreed seed level, so commercial lupin seed should be available in Alberta in three or four years.

Seeds of the three lupin varieties tested in Alberta. The mottled seed is Arabella, the white is Prima and the brown is Rose. Both Arabella and Rose performed well in the Alberta trials. Arabella is currently being commercialized.  Photo Courtesy Of Mark Olson, Alberta Agriculture and Food.

“I think the number one barrier to using lupin right now is getting the hulls off economically,” notes Olson. He says commercial dehulling equipment costs about $25,000 to $30,000, plus costs for bins, spouting, augers and other associated equipment. He hopes some existing operation, like a seed cleaning plant or a grain handling facility, might become interested.

Olson is optimistic about the long-term potential for lupins and many other pulses because they are good for the environment (see Sustainability and the rotational effect) and good for people. Pulse-based foods provide health
benefits like fighting cardiovascular disease, lowering the glycemic index (related to diabetes) and improving bowel health.

He adds, “The Europeans have used lupin in lots of different things for many, many years. I don’t see any reason why we couldn’t do that here. It’s just a matter of a little patience on behalf of growers and hopefully we’ll be able to convince some of our end users to take that bold step to invest in this area.”

Lupin agronomic info coming soon
Olson is working with Ken Lopetinsky of AAF and Sheri Strydhorst at the University of Alberta on a lupin Research Summary 2004-2006 based on the results of the Alberta agronomic studies. It will be released in November 2007.

Olson says, “Ken and Sheri’s agronomic research was second to none, and information based on their results will give Alberta farmers a good foundation for growing lupin.”

Sustainability and the rotational effect
Olson emphasizes that lupins and other annual grain legumes have a key place in sustainable agriculture. “Lupin is second only to fababean in its ability to fix nitrogen. You don’t need to apply nitrogen to these crops. With just 20kg/ha of phosphorus plus a good inoculant, these crops are good to go. They’ll yield quite high and give the next crop quite a boost. The reduction in nitrogen use in the year of growing the legume and in the following year leads to a reduction in greenhouse gas emissions, thus minimizing the ‘energy footprint’.”

But he notes, “There is a bit of a misconception that pulse crops leave nitrogen in the soil for the following crop. In reality, it’s only about eight or 10 percent of the nitrogen requirements for the crop following. The biggest benefit is actually a rotational effect.”

The rotational effect is due to several factors. He says many legumes use water and nutrients efficiently so they tend to leave relatively good supplies of both for the next crop. Another factor is that legumes help to break up
disease, weed and insect pest cycles in the crop rotation. And a third factor is “the area of plant growth promoting bacteria, enhanced disease resistance or growth regulator balance associated with pulse crops that is not well understood.”