Sustainable crop rotations are at the forefront of research.

A canola-wheat rotation has become the most common crop rotation on the Prairies in recent years, driven by high canola returns. But pest, disease and weed resistance issues resulting from this tight rotation means the long term sustainability is questionable. Ongoing research is trying to determine what crop rotations would be most productive, resilient and economical for different ecozones on the Prairies.

The research is being conducted at Beaverlodge, Lacombe and Lethbridge, Alta.; Swift Current, Scott and Melfort, Sask.; and Carman, Man. The final year will be completed at the Carman site in 2022. Six different rotations are being compared, although the crops grown in those rotations vary by location. 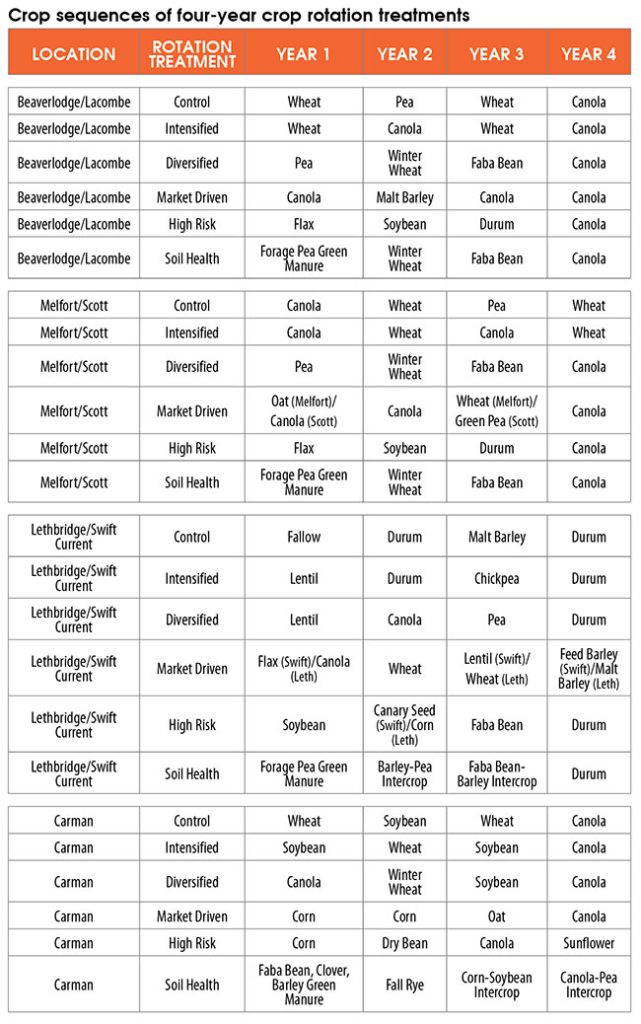 Yield assessed across cropping systems
Kui Liu, a research scientist with AAFC in Swift Current, Sask., says there were significant differences in average system yields, as measured by CEY, across the 27 site-years. The Market-Driven was highest at 2004 kg/ha, which was greater than Intensified (1806 kg/ha) > Control (1630 kg/ha) ≈ Diversified (1603 kg/ha) ≈ High Risk (1517 kg/ha) > Soil Health (1281/kg ha).

The CEY varied by location because of differences in environment and productivity potential. Among the cropping systems, the Control system had the highest annualized CEY at Melfort and the lowest annualized CEY at Swift Current and Lethbridge. No yield in the fallow phase in the Control system explains the lower system yield at Swift Current and Lethbridge, Liu says.

Liu says the Intensified rotation was the most suitable cropping system at Swift Current and can substitute for the control system based on yield and Precipitation Use Efficiency (PUE), grain yield produced per unit of rainfall.

The Diversified was a viable alternative to the control system at Beaverlodge and Lacombe as the two systems had similar yields and PUE and fertilizer use were more efficient in Diversified than control systems.

At Scott and Melfort, Intensified may be an alternative cropping system to the control system as the two systems had similar CEY, Nitrogen Fertilizer Use Efficiency (NFUE), and PUE.

Effect of cropping systems by sites on annualized CEY at the completed fully-phased sites (Melfort, Scott, Swift Current, and Lethbridge)

The Intensified was the most stable cropping system while Market-Driven and High Risk were the least stable systems. The Market-Driven had the highest annualized CEY variation, the highest yield crisis severity in a drought year, and the least stable or most responsive to environmental variations. The lower than average yield and higher than average CV in the High Risk across site-years indicated its vulnerability to changing environmental conditions.

“Overall, the large variation for each cropping system suggested that there is no such single cropping system that can perfectly fit all ecozones. This emphasizes the need to develop site-specific cropping systems according to local soil and weather conditions to fulfil yield potentials and reach the goal of agricultural sustainability,” Liu says.

Strydhorst says to achieve the highest productivity and overall sustainability, the research suggests in high yielding zones, the focus should be on maximizing yields through managing disease and pests. In low yielding zones, the emphasis should be on yield stability through managing abiotic (i.e. temperature, light and water) interactions between crops and the environment.

Liu has applied for funding to carry on the research for another four-year rotation cycle. This will help to show the benefits of longer crop rotations on things like soil health and pest and disease outbreaks.

“A relatively long-term study of two or three four-year rotation cycles is required to evaluate and optimize cropping systems with regard to crop productivity, resource use, pest control, soil health, economic return, and environmental footprint,” Liu says. “Producers might need to take a systems approach when developing and managing their cropping systems. Considering the trade-offs, producers might need to adopt a variety of crop management practices to balance short-term economic returns and long-term sustainability.”