Lentil can boost soil strapped for water and nutrients. 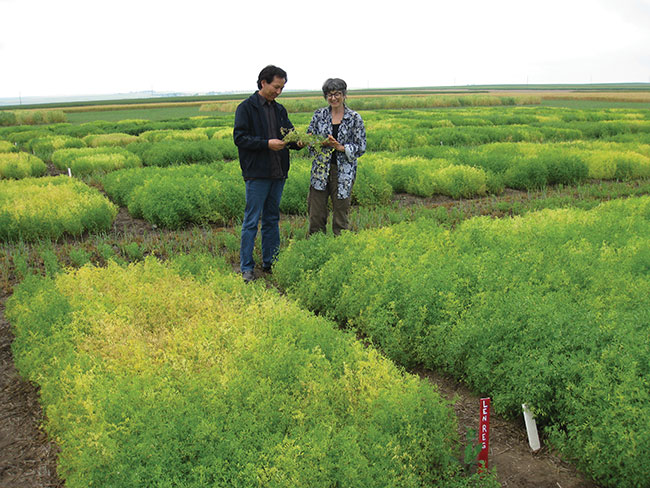 Lentil can enhance the productivity of agroecosystems suffering from lack of water and nutrients, according to new research out of Agriculture and Agri-Food Canada’s Research Centre in Swift Current, Sask.

Yantai Gan, a research scientist specializing in alternative crops and diversification, says lentil is ideally suited to these systems in semiarid areas.

Gan’s research program is focused on helping diversified or alternative cropping systems become more resilient to climate change and various abiotic and biotic stresses. He’s currently studying how farmers can extract maximum benefits from growing combinations of pulse and oilseed crops in place of conventional cereal-based cropping systems. One of the key elements is determining the impact of pulse-based rotation systems, primarily lentil, pea and chickpea, on soil microbiomes in the Canadian Prairies.

In one study that ran over three crop sequence cycles between 2007 and 2011, Gan compared the effect of eight lentil cultivars on soil water, residual soil nitrogen and crop yields to that of continuous cereal and conventional summer fallow systems.

They found lentil-based cropping systems have the potential to boost total grain production over a three-year rotation period by an average of 30 per cent.

Gan’s study, which was funded by Agriculture and Agri-Food Canada and the Saskatchewan Pulse Growers, was set up in crop sequence cycles, meaning the three-year rotation sequences were repeated three times.

In the first year of each cycle, researchers planted hard red spring wheat variety AC Lillian; the following year, eight varieties of lentil from three market classes were planted between rows of standing wheat stubble, along with oilseed flax, barley and a summerfallow check, in a randomized block design with four replicates. In the third year, durum wheat variety AC Strongfield was planted in all plots.

“In the experimental design, the inclusion of barley in the crop sequence created a continuous cereal monoculture system with different cereal species (hard red spring wheat in year one, barley in year two and durum wheat in year three), whereas the inclusion of oilseed flax in the crop sequence provided a system similar to lentil-based systems,” explain the researchers in a paper published in the journal Renewable Agriculture and Food Systems. “The inclusion of these two additional systems allowed us to assess the effectiveness of the lentil-based systems in comparison with the other systems.”

It was important to Gan to study a range of lentil types, so varieties of green and red lentils, as well as large, small and extra-small lentil varieties, were used in the study: Clearfield varieties Impact and Imperial, green lentils Glamis, Laird and Sedley, and red lentils Blaze, Robin and Roulea. 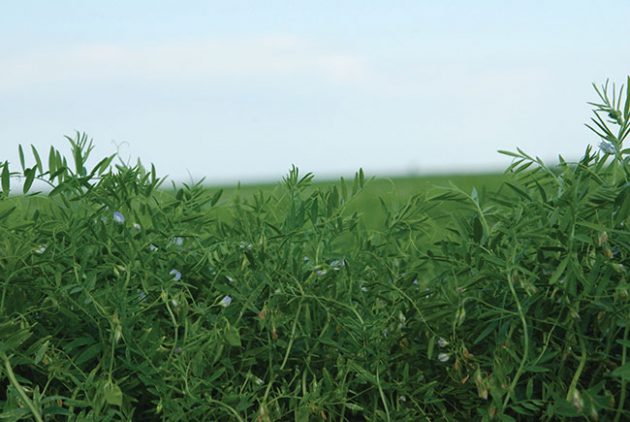 A year of lentil can have a positive effect on the following year’s cereal crop, according to Yantai Gan. Photo by Bruce Barker.

The study demonstrated that lentil can boost soil’s nutrient profile.

Soil available N at spring planting was 44 per cent higher in treatments preceded with lentil compared with those preceded by barley or flax.

Grain production in the three-year rotation averaged roughly 93 bushels per acre (bu/ac) per rotation for the wheat-lentil-durum system and roughly 101 bu/ac for the wheat-cereal-durum monoculture, averaging 36 per cent greater compared with the wheat-summerfallow-durum system. In their publication, the authors conclude the lentil system increased total grain production through the access of residual soil water and biologically fixed N.

Gan is doing similar work with pea in a trial that has run since 2010. He says lentil and pea share similar characteristics in terms of rooting depth in the soil profile, the way they use water and how much nitrogen they can fix from the atmosphere.

For this reason, he believes pea might have the similar beneficial effect as lentil on agroecosystems with limited water and nutrients.

But pea may suit all Western Canadian environments, while lentil is particularly suited to the drier areas such as southern Saskatchewan and southeast Alberta.

Lentil has a characteristic called “indeterminate growth,” meaning if soils have an abundance of water, the crop may continue to grow without maturing, or delay maturing. In drier areas, where there is less precipitation in July and August, the lentil will shut down and mature in time for harvest.

Lentil can fix between 50 and 80 pounds of N per acre from the atmosphere, he says – the equivalent to what a farmer would apply to a lentil crop.

“You save money from nitrogen fertilizer, and these crops also provide a benefit to the soil microbial community, by improving its structure, functionality and diversity,” Gan says. “This improvement of soil characteristics will provide feedback to the crop to be grown in the following year.”

One year of lentil can have a beneficial impact on the following year’s cereal crop, Gan says, and over multiple years in a rotation, pulses can offer larger benefits to the soil. However, some evidence has shown pathogens that cause root rot might also build up in the soil with a high frequency of pulses in the rotation. Thus, a diverse rotation is warranted.